The latest Dada Saheb Phalke awardee is fighting terminal cancer but instead of lamenting the time-limit that has suddenly been imposed on his life, he has decided to live every moment of it

Is Bengal Finance Minister Amit Mitra cleverer than his hapless colleague Dinesh Trivedi? Well, he just may be, considering the way he managed to earn himself kudos from the Bengal chief minister Mamata Banerjee for doing more or less the same thing that the former Railway minister did— that is, trying to increase revenue— for which the latter was so unceremoniously kicked out. Yes, less than a week after an angry Trinamool chief had Trivedi replaced for presenting a Rail Budget that proposed hikes in train fares, which seemed to go against the party’s populist policies, a beaming Mamata applauded Mitra for his first full Budget which he placed in the Bengal Assembly on March 23 for the Fiscal Year 2012-2013. But if you look closely at Mitra’s budget, it’s all about price hike. Only, unlike Trivedi, he didn’t make a huge point about it. Mitra went about it more covertly by re-introducing the “entry tax,” which incidentally was the most salient feature of his budget. Scrapped during the former Left regime so as not to put burden on the common man, the entry tax is levied on goods which enter the state from outside. Bengal being a “consuming” state, it imports a wide range of products including daily food items and consumer durables. So the common man and woman for that matter, has to dish out more for a standard diet comprising fish, onions, pulses and oil, to say nothing of fruits like apples or oranges, much of which come from out outside the state. But then for a state that is reeling under a deficit of Rs 2 lakh crores, left behind by the Left regime, revenue has to be mopped up. Finance minister Mitra knows that. Railway minister Trivedi also knew that in order to get the “Railways out of the ICU” as he famously said, the people would have to pay. The difference? Trivedi made it the point of his Budget. Mitra didn’t.

After Delhi and Mumbai now it’s Calcutta’s turn to glam up its airport. The Netaji Subhash Chandra Bose International Airport, which also houses the domestic terminal, will wear a new look by the middle of this year. The 2,325-crore rupee project has been in the pipeline for several years now and according to airport authorities work has been going on. According to them 94 per cent of the work on the integrated terminal has already been completed. Right now it’s in its finishing stages, with walkalators, escalators, elevators, conveyor belts and other infrastructure being fitted in.

The Sun, the Stars

If you know any Calcutta actors or actresses— unless you are one, that is— ask them to be careful An impostor posing as Bomabay filmmaker Anurag Basu’s agent and calling himself Suraj, has been on the prowl, telephoning unsuspecting targets in Tollywood and telling them that Basu wants to cast them in his films and asking them to mail him their photos and portfolios. When popular Bengali movie star Koel Mallick got such a call she called up Basu to confirm. A shocked Basu asked about it to the only Suraj he knows, an acquaintance in Mumbai, but when the latter denied any knowledge of the incident, Basu let it go. Recently, however, the menace has resurfaced. A starlet by the name of Jhilik received a similar call from the same name. Unfortunately, happy at the thought of being cast by a national director, she sent the man “a whole lot of pictures” of herself, in her own words. Later, she too called up Basu, only to learn that she was the victim of the same hoax. Baus is reportedly at his wit’s end and plans to get to the bottom of it and even take legal action against the fraudster if required. Suraj, leave the stars alone! 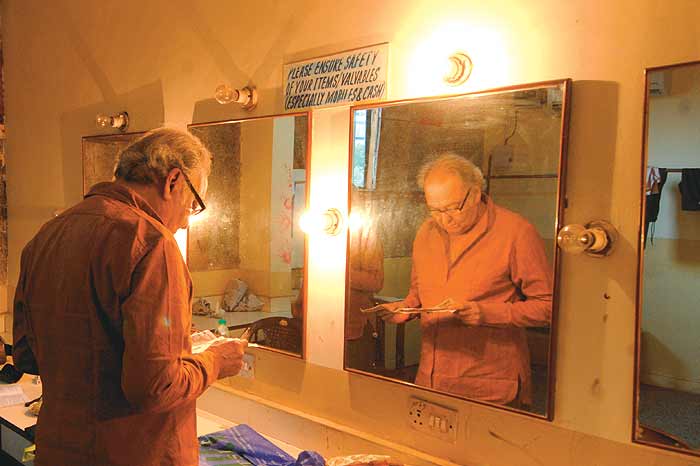 After winning the nation’s most prestigious award for thespians, the Dadasaheb Phalke, veteran actor Saumitra Chatterjee has been busy being congratulated, lauded and of course, interviewed by the media. When he spoke to us, he smiled remembering that we had once requested him to take some photographs for us (For one of our magazine issues we asked those who are used to being in front of the camera to go behind it for a change and capture the world from their perspective). “Do you know that that was the first time I took a photograph?” he asked, smiling like a schoolboy. And I am reminded once again of how humble is this man, who has been called, Ray’s “ray of hope”. Ray being the master, Satyajit Ray of course. Chatterjee acted in 14 of Ray’s films, an achievement which in itself is testimony of his calibre as a thespian. He demonstrated a rare range getting, with equal aplomb, into the skins of as diverse a character as the cerebral detective Feluda in the Feluda movies to the sensitive young man Apu in the Ray trilogy.

Chatterjee also successfully captured the Bengali commercial cinema space, portraying the romantic hero at a time when Uttam Kumar all but held a monopoly. But when you speak to Chatterjee, he almost appears to be oblivious of his achievement and ability and seems sincerely unaffected by the adulation and praise. The highest recognition for actors in India, the Dadasaheb Phalke Award, has evidently had the same effect on him. But while recognition clearly does “get to him”, he says he has always felt grateful. And perhaps it is a great trait of his personality that he does not differentiate between the source of that recognition. “I have always felt elated, even when the common man on the street has come up to me after watching my film or play to say how much they liked me,” he says sincerely.

For the past two years Chatterjee is fighting terminal cancer but instead of lamenting the time-limit that has suddenly been imposed on his life, he has decided to live every moment of it. Apart from penning and producing his own plays, he has been performing as Lear in a Bengali stage adaptation of Shakespeare’s King Lear. I have seen a production of it. Soumitra captures the majesty and vulnerability of the old king as though he were him. The Dadasaheb Phalka seats very well on Soumitra Chatterjee.

Writing on the Wall