Hindsight would perhaps tell Mamata that her public snub to the PM, the FM, the VP and Congress President may actually have left the Congress with no option but to officially announce Mr Pranab Mukherjee's name 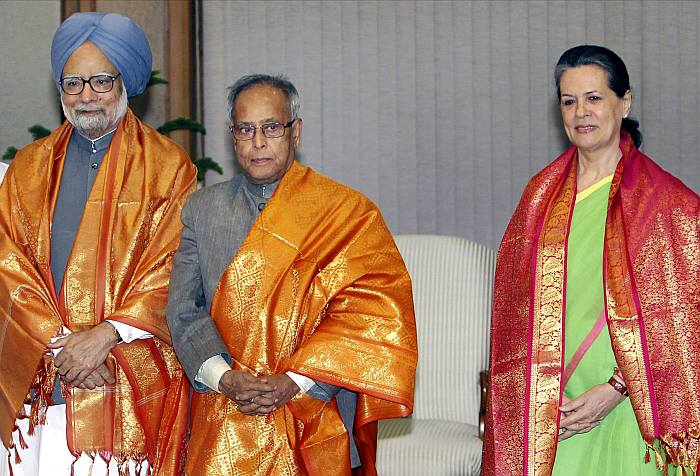 As Fish Are to Bicycles...
So what’s with Mamata? Why is she so het up about who is President? How does it really matter to her? It has been observed that her interest in who becomes the President of India is as relevant as fish are to bicycles (to quote from Irina Dunn, the feminist, who famously said “women need men as much as fish need bicycles” to make a statement about men’s irrelevance in women’s lives.

Before Mamata Banerjee came to power in the state, in the six years or so when her campaign against the Left regimen had gathered momentum, she did often enough demand that President’s rule be imposed in Bengal but that was said more to generate mistrust about the CPIM’s ability to govern than anything else. But even if such an eventuality did take place, would it really have mattered who was President? The Indian President is the formal head of the executive, the legislature and the judiciary but in matters of policy he or she is rarely the decision-maker. The Constitution does vest in the President certain special powers, like clemency powers and the power to pardon, or some discretion as to who to form the government in case of a hung Lok Sabha verdict, but how much of a role is that likely to play in Banerjee’s governance of Bengal or even in her having a hold over central politics? In fact, to contradict Irina Dunn, I think there is still a need for men in the lives of women…at least much more that there is a need for a President of India in the life of a Chief Minister of India. 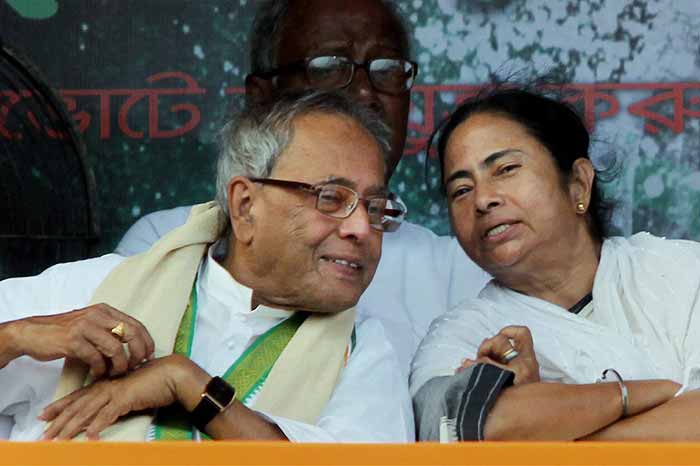 Payback Time
Mamata Banerjee’s objections to the Congress’s choice of Presidential candidate is more about who not to nominate than who to. She has issues with Pranab Mukherjee, the Congress’s first choice, for a number of reasons. Her animosity to the Finance Minister dates back to the time when she was a Congress activist. Rajiv Gandhi liked her. He had differences with Pranab. In fact, it was during Rajiv’s tenure as PM (from 1985 to 1989) that Pranab left the Congress and formed his own party, the Rashtriya Samajwadi Congress, which later merged with the Congress. Pranab may not have been too happy that while he was the one who was responsible for giving Mamata the Jadavpur ticket from which to contest the general elections in 1984 (which she won against Somnath Chatterjee), she was in the Rajiv Gandhi camp. He would have nurtured resentments against her and not treated her with the respect over all these years that is now accorded to her by the nation. Mamata was in revenge mode. This was her time and for those who had ever wronged her—whether she felt slighted by them or humiliated—now was payback time.

In a grand gesture she had also named Somnath Chatterjee as one of her nominations. The former Speaker of the Lok Sabha too has had his moments when Mamata felt belittled (She was called a “jhee” (maid) from the slum who dared to fight a genteel giant during the Mamata-Somnath battle for Jadavpur). And this act of magnanimity on her part, of her deciding to elevate Somnath, smacked of power politics. She wanted to convey the message that she called all the shots now. Her naming Somnath had also a lot to do with finding a Bengali replacement (to allay criticism in Bengal for objecting to the nomination of Pranab, a Bengali). Somnath was also highly acceptable because he had been expelled from the CPIM, her sworn enemy.

Pranab, on the other hand, is close to members of the Bengal Left (In fact, he had called up former Bengal CM Buddhadeb Bhattacharjee and Bengal Left Front chairman Biman Bose during the high drama in Delhi over Presidential nominations). Another reason why he is in her black book. But the reason that the TMC and Mamata Banerjee like to cite for their objection to the Finance Minister is the most convenient one: That he has not paid heed to Mamata’s repeated appeals to grant Bengal a moratorium on interest payment for three years on the debt incurred by the Left. According to them, this is no less than a betrayal since the FM is Bengali.

The Congress knew her antipathy to Mukherjee, and that is why they counted on her ruling his name out, figuring perhaps that they would be thus left with Ansari, someone about whom Mulayam had already made his position clear (by insisting that a bureaucrat would not be acceptable to him). 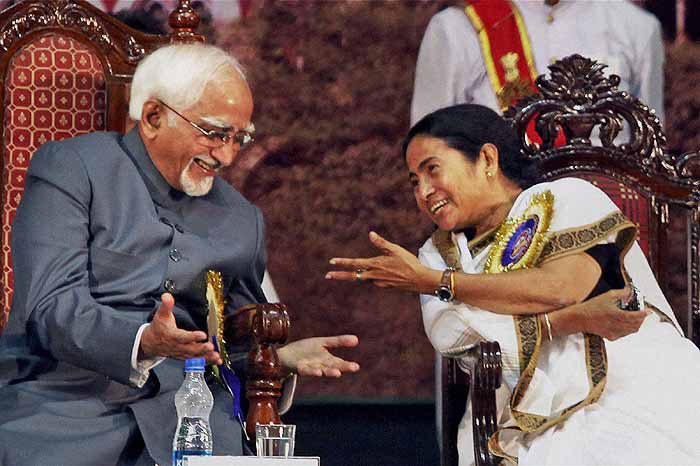 Mamata's objection to the nomination of Vice President Hamid Ansari was his closeness to the Left. And by letting it be known that he was Sonia Gandhi's Choice #2, she managed to effectively deliver a snub to him as well. But she needed to find a suitable Muslim replacement. Who better than former President APJ Abdul Kalam, who has been there done that? But there was a twist in the tale: Sonia would not have someone who had been the NDA’s choice. In this complicated scenario, the most surprising name that surfaced was that of Prime Minister Manmohan Singh. Surely for Singh, this would have been a great honour, if he wasn’t already the PM, that is. The fact that he is the PM turned the compliment on its head and made it into an insult. It has been said that this was Mamata’s way of announcing her dissatisfaction with the PM. Worse, as it now emerges, it was not just Mamata, but even Sonia may have been okay with his nomination, only Mrs. Gandhi never expected that Didi would spill the beans to the media soon after their meeting. Whether Congress wanted to ease out Manmohan Singh or not Mamata Banerjee’s insistence on Pranab not being made President has clearly backfired on her, particularly seeing how Mulayam Singh did a neat U-turn without batting an eyelid.

Hindsight would perhaps tell Mamata that her public snub to the PM, the FM, the VP and Congress President may actually have left the Congress with no option but to officially announce Mr Pranab Mukherjee's name. No wonder Pranabda singled her out as his sister, in his hour of victory, knowing fully well that it was her rebellion that turned the tide in his favour, and smoothened the process for Congress knew that any candidature other than Mukherjee's may have emboldened APJ Kalam to contest which may well have resulted in the non-Congress opposition rallying behind him.

Frogs, Crabs
In Calcutta, Presidential elections never quite generate the kind of discussion that it generated this time around. Perhaps because at no other time has the Bengal chief minister been such a central figure in it. In fact, here in Calcutta it was being referred to as a battle between two Bengalis…Mamata Banerjee and Pranab Mukherjee. And the entry of the name of Somnath Chatterjee completed the triangle. The joke that is circulating on Facebook (the Bengali-version of the tall poppy syndrome joke) is this:

Several crates of frogs were being shipped from India for consumption in the West. All the crates were covered and tightly sealed. Except one. The concerned buyer demanded to know why that particular crate had not been covered.

“Oh don’t worry. That one is from Calcutta,” said the exporter.

“So they are Bengali frogs. One tries to climb up, the rest will pull it down by its leg.” 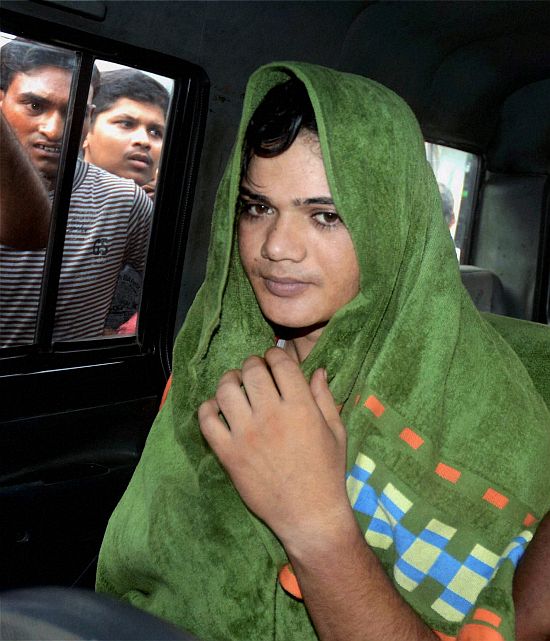 Pinky Pramanik being taken to Barasat Court in North 24 Parganas district of West Bengal after she was arrested by the police on allegations of rape and charges that she is actually male.

Not a Laughing Matter
In other news (and the only news which diverted attention away from the Presidential polls), Pinky Pramanik, an Asian Games gold medallist who won the Women’s 4x400 relay in 2006, was arrested by police when her live-in-girlfriend lodged an FIR claiming that Pinky was actually a man who had raped her. Acting on the complaint of her partner, a woman named Anamika Acharya, officers of Calcutta’s Baguiati police station first took her to the Barasat government hospital for a gender-determination test. Pramanik, who had also won a silver medal at the Commonwealth games in Melbourne in women’s athletics, reportedly refused to take the test, instead accusing Anamika of fabricating the story because she wanted to break up with her. The news has been splashed across the front pages of all the major local dailies. It has generated a great deal of 'general amusement' at Pramanik’s expense. What I find sad is that the 'amusement' is directed at Pramanik because of the obvious confusion about her gender. Though the charges are allegedly based on Pramanik’s alleged refusal to marry Anamika in spite of having promised to do so, surely laughter is not the appropriate response to this news, regardless of whether or not the allegations are true. 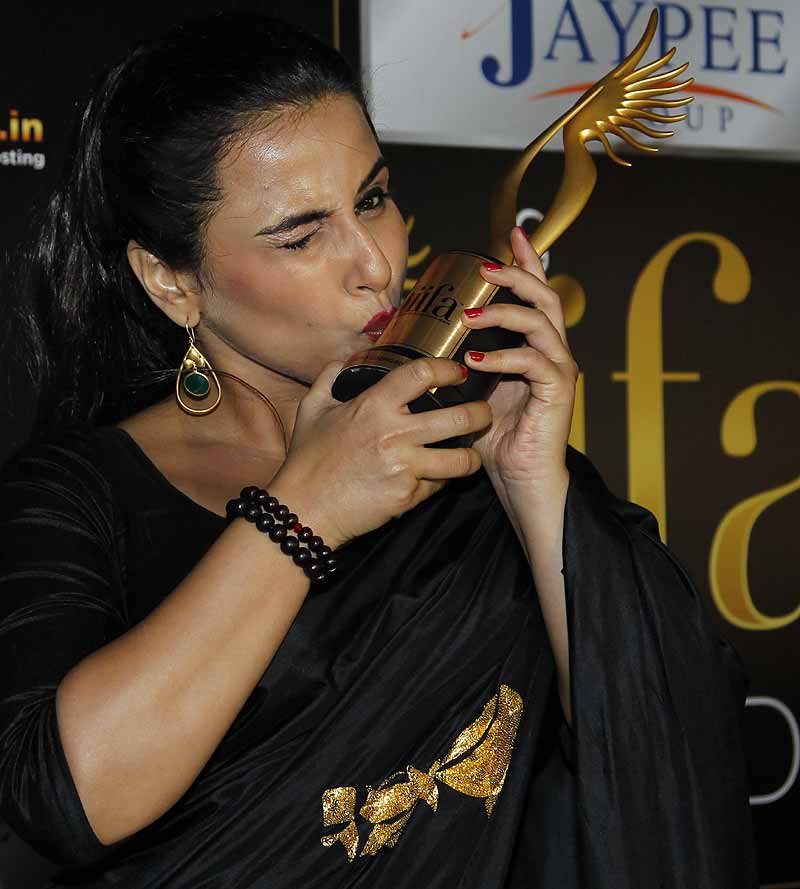 Favourite Destination
After the success of Kahaani which catapulted to national fame a host of little known Bengali actors, Calcutta has suddenly become a favourite destination for Bombay film industry directors hunting for talent. The latest buzz is that a number of actors and actresses have been roped into play various characters in Raj Kumar Gupta’s film, Ghanchakkar starring Vidya (Bidya?) Balan and Emraan Hashmi. Of course, Bengali actors have always played key roles—literally—in Bombay— the likes of Ashok and Kishore Kumar to Sharmilla Tagore, Rakhee and Rani Mukherjee, to name a few. But the difference is that now the cast comprises large numbers of Bengalis even when it’s not a Bengali movie. Perhaps it started with films like Pradip Sarkar’s Parineeta (though there could be others before that) where Raima Sen, Saif Ali Khan (at least half-Bong) and others were cast along with Vidya Balan. Then it moved onto films like Kahaani, which had Dhritiman Chatterjee, Parambrata Chatterjee, Saswata Chatterjee (who played the iconic Bob Biswas) and others playing supporting roles to main actor Vidya Balan (again!). In fact, come to think of it, the phase is not about Bengalis and Bollywood...it’s about Bengalis, Bollywood and Bidya Balan.

Writing on the Wall
A Bengali response to inflation (scribbled on a wall): Aloo-peyaj agoon…Bangla chhere bhagoon…(prices onions and potatoes have gone through the sky…Time to bid Bengal bye bye).