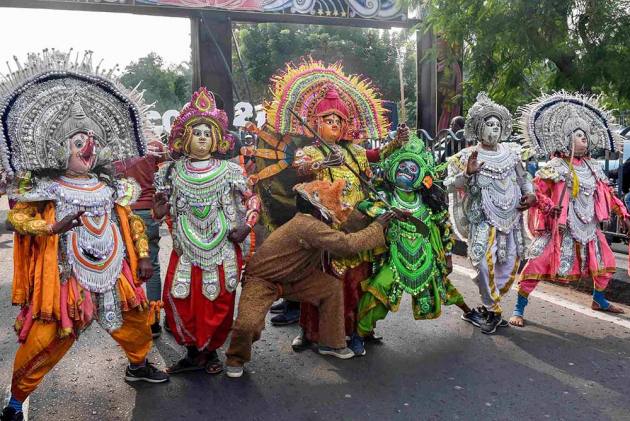 The city of joy witnessed a massive rally , as thousands of residents of Kolkata from all walks of life took to the streets to thank UNESCO for according Intangible Cultural Heritage (ICH) tag to Durga Puja festival.

Participants ranging from Durga Puja organisers to artisans, and people's representatives to common men and women walked the 2 km distance from Academy of Fine Arts to Dorina Crossing in the heart of the city in a colourful rally carrying 'Thank You UNESCO' placards amid sounds of the 'dhak', the traditional drum inseparable from West Bengal's biggest festival.

Rashbehari MLA Debasish Kumar, also a member of Forum for Durgotsab, told reporters, "We have assembled here to celebrate the UNESCO honour to West Bengal’s soul Durga Puja. This is an acknowledgement of Chief Minister Mamata Banerjee's drive to promote the festival globally."

Sculptor Sanatan Dinda said, "I couldn't hold back tears of joy on hearing the great news (of UNESCO tag). West Bengal's Durga Puja has assumed unbelievable aesthetic proportions in terms of creativity while still being rooted in its devotional aspect. It has risen over religious, linguistic barriers and turned out to be a universal festival of humanity."

"The sound of dhak in Aswin (month of Bengali calendar when Durga Puja is celebrated) is now being heard across the globe. Thanks UNESCO," state minister Chandrima Bhattacharya, whose award-winning Hindustan Park Sarbajanin is one of the women-conducted pujas in the city, said.