In California, foreign birth is as common as a traffic light. The presence of many foreign-born candidates on the ballot paper for the state's most important election is something to ponder about not deride.

California’s gubernatorial race is being referred to as a circus with many actors -- 135 to be precise. The recall of Gov. Gray Davis has inspired some obscure and purely puerile candidates to try their luck at the top job in a great celebration of chutzpah that is so American as to leave one breathless. If Indian elections throw up candidates with lively criminal records, California’s recall has given a chance to actors, porn kings, billboard pin-ups, bounty hunters, sumo wrestlers, shrinks and boxers to put their names on the extra long ballot paper. Officials had to draw lots to see whose name will go first.

Two Indian and one Pakistani American are also in the mix, befitting the grand show but their politics and experience are a mystery. Vip Bhola, an attorney from Hollywood, says he is beholden to no special interests and will do what is right. Bright-eyed and eager, Bhola is a Republican who wants to follow fiscally responsible policies to pull California out of the financial hole. It is a $38 billion-deep hole that grows deeper everyday. Vikramjit Bajwa is a real estate man from Sonoma county who filed his nomination but has remained largely anonymous. Then there is Mohammad Arif, a sympathiser of the Pakistan People’s Party, who proudly declares on his website that he is a "certified candidate". His ideas on governance, however, don’t pop up with the same agility on his semi-operational website. But the mere presence of South Asians on the ballot paper is worth noting -- it is yet another step by them toward joining the political mainstream.

Whether California is American mainstream or a fruity, nutty state where the angst-stricken take their pooches to dog shrinks is the question. I think California often leads the way and seems as if the ultracool state, as many times before, may be signaling the shape of the future to the rest of the country and indeed to the world. The multitudes who have registered in the race to be governor represent people’s bursting discontent with the political classes, not just a desire for a naïve adventure trip in a wonderland. At least 30 of the 135 want to fight as independents. There is Larry Flynt, publisher of racy magazines and subject of a fairly good movie on press freedom. There is Gary Coleman, a former child actor. True, many are simply there to see their names on the ballot paper, to experience the thrill of having "fought" an election. But mostly the "mass" filings for the race may signal a desire for a "connection" in these media-soaked times and Internet-seeped lifestyles. 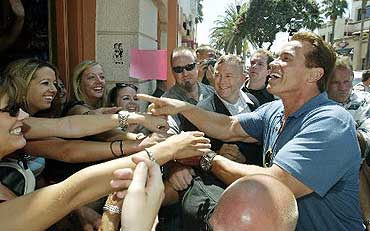 The Terminator tests the waters

Arnold Schwarzenegger's announcement to join the race on a late-night comedy show was a flourish suited to the times. It came after months of speculation and guessing games. Overnight he became a political force to contend with who is now grudgingly being taken seriously by the media too quick to crack the easy jokes. His entry certainly added colour but it also suggested a richness of political resources in the state. Something politically seminal might be happening. Old style politics of cutting deals behind closed doors may be changing.

The immigrant voices are important. Terminator Schwarzenegger and conservative-turned-liberal Arianna Huffington are both first generation immigrants and serious candidates. And both have serious money needed for the race -- he from his movies and she from having married right.Huffington began as a Republican but has slowly evolved into an independent ready to take on "big corporations" and greedy politics of the right. Lest we forget, it was in California that Enron played fast and loose with rules and ethics. Under Bush II, big business just got so brazen that those rich-with-a-heart types like Huffington had difficulty staying the course. So off she went, campaigning against gas-guzzling SUVs and money-guzzling CEOs. Her Greek immigrant antecedents and her coiffed look complete the picture. 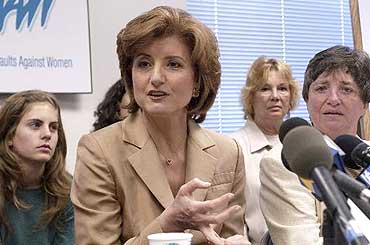 She launched her campaign in a part of Los Angeles that she wouldn’t live in -- the one with graffiti and gangs, where the likes of Spike Lee might set their racially charged movies. While mainstream media and loud talk show hosts can’t stop making fun of her cross over politics, she talks of the excesses of some being responsible for the deficits of many. Republicans worry as they rally behind their foreign-born American -- the terminator and former Mr. Universe. Both Schwarzenegger and Huffington speak with foreign accents, perfectly understandable but a constant source of mirth.

But seriously, how many countries can boast of leaving the election field open to foreign accents? Not the Europeans with their class act and certainly not our bhaiyas in Bharat desh. Sonia Gandhi can wear her designer Andhra and Oriya saris from here to eternity but she knows her Italian birth will forever be a weapon for the parivar types. She can learn "shudh Hindi," even write poetry but she will always be a "foreigner," a target for clever parliamentarians waiting to pounce with a trick or two.

But in California foreign birth is as common as a traffic light. The presence of many foreign-born candidates on the ballot paper for the state’s most important election is something to ponder about not deride.