What can replace the RSS khaki shorts which are so last century? Some suggestions. 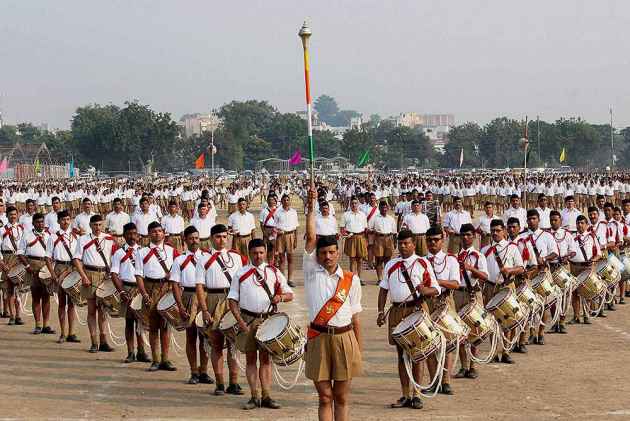 As we all know by now, it is the RSS that calls the shots, blows the bugle, cracks the whip, marks the fouls, plays third umpire and dictates the agenda. In short, they run the Sangh Parivar but all that is getting a little tough to do wearing shorts. And that too Khaki, which is so last century. For the BJP's ideological fountainhead, it is a case of falling short of expectations, in designer terms, hence the need for change. The organisation now feels that shorts are against Indian culture and has been consulting with a host of top designers to see what can very shortly replace the existing uniform. Here are some suggestions.

Sabsachachi: Shorts are actually in but these ones are particularly unstylish. They are pleated which is a definite no-no, and they are also bell bottomed which means they flare out, which is another no-no. It makes even muscular legs look scrawny and the knees stand out like knobs. They have to drop them immediately. I would go for harem trousers in saffron with a pinched waist, tapered at the bottom with gold piping down the side. They will have hundreds of youngsters queuing up to join the organisation, mostly women, mostly my clients, who will be getting it for free.

Barradarzi: The days when you could wake up, pull up your shorts and go out minority bashing are gone. That was prehistoric Yabba Dabba do. Today, you need to do things with a little sophistication and panache. RSS can't any longer hold up its shorts as an example of Hindu pride, it needs to change with the times. I'd say black cargo pants paired with a tight black T shirt will provide the right look, Macho Modern, I call it. After all, if you're looking for world domination by 2020, you can't do it wearing pastel colours and canvas belts and PT shoes.

Mandira Wink: Go hell for leather, I say. Leather is in, even though it seems to be out because of the association with cows and hide. There's nothing to beat the leather look, it will scare the pants off anyone you oppose. I could design a few leather whips for added effect, you know. Just give me a tinkle. Always glad to help, if only to see the end of those ugly shorts.

Rajkare Rathore: I would go for Jodhpur polo pants, you know, the opposite of the RSS shorts since they are flared at the top and tapered at the bottom. We are in 2015 so it's horses for courses. They can keep the white shirt but saffron polo pants with riding boots and spurs will give them the look they are looking for---trendy yet traditional, intimidating and imposing, and look at the branding, riding high!

Jojo Varmani: As a world famous designer, I can offer my global expertise. Monogrammed pinstriped suits are very crass, you need class and subtlety. The RSS stands for purity so I would suggest an all white ensemble with loose pyjama-type pants. The Ninja look. It will do just fine to show you are girding your loins for the big battle. It adds a spiritual element. You see, they need an outward symbol to show why they are a majority that behaves like a minority.

Kapil Sharmanahi: Just drop the shorts guys: you will scare the pants off everybody else.