Calypso Kings On A Roll

Buoyed by the narrow win in Jamaica, the Windies turn the heat on -- pulling India back from 211-3 off 38 overs to 245-9 and the in-form Sarwan (115 n.o.) staving off a late fightback for a four-wicket win with a ball to spare. India paid the price for another sloppy batting performance as the West Indies comfortably overhauled their moderate target for a four-wicket victory in the third one-dayer today.

The Indians made a complete hash of a splendid start provided by back-to-form Virender Sehwag and ended up with a disappointing 245 for nine at the Warner Park.

The West Indians, led by a masterly century by man of the match Ramnaresh Sarwan, kept their cool against some late fightback by the visitors and won with a ball to spare to take a 2-1 lead in the five-match series.

Sarwan, playing his 100th one-dayer, smashed an unbeaten 115 from 119 balls and his composed knock guided the hosts through some tense final moments.

West Indies needed six from Sreesanth's final over, and when Dwayne Bravo (1) was run-out off the second and the third was a dot ball, the equation was down to four runs from the final three balls.

Sarwan thrashed the fourth delivery to extra cover where captain Rahul Dravid misfielded giving the batsman two runs and now it was two required from the final two deliveries.

Sarwan hit the penultimate ball to the extra cover boundary to clinch it for the hosts.

Earlier, Sehwag cracked a brilliant 97 from 82 balls and put on 112 runs with Mohammad Kaif (61) at a run-a-ball rate before the wickets began to fall in a heap.

The Indians were coasting along merrily at 211 for 3 in the 38th over before three run-outs and a few careless shots pulled them down to a moderate total.

The collapse saw India lose six wickets for only 42 runs in the last 15 overs and instead of looking at a figure of 300 and beyond, the tourists were gasping to make it to 250 runs.

While chasing, Sarwan received critical support from Shivnaraine Chanderpaul (58) and their 106-run fifth wicket stand was critical to the West Indies' victory.

The pair came together after skipper Brian Lara (5) had departed to a catch in the slips, his flick off Harbhajan Singh taking the outside edge, and the West Indies had slipped to 131 for 4 in the 29th over.

A critical moment of the innings came when Chanderpaul strained his hamstring muscle in the 32nd over with the score reading 143 for 4.

The doughty left-hander sought a runner instead of returning to the pavilion and it paid handsome dividends as the pair took apart the Indian attack in clinical fashion.

Sarwan also had a 85-run third wicket stand with opener Chris Gayle who made 40 before edging a catch off Ajit Agarkar behind the stumps.

The right-hander, left stranded on 98 in the second match in Kingston on Saturday, suffered no such agony today.

Offie Ramesh Powar (0-59) was to suffer the most from Sarwan who collected boundaries at will off the stocky bowler, including two huge sixes over long on.

India won the toss and chose to bat first on a wicket which was expected to get slower as the day progressed.

Dravid left in the first over when he missed an on-drive against Ian Bradshaw and was ruled out leg before wicket.

Bradshaw also picked up India's second wicket when he clean bowled Suresh Raina though the innings by then had acquired a momentum through Sehwag.

The right hander reached his half century off just 43 balls with seven fours and one six as he took a heavy toll of the West Indies' opening bowlers.

Even though India lost two early wickets, they had raced to 91 for 2 at the 15-over stage. 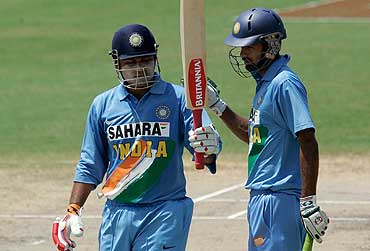 Kaif was an able foil and the two put on a century stand for the third wicket off only 99 balls.

Sehwag made a dash towards his century as he lofted Bravo out of the ground and then banged Chris Gayle over the long-off fence.

He then swatted a four off Bravo past the wicketkeeper but was then ruled out leg before wicket which hit his outstretched boot, way down the track but well in the line of stumps.

Sehwag took only 82 balls to raise 97 runs with nine fours and three sixes.

Still there was no sign of an imminent collapse as Kaif and new-man Mahinder Singh Dhoni went about collecting their singles without much ado.

A couple of run-outs in quick succession however were to change the scenario completely.

Dhoni (15) started the rot when he chose to go for a run off a misfield by bowler Gayle who recovered in time to throw down the non-striker's end.

Kaif was cross with himself when he made the ground but his bat was up in the air when wicketkeeper Carlton Baugh Jr broke the stumps.

Irfan Pathan played too early at a Marlon Samuels off-break and spooned a return catch to the bowler while Powar was horrified to see a Ramnaresh Sarwan leg-spin miss his sweep and roll down to his stumps off his pads.

The third run-out of the innings was amateurish, to say the least.

Agarkar made a drive back to the non-striker's end and took off for a single even as the ball had deflected only a couple of feet leaving no option to Venugopala Rao but to saunter down the track without any purpose.