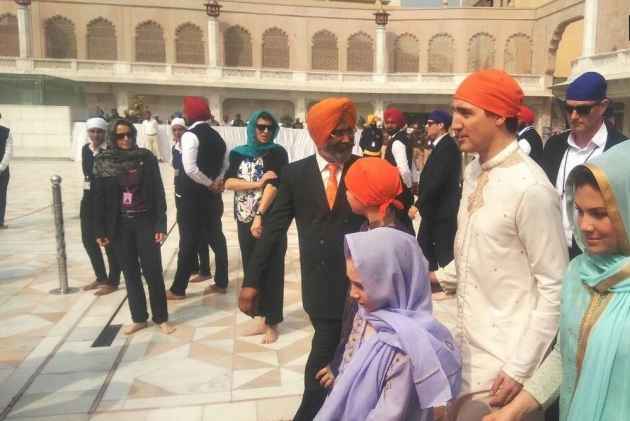 Union minister of state (Independent Charge) for Housing and Urban Affairs Hardeep Singh Puri and Punjab Cultural Affairs and Tourism Minister Navjot Singh Sidhu received Trudeau and a delegation of Canadian ministers and MPs at the Sri Guru Ramdas International Airport at around 10:40 am.

At the airport, they were also accompanied by the Amritsar Commissioner of Police S S Srivastva and the Deputy Commissioner Kamaldeep Singh Sangha, officials said.

Tight security arrangements have been made by the Punjab Police in Amritsar with over 1,500 cops being deployed in the holy city. Senior police officials including SSPs and DIGs, besides the SWAT (Special Weapons and Tactics) team, have also been deployed.

Trudeau will pay obeisance at the Golden Temple, the holiest of Sikh shrines, during his about an hour-long stay there. The Canadian premier will also visit the Partition Museum.

After paying obeisance at the 'Harmandir Sahib', popularly known as the Golden Temple, Trudeau will meet Punjab Chief Minister Captain Amarinder Singh for a one-on-one meeting at a local hotel. The two are expected to discuss business as well as people-to-people ties.

The SGPC, the apex religious body of the Sikhs, has organized a special event in the honour of Trudeau. It will present him with a Siropa (robe of honour), a gold-plated replica of the Golden Temple, shawl, gold plated-kirpan (ceremonial dagger) and religious books at the information centre, an SGPC official said.

The Punjab government has asked the state administration to roll out the red carpet to the dignitaries.