There is no more callous, matlabi and blindered creature than a modern art-apparatchik, I suspect not just in Navi Delhi but all over this sorry planet... 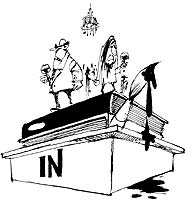 So, there you have a typical Embassy Party, high ceilings, tapestries, supercilious waiters more protective of their masters’ canapés and wine than the host Diplos themselves, the crowd separating into ‘power’, ‘journo’ and ‘artists’, like ghee or oil separating from the gravy, no one circle talking to the other more than strictly necessary, even though the excuse for the latest Canapé Parsimony Convention is that the artists are exhibiting under the aegis of the embassy and the journos are here to write and tell the populace about the happy temporary marriage taking place between Government Emissaries and Slaves of Expressive Creativity.

Ho-hum, another oft-repeated Delhi scenario, I hear you saying, but no—this was here, where Dillittante has temporarily pitched his gazebo, in one of the so-called mega-villes of the world, and the Embassy was that of an important European cultural power that is not French. What was perhaps more amusing than amazing was that the form of the lunch did not stray an iota from a thousand similar events in Delhi: the medium-tepid reception of duty-bharoing dipsomats forced to deal with a crowd they considered mildly weird and unstable, i.e. arteesht-taips, with the drinks and the meal that followed all perfectly civil and nutritious but lacking in any psychic or intellectual substance.

The question is, what ‘substance’ can you expect from people who are not basically in the ‘art business’, people who are doing this party ritual for no reason except that it brings some intangibly reflected kudos to the country and government doing the canapé-protection? What can you expect in this scenario from bureaucrats who’ve been specifically designed to deal with other bureaucrats and with politicians and businessmen, when even the so-called professional art-admin types, such as curators and museum bosses themselves have the most minimalist of social skills? Because, (with the firm exception of a few of my good friends) there is no more callous, matlabi and blindered creature than a modern art-apparatchik, I suspect not just in Navi Delhi but all over this sorry planet.

Most of all, there is a gross lack of understanding and lack, more criminally, of a desire to understand and discover the artists/filmmakers/sundry creativity-types with whom the apparatchik is supposed to be in dialogue. This is perfect both for the indifferent diplomat and the despo-art-wannabe who’s trying to get the sale, the commission, the trip abroad. Both types of creatures look to this Kuratosaurus and abreact differently with mostly quite ghastly results.

But then, why should we complain? We in Delburgh are doing quite well out of the whole, sick fandango; or at least, doing no worse than sorry arty-jokers in this here town where I’m watching the river flow.