Cannabis Effect On Cocktail of Festive Colours At Krishna Country

To be quiet in the boisterous Vrindavan Holi crowd is like submitting yourself to all eventualities. The bhang, though, can be pacifying—more so when bucketfuls of coloured water topple your hat and the smart monkey snatches away the goggles 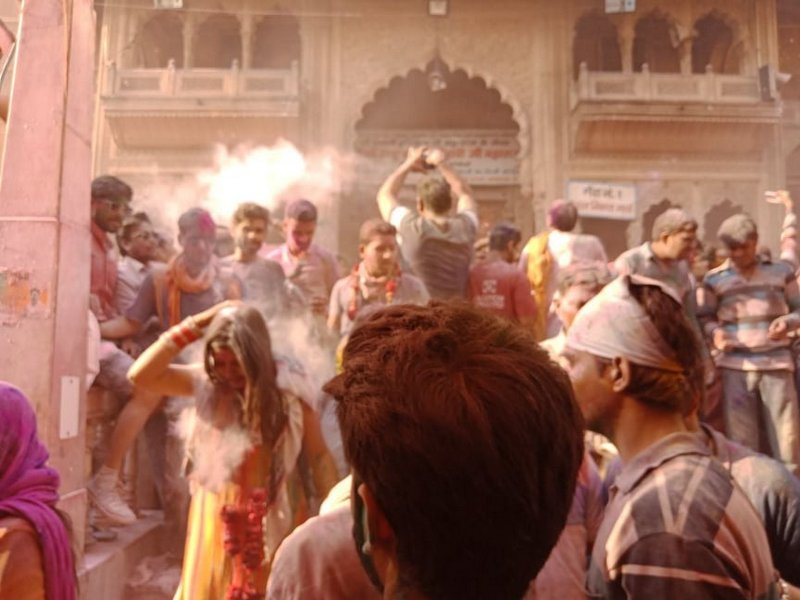 Much before nearing the imposing Banke Bihari Mandir that is pivotal to Holi revelry in Vrindavan, the morning crowd had turned colourful. Literally. For, none will be spared of a multi-hued powder-wash while walking down the alleyways leading to the vintage Krishna shrine. The Radhe Radhe chants hailing the lord’s milkmaid lover rent the nippy 9 o’clock air that is to soon warm up on a day that effectively marks the end of winter.

There isn’t much of open space in the temple’s front yard that is venue to the unrestrained celebrations on a raised platform. For us, two mere viewers, a tapering gateway of four storeys qualified for a grand backdrop. If the main idol inside gracefully strikes a tri-bent posture called tribhanga, not different is ours—only that we are perched awkwardly on the ledge of a shop whose young keeper sports a benign smile that had brightened a selfie.

Raised mobile phones form a grand forest of hands, but they are far sparse compared to the horizontal arms busy throwing gulal—the powder in half-a-dozen shades, primarily pink. It’s a frenzied activity that will continue for hours at a stretch, symbolising the mythological incident of Krishna’s mother smearing colours on petite Radha after the herd-boy complained about his dark skin. Today, again, it’s a leveller: on Holi, each soul in the entire gulal-smeared sea looks the same along this western Uttar Pradesh plain that boasts of several hallowed locales once peopled with those Purana characters.

Banke Bihari, which was established five centuries ago by poet-musician Swami Haridas who taught composer-vocalist Tansen of Mughal emperor Akbar, is just one temple in a long list of Holi-revelry spots in and around Vrindavan. So Vijayan Punnathur and I thought of a surfing trip that would give us peek to a broader festival picture, if not deeper. A surge in people by then had choked the narrow lanes that should have appeared like shiny caterpillars for those splashing colours at us from the slender windows of their houses above. At one stage, when there were revellers equally keen to walk opposite our direction, we feared the prospect of a stampede along the red sandstone pavement. That was when a grimy T-point was seen selling light-green juice. The eagerness with which men of all ages were buying it being poured into translucent plastic cups made it clear this was no ordinary stuff. “Ji, bhang,” clarified a stranger, about the thick liquid prepared out of the psychoactive marijuana. Vijayettan, 12 years elder to me and on the verge of retirement from government job in our city of Delhi, winked an eye at me. I smiled back. The deal was struck: we’re to try this holy prasad now.

A tumbler each for Rs 10. Cool and sweet, with a slight pudina-like tang to it. Round the next corner was a thin passage, sufficiently crammed. Yet it beckoned us for no apparent reason. Off we strode, and then it happened. My spectacles were snatched away. A decent-sized monkey held it in his hands and had begun lackadaisically chewing both earpieces of the device, without which I could still see it seated above us on a slab. Helpful locals intervened as usual; advised us to fetch a Frooti for the simian. Another 10 rupees, this time on the mango juice I bought from an adjoining shack. I throw it up for my lesser friend, he drops me down my glasses that I catch like a hungry refugee would for food. This guy has succeeded in doing
what I didn’t at the temple: pray. Outside, on a broader path, a large cow stood lost, its entire body dripping colours. Two dogs spotted green patches on their forehead, while even the pigs, cats and goats—as we saw later—bore the Holi hues. Apparently, we had circled instead of moving linearly; for, we were again in front of Banke Bihari Mandir. The ever-naughty Krishna has let the hemp inside us working; there was no trace of disgust in us.

Finally, just as we got onto the right track, one in a group of early-teen boys came to us, chanting Radhe Radhe. I anticipated a color-burst in my face. But this pair of powder-filled hands chose to respectfully run across my cheeks upward. Just as it touched my head, he lifted my newly-bought Rajasthani topi and fled. His friends protested, but the kid was beyond reach in a jiffy. Then, as we had walked a few metres down, someone came running to me from behind. This looked like another boy—a benign czar. He returned my yellow-red- green cap I had bought from Mathura after a round to Gokul the previous evening. I might have worn it for another half an hour when a battery-run vehicle was taking us to Nidhivan, the legendary Krishna-Gopis dance garden. All down that three-km ride, we were virtually attacked with violent splashes of violet water and generous handfuls of gulal. Some of the raids left me blind and blank for a few seconds.

Sometime in between these, I had again lost my topi—this time for good. We didn’t revolt event remotely. The bhang supposedly cures speech imperfections, but I noticed I had begun stammering a bit. I first took it for my non-fluency in Hindi, but noted myself struggling in Malayalam that shared the dialect of my travel-mate—also from the same central-Kerala taluk. Nidhivan conjured up clusters of roofed venues where eunuchs vied with men and
women in gay-abandon dance to loud music. Beyond it flowed the Yamuna—contrastingly calm under an azure sky in the afternoon.

Across its brief watery stretches, families sat on boat-rides that least interested the matted-hair sadhus looking the other way. The sunlight was beginning to tire us a bit, and one of the babas told us that ‘Vijay Bhaskar’ was the password for bhang along this bank of the river.

At a neighbourhood shop we asked for it with the suitable secretive tone, but what the boy gave us looked like a cheap variety of an addictive mouth freshener. A couple of hundred metres, a roadside cart had people thronging: the green water there gave us a sense of déjà vu—it required no code to get the bhang. Two glasses each, Rs 40 in all. A sad row of crumbling historical structures overlooking the Yamuna had along it beggars chanting Radhe Radhe and seeking alms. Not far from them, people of all ages continued playing Holi. Some rushed to us holding aloft steel buckets that actually had nothing inside—that was their style of prank. As if emboldened by such harmless final phase of the revelry, the odd policeman rode on a bike, with his pillion, also in khaki, wielding a long lathi.

By the side of a dhaba downtown, not far from our budget hotel, a shop displayed Rajasthani topis. This time I bought three—what’s more, I ensured they reached safe our apartment on the banks of the same river, but upstream and in the national capital. “But these can’t still be exactly your souvenir from Vrindavan Holi,” Vijayettan said with a smirk, packing his gulal-hued topi. In fact, unlike with me, much of the colours stuck to Vijayettan’s face and hands even after bath.

Back, our three-wheeler ride to dusk-time Mathura station was boringly sober.