Cannot Be In Situation Where It Is Difficult To Implement Laws: Rijiju

One cannot be in a situation where it becomes difficult to implement laws passed by the legislature and verdicts delivered by the judiciary, Union Law Minister Kiren Rijiju said here on Saturday. 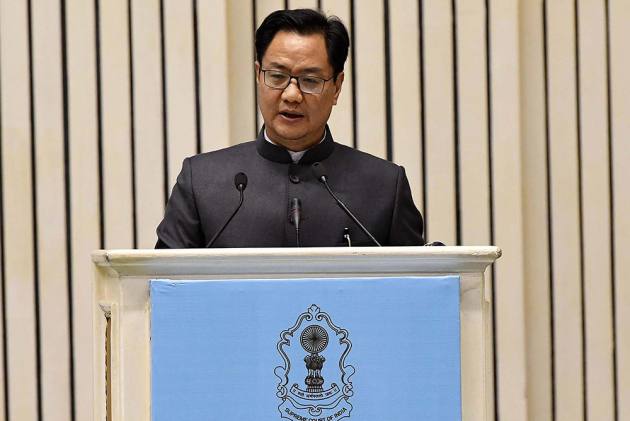 At times, in a bid to seek their rights, people forget about the rights of others as well as their own duties, he said, addressing the concluding session of the two-day Constitution Day programme organised by the Supreme Court.

There is a need to find a balance between fundamental rights and fundamental duties, the minister added. He noted that bills passed by Parliament and state legislatures, and verdicts delivered by the Supreme Court are the laws of the land.

"We cannot be in a situation where it becomes difficult to implement laws despite being passed by the Supreme Court, or high courts or Assembly and Parliament... we all have to ponder over it ... Legislature, judiciary, executive, all sections of the society have to think as the country is run as per the Constitution," Rijiju said in Hindi.

President Ram Nath Kovind, Chief Justice of India N V Ramana and judges of the Supreme Court and high courts were present on the occasion. The minister's remark came ahead of the Winter Session of Parliament, which begins on Monday, where the government has listed a bill to repeal the three farm laws.

The repeal of the three legislations has been one of the key demands of around 40 farmer unions protesting against the reforms for nearly a year now.

On November 19, Prime Minister Narendra Modi announced the withdrawal of the three laws, saying the government could not convince the protesting farmers about their benefits. He had also urged them to end the protest and return home.