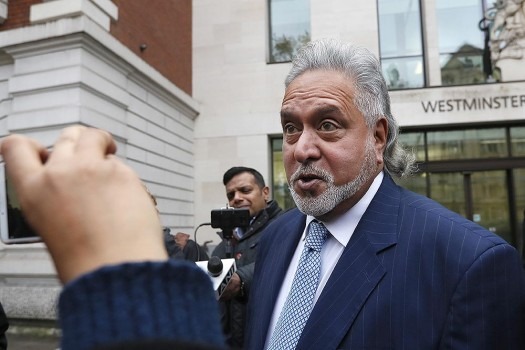 Liquor baron Vijay Mallya's extradition trial proceedings at the Westminster Magiustrates' Court on Tuesday saw a dramatic turn as the defence today dismissed as "zero" the Indian government's case against him, saying it has no credible case to show that the tycoon's now-defunct Kingfisher Airline's borrowings were fraudulent or that he had no intention to pay back the loans.

The 61-year-old liquor baron, wanted in India on charges of fraud and money laundering allegedly amounting to around Rs 9,000 crores, was in the dock at Westminster Magistrates' Court for his defence, headed by barrister Clare Montgomery.

The defence team concluded the second day's proceedings at the trial by calling into question the "admissibility" of the evidence submitted by the Crown Prosecution Service (CPS), arguing on behalf of the Indian government.

It was claimed that the evidence was "contentious" without any underlying material to support claims being made.

"There is virtually nothing by way of direct evidence by way of anyone with direct knowledge of the discussions," said barrister Clare Montgomery who is leading Mallya's defence.

Mallya will return to the dock at Westminster Magistrates' Court in London on Thursday after a non-sitting day tomorrow.

During the course of laying out their opening arguments, his defence team also launched attacks on the Central Bureau of Investigation (CBI) and the Enforcement Directorate (ED), saying the agencies are often influenced by their "political masters from time to time".

"CBI has a long and inglorious history in being politically motivated in cases... With a direct correlation between allegations of corruptions and election years," Montgomery said.

She termed India's prison system as worse than that in Russia, a country where extradition cases hinge on unsafe prison conditions.

Describing the situation in Russia as a "lot better than India" because they at least allow international experts to review breaches of court orders, Montgomery dismissed representations provided by the Indian government of the safety of the prison where Mallya is to be held if he was to be extradited because there was "simply no mechanism to secure compliance" with the assurances.

Both the issues are expected to be discussed in detail as witnesses are deposed through the course of the trial, which will go on until next week.

Earlier, the defence opened its arguments by stating that there was no evidence to support the fraud case and repeatedly used "nonsense" and "nonsensical" words in reference to the fraud claims laid out by the Crown Prosecution Service (CPS), which is arguing on behalf of the Indian government.

Dismissing the government of India's case as "clutching at straws", the defence said the arguments laid out were "financially incoherent" and that there had been no "concealment" and nothing to suggest Mallya was being "intentionally fraudulent".

Montgomery claimed that the evidence presented by the CPS, on the opening day of his extradition trial yesterday, amounted to "zero", which she said was a "critical failing on the part of government of India".

She claimed that the government does not have a credible case to support the argument that the borrowing by Mallya was fraudulent and he had no intention to pay back the loans he sought because his profit projections for loss-making Kingfisher Airlines were unreliable.

"The reality is that the profitability of an airline depends on economic factors, which are largely cyclical and largely out of the control of the airline itself," she said.

The defence deposed its first witness, aviation expert Dr Humphreys, who elaborated on several factors outside the control of an airline that could lead to its demise.

Asked by the CPS if the demise of Kingfisher Airlines during the period of the IDBI loan acquisition in 2009 was "inevitable", he said that there was a big shake-up expected in the airline industry in India at the time but what form it would take would be a matter for debate.

"There was considerable excess capacity in the Indian market... One or more airlines would have to go bankrupt and of that Kingfisher Airlines was a distinct possibility," said Humphreys, drawing on his experience having worked with UK- based airline Virgin Group.

Indicating that it would be plausible to conclude that any loan default was the result of "business failure", Montgomery presented internal company assessments and bank documents to prove that all numbers related to the struggling airline were known to the bankers and there was "no attempt to mislead by over-valuing the worth of the brand".

"It is simply economically and legally impossible to palm losses on to banks or by borrowing," she added as she went about addressing what she termed as the "three-legged structure laid out by CPS" in its case for fraud against Mallya.

Montgomery also claimed that there was a "poverty of material" to support the prosecution's contention that Mallya misused the proceeds from the bank loans to pay off the rent on his private jet.

The defence admitted there had been a massive falling out between the banks and Kingfisher Airlines by 2012-13, when the banks were allegedly leaking information that they were not going to support the business at a critical point for the airline trying to avoid being grounded.

Montgomery claimed that the opening up of India's aviation sector to foreign investors around that time was a "belated decision" by the Indian government and ended up benefiting Kingfisher’s main competitor Jet Airways, which secured a tie-up with Emirates.

All Mallya tried to do during that period of "bitterly fought litigation" in the Indian courts was not borne out of "deliberate dishonesty" but instead a "desire to fight his own corner", it was claimed.

The defence’s opening arguments rested on countering the Indian government's assertion that Mallya is a fraudster who was out to make "gains for himself and cause a loss for banks".

It claimed that in fact the "reality" was that at the end of the sequence of events, the tycoon ended up with a massive personal liability and had "lost control of the jewel in his corporate crown – the UB Group".

The defence has also indicated that in due course it will establish that there "has been political interference" with the prosecution process in a way that is "improper".

The prosecution yesterday had laid out what it termed as "three chapters of dishonesty" by the former Kingfisher Airlines boss – the first being misrepresentations to various banks to acquire loans, then how he misused the money and finally his conduct after the banks recalled the loans.

"Instead of acting as an honest person and doing what he could to meet his obligations, he sets about erecting lines of defence," CPS barrister Mark Summers had said.

The charge of money laundering, for which Mallya had been re-arrested in October, is being focussed on by the CPS less at this stage.

Summers told the court that the Indian government says there are reasons why a court can conclude that the bank loans at the centre of the fraud case were ones the "defendant (Mallya) never intended to repay".

While Kingfisher Airlines and the airline industry were in "intensive care", Mallya chose to palm off the losses to banks, in particular state-owned banks.

The opening day's proceedings were concluded with an assertion by the CPS that it had "shown by virtue of evidence a prima facie case" against Mallya and the hearing should now move to the next phase of any "bars to extradition".

The next phase is when factors such as prison conditions in India are likely to take centre-stage.

The CPS had earlier admitted that there may have been "irregularities" in the internal processes of the banks sanctioning some of those loans but that would be a question to be dealt with at a later stage in India.

"The focus of our case will be on his (Mallya's) conduct and how he misled the bank and misused the proceeds," Summers said, as he presented a detailed chronology of events with specific focus on a loan sought by Kingfisher Airlines from IDBI bank in November 2009.

Mallya, who was arrested by Scotland Yard on an extradition warrant in April this year, has been out on bail on a bond worth 650,000 pounds.

His trial is scheduled to end on December 14, with Wednesday and Friday marked as non-sitting days.

A timeframe for a judgement in the case, being presided over by Judge Emma Louise Arbuthnot, will be determined only at the end of the trial and once the closing arguments have been made.

The tycoon has been on self-imposed exile in the UK since he left India on March 2, 2016.

If the judge rules in favour of extradition at the end of the trial, the UK home secretary must order Mallya's extradition within two months.

However, the case can go through a series of appeals in higher UK courts before arriving at a conclusion.