The centre's announcement signifies the realization of New Delhi that its military strategy has not worked in Kashmir, Mirwaiz Umer Farooq tells Outlook. 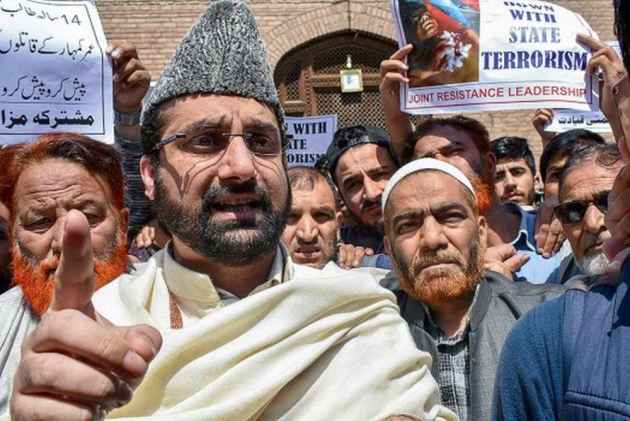 As the central government announced to stop operations against militants in Kashmir during the holy month of Ramzan, moderate separatist leader Mirwaiz Umer Farooq tells why he rejects it, and what Kashmir, according to him, expects from the government,  in an exclusive interview with Outlook's Naseer Ganai.

Why do you describe the government’s move to stop operations in the month of Ramzan a cosmetic and cruel joke?

Because we see it is just a pause in the killing of Kashmiris. After Ramadan, the pause button will be released and the killings will play once again. It also reflects how Kashmiri lives are at the mercy of more than eight lakh troops stationed here who enjoy complete immunity from any accountability through laws like Armed Forces Special Powers Act and can kill at will.

The move to stop operations in the month of Ramazan has come at a time when New Delhi has not any international pressure on Kashmir.

The government of India may not be facing ostensible international pressure but surely New Delhi has realized that its military strategy has not worked. It has not been unable to break the resolve of the people from demanding their basic political right. In fact the more the military repression the more peoples resistance to it. Kashmiris are no longer afraid. They have rejected fear in the face of extreme military repression. Today, more the forces kill the armed youth, more stand up ready to join in. There is greater and wider public support for them. In fact, things have come to such a pass that civilian protestors are willing to sacrifice their lives to help save the lives of these armed youth.

Government argues that it has appointed an interlocutor for the political process. Does any such appointment makes any difference and why Hurriyat rejects such initiatives?

Interlocutor for what?  What is his mandate? What’s his assignment? What is his appointment aimed to achieve? We need clarity on these basic questions if there has to be an engagement. Appointing people with ambiguity about their purpose is seen by people and leadership as a ploy just to buy time and give an impression that “something “ is going on, while at the same time employing extreme force to repress people and choke all space and manner of dissent. It is being hypocritical.

You have been calling for CBMs (Composite Dialogue Process) like revocation of the AFSPA, release of political prisoners as CBMs for dialogue. Do you think any such steps, if taken, will facilitate the dialogue process?

Yes, definitely these CBMs can go a long way in building trust and facilitating a process of conflict resolution over Kashmir. Kashmir issue is fundamentally political with a humanitarian angle to it. It needs political engagement and resolution in the backdrop of compassion and justice.

Both India and Pakistan are going for elections either this year or next year. Do you think there is any possibility of initiation of the dialogue between the two countries in the election year?

The possibility for peace and conflict resolution is always there. Both countries just need to have the desire and willingness for that. Kashmiri people are living a life of uncertainty and repression and as a consequence are suffering a lot. We want an end to it. Like all people, we want peace and normalcy in our lives. Our struggle is not against people of India but for the fulfilment of our fundamental right to decide our destiny. A right granted to all nations including India and Pakistan who exercised it in1947. We were promised the same by the leadership of both countries at the UN. We are just asking, please implement it.