A bit like Deewar, a lot like Namak Haraam. With Jha one would have expected a lot more complexity than what’s delivered. 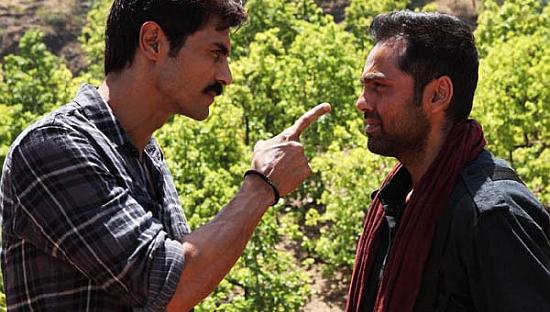 With Chakravyuh Prakash Jha focuses on yet another contentious issue facing the nation. That of Naxalism. The film is about big corporate houses claiming the land of poor tribals and plundering of the mineral resources and how tribals are left with few options other than taking to violence for survival. Jha plays it straight and raw. As he lays out the field in the first half, there’s a promise of something compelling ahead. But soon that comes undone. All you get to know of Naxalism is what you’d have already gleaned time and again from newspaper headlines than the detailed articles that follow below them. Turning Nandigram to Nandighat and Vedanta to Mahanta doesn’t quite make the film any more authentic or in-depth. In fact, in an effort to reach out to the masses, Chakravyuh gets reduced to just a dramatic confrontation between two close friends caught on either side of the divide with cop Adil (Rampal) upholding the political/social institutions and Kabir (Deol) taking on an anti-establishment stance. A bit like Deewar, a lot like Namak Haraam. In all this the narrative grip weakens, the real issue gets lost, most characters end up feeling like caricatures, specially the politicians, and you are left watching a forgettable item number with Sameera Reddy doing the bump and grind routine. With Jha one would have expected a lot more complexity than what’s delivered. In retrospect a film like Red Alert The War Within seems far more layered.