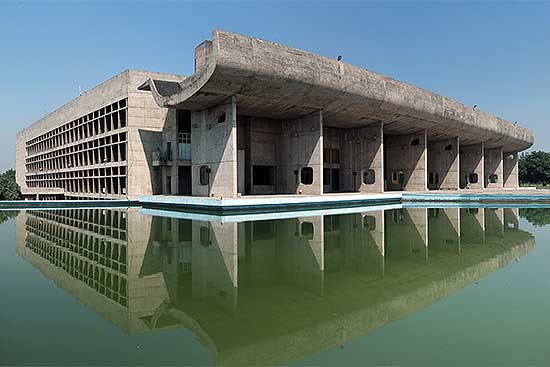 The long awaited Chandigarh International Airport that was finally dedicated to the public by none other than Prime Minister Narendra Modi himself. As with all things shared commonly by Punjab and Haryana, there is bickering over the new airport, its name in this case.

The dispute over its name is as old as the project itself. In 2009 the Punjab Vidhan Sabha passed a non official resolution that chose its name as Shaheed-e-Azam Sardar Bhagat Singh International Airport. The Punjab government is also keen to suffix Mohali to its name to cement its association with Punjab. Mohali is a Punjab district contiguous with Chandigarh and land from here had to be taken for the project because that available in the Union Territory of Chandigarh was insufficient.

But Haryana wants it to be just Chandigarh International Airport without anything in the nomenclature that could suggest an association with Punjab. Previous chief minister Bhupinder Singh Hooda had even opposed naming it after Bhagat Singh but the Manohar Lal Khattar BJP government is not averse to naming it after a martyr.

Many thought that with Modi’s arrival to inaugurate the airport, the dispute would finally get resolved. But nothing of the kind happened. The issue remains as ambiguous as ever and we still do not know what really is the right name of the new international airport terminal. Perhaps it does not matter much, because last heard, the civil aviation ministry was struggling to find airlines willing to run international flights from here. When someone suggested that maybe those from Amritsar airport could be diverted to Chandigarh, Punjab’s deputy chief minister Sukhbir Badal said nothing of the sort should happen.

Chandigarh City is abuzz with anticipation as the process to get UNESCO heritage status for its showpiece Capitol complex designed by the famed French architect Le Corbusier is reaching the penultimate stage. It is a ‘Transborder Serial Nomination’ as part of Corbusier’s architectural works in seven countries -- that includes buildings in France, Belgium, Argentina and Switzerland. And, as Corbusier’s largest creation – a whole city –Chandigarh or rather its Capitol complex is in line to get the tag.

The complex is the head of the city located in the North, which houses the seats of the three major arms of government -- the Vidhan Sabha complex and the Civil Secretariat and the High Court, in addition to a few other minor buildings. In the run up to a formal inspection of the city and its Capitol Complex by the UNESCO team expected anytime this month, the Chandigarh administration has begun a dialogue with its residents called ‘Samvaad’ spread over five days to discuss and invite solutions, suggestions to manage and preserve the city in accordance with Corbusier’s vision. Last year after several years of dithering by the Union Culture Ministry, the dossier asking for heritage status was submitted to UNESCO by the government and it was accepted soon after. The dossier has a section on how the Chandigarh administration proposes to manage and conserve Corbusier’s unique legacy which, given the fact that it is a living, breathing city, is not the same as preserving a building.

The Chandigarh capitol complex will be among 13 sites in seven countries that have Corbusier’s stamp on them. After years of ennui, during which many of Corbusier’s regulations to preserve the city’s character stand flouted because they could not withstand the march of urbanisation, the impending visit by the heritage committee of the UNESCO has fired up the administration and the denizens of the city “about the value of what they have.” For instance the heritage walks of the capitol complex (now conducted thrice a day) are drawing good crowds. A sun dial that was originally in Corbusier’s plans but never got constructed is also being made now. So are some other small structures in the Capitol complex.

But there is still uncertainty over whether the Governor’s Palace that Corbusier had envisaged as part of the capitol complex should be made. Drawings of the structure are there but the city now has not one but two Governors. Chandigarh was meant to be the capital of Punjab, but the state of Punjab itself got divided into three in 1966 and the bickering that ensued over sharing of territory and river waters ended up with Chandigarh as the joint capital of Punjab and Haryana. So who should occupy the Governor’s palace if it is to be constructed? Conscious of the political minefield that the issue is sure to become and its potential to derail the prestigious status for Chandigarh, the Heritage Committee of the Chandigarh administration has postponed a decision by taking the view that since the process for ‘heritage status’ is underway, and the UNESCO committee is coming to inspect, it is best to shelve it for later. A dominant view is that with both the Governor’s well accommodated in suitable government housing, does the city need a palace at all?