Arvind Kejriwal is awarded the prestigious award for 2006 for ' activating the right-to-information movement at the grassroots, empowering New Delhi's poorest citizens to fight corruption by holding government accountable to the people.' 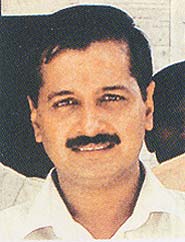 The brazen corruption of the high and the mighty may grab headlines, but for ordinary people it is the ubiquity of everyday corruption that weighs heaviest. And that demoralizes. Arvind Kejriwal, founder of India’s Parivartan, understands this, which is why his campaign for change begins with the small things.

As a tax officer with the Indian Revenue Service, Arvind Kejriwal became aware of the many powers that tax officials held over private citizens and how easily these powers could be abused. Indeed, at the tax department, one expected to pay bribes as a matter of course. With a few kindred spirits, Kejriwal began to strategize about how to bring an end to this. In 2000, he founded Parivartan, meaning "change." Parivartan appealed to the tax commissioner to make the tax department more transparent and less capricious. When this failed, it filed Public Interest Litigation directing the department to implement a five-point transparency plan. Eventually, Parivartan held a nonviolent protest, or satyagraha, outside the chief commissioner’s office. Threat of another protest with the press on hand convinced the tax chief to implement the reforms.

Meanwhile, on leave from his job, Kejriwal stationed himself with other Parivartan members outside the electricity department. There they exhorted visitors not to pay bribes and offered to facilitate their dealings with the department for free. Since then, Parivartan has settled 2,500 grievances with the electricity department on behalf of individuals. Some seven hundred more have benefited from the group’s "Don’t pay bribes!" campaign at the tax department.

Under the Delhi Right to Information Act of 2001, every citizen possesses the right to inspect government documents. Kejriwal put the new law to use in Sundernagari, a New Delhi slum where Parivartan was working among the poor. First, the group obtained official reports on all recent public-works projects in the area. Next, it led residents in a "social audit" of sixty-eight projects, stirring the community to action with neighborhood meetings and street plays. Then, in a large public hearing, the residents presented their findings and exposed misappropriations in sixty-four of the projects—embezzlement to the tune of seven million rupees! Today, in Sundernagari, local committees monitor public-works projects block by block, and no project may begin until the details of the contract have been made public.

The Indian government provides subsidized rations of wheat and rice to poor people through neighborhood ration shops. Records acquired by Kejriwal for Sundernagari revealed high levels of theft in the system. In one area, over 90 percent of the grain ration was being skimmed off by shopkeepers in collusion with certain food department officials. When Parivartan investigated this, one of its team members was savagely attacked. In protest, more than five thousand residents of the community held a month-long "rations fast." This and a mass rally riveted public attention, and foot-dragging officials finally moved to clean up the system.

Now in its seventh year, Parivartan has only ten full-time members. Although Kejriwal sometimes takes on larger issues—such as the successful 2005 campaign challenging a water-privatization plan for New Delhi—he has no plans to expand. He prefers to coordinate Parivartan’s efforts with other like-minded NGOs across India.

Thirty-eight-year-old Kejriwal reminds Indians that the boons of collective action, such as the honest delivery of services, have already been paid for through taxes. Citizens are entitled to them. The spirit of his movement was aptly captured by the women of Sundernagari as they rallied to protest cheating in neighborhood ration shops: "We are not begging from anyone!" they chanted. "We are demanding our rights."

In electing Arvind Kejriwal to receive the 2006 Ramon Magsaysay Award for Emergent Leadership, the board of trustees recognizes his activating India’s right-to-information movement at the grassroots, empowering New Delhi’s poorest citizens to fight corruption by holding government accountable to the people.