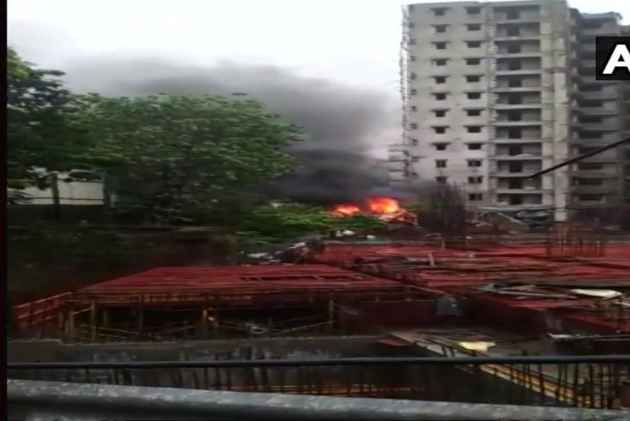 More stories from A Special Correspondent
View All

In a tragic incident today afternoon,‌ a chartered aircraft crashed at an under construction site in suburban Mumbai. Five people, including a padestrain, died and three others injured in the accident.
According to police, the incident took place around 1.16 pm when the aircraft, carrying four people had taken off from Juhu airport for a test flight, which crashed at the construction site situated at Old Malik Estate near telephone exchange and Prithvi building on Jeev Daya Lane in Ghatkopar (W).
Present in the aircraft were two pilots and an AME (Annual Maintainance Engineers) as well as a technician namely Captain Pradeep Rajput, a female Captain Mariya, AME Surbhi and Manish Pandey (Technician). Padestrain's identity has yet not been identified as it was completely charred, police said adding that the injured are identified as Luvkush Kumar and Naresh Kumar Nishad (24), Lovekush Kumar (21) and Prashant Mahakal (23). All the injured are stable.
At around 1.36 pm the fire brigade reached the spot and doused the fire by 1.40 pm, added police. Officials from Mumbai Fire Brigade (MFB) as well as police personnel from Ghatkopar police station recovered four dead bodies from the debris at the crash site. Also, a padestrain died on the spot when the plane's burning part fell on him, informed ACP (Traffic) Vinayak Vast.
Injured as well as the dead bodies were taken to Rajawadi hospital in Ghatkopar (E).
Sources in the aviation informed that King Air C-90 (VT-UPZ) aircraft belonged to UY Aviation Pvt Ltd company. The UY company had bought this aircraft, which had a capacity of carrying 12 people, from UP Govt in year 2014.
After an hour of the accident, the DGCA team reached on the crash spot for prelimenary investigation, police said adding that AAIB will perform detailed probe into the accident.
Meanwhile, three fire engines, a jumbo water tanker and around seven ambulances from 108 services had reached the spot.
Prima facie, it seems that the accident occurred due to technical glitch in plane, said police adding that the precise reasons can be said only after a detailed probe by the concerned aviation experts.