"Someone running a relentless tirade against me that I am up to grab something. This country will follow its own course but I'm sorry and I can't deal with this PIL," said Justice Chelameswar who is “going to retire in a few days”. 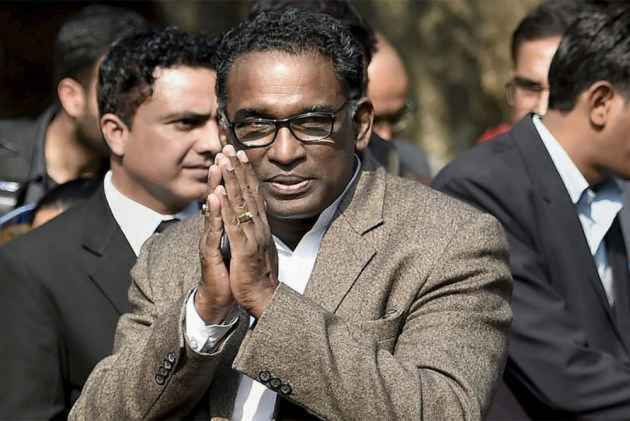 Senior most judge of the Supreme Court Justice Chelameswar refused to take up former law minister Shanti Bhushan's plea for framing norms on allocating cases to various benches today, saying “the reasons are too obvious”.

"I would not like to deal with Shanti Bhushan's plea, reasons for it are too obvious," the SC judge said.

Senior advocate and former law minister Shanti Bhushan had recently filed a PIL seeking clarification on the administrative authority of the CJI as the 'master of roster' and laying down of principles in preparing the roster for allocation of cases to different benches.

"Someone running a relentless tirade against me that I am up to grab something. This country will follow its own course but I'm sorry and I can't deal with this PIL," said Justice Chelameswar who is “going to retire in a few days”.

The judge's remarks came as advocate Prashant Bhushan told him that PIL by his father Shanti Bhushan was not being listed. After Justice Chelameswar refused to list the case, Prashant Bhushan mentioned it before the CJI's court. "We will look into it," the CJI told Bhushan.

While refusing to deal with the plea, Chelameswar said he would not like 'another reversal of his order in 24 hours'. The reversal he was referring to was about Supreme Court overturning the order of a two-judge bench to set up a larger bench to hear a graft case allegedly involving judges.

The decision comes a day after a Supreme Court bench headed by the Chief Justice ruled that the CJI is the "first among equals" and occupies a unique position having the "exclusive prerogative" to allocate cases and set up benches to hear cases.

Commenting on the ruling which was delivered on a plea filed by Uttar Pradesh-based lawyer Ashok Pande, advocate Prashant Bhushan had questioned the way the matter was listed for hearing before a bench headed by the CJI.

He claimed that it was "a malafide attempt to pre-empt Shanti Bhushan's petition".

Bhushan said "suddenly another petition filed by Pande was resurrected and listed before the CJI involving this issue of master of roster. Here the CJI himself, who could not have heard the matter because in Shanti Bhushan's petition, he was a party and his own power was being questioned".