In December last year, the Mizo Chelsea Supporters’ Club (MCSC) members could collect Rs. 1,04,095 and 10 bags of rice, two vegetable bags and 50 bags of clothes for Thutak Nunpuitu, the biggest orphanage home in the state. England international and Chelsea midfielder Ross Barkley had also sent a video message for this charity. 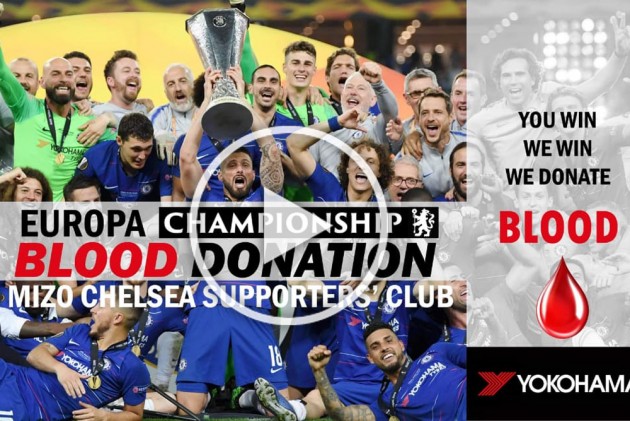 For Jonathan Lalremruata, it’s an exciting moment to be able to donate blood in Mizoram’s capital Aizawl on Saturday. The occasion is something different – for Chelsea’s UEFA Europa Cup league victory just a couple of days back in Baku, Azerbaijan.

He is a member of a hardcore Chelsea fan named Mizo Chelsea Supporters’ Club (MCSC) and they have been doing the similar kind of charity drive whenever their favourite club has won any major title since 2011.

“It’s a great moment for us to be organizing this event. We [are] happy that Chelsea has won and we are celebrating the victory in this way. Let’s hope more victories for Chelsea,” Jonathan, also happens to be the honorary secretary of MCSC, told Outlook.

Their motto is charity in the name of Chelsea. In December last year the MCSC members could collect Rs. 1,04,095 and 10 bags of rice, two vegetable bags and 50 bags of clothes for Thutak Nunpuitu, the biggest orphanage home in the state. England international and Chelsea midfielder Ross Barkley had also sent a video message for this charity.

True-blue @ChelseaFC fans of #Mizoram #India donate blood to mark the club's victory in the #EuropaLeagueFinal2019.

“We are grateful that Chelsea club has also helped us for this event. They have posted about this on their Facebook page. Yokohama, the main sponsor of Chelsea, has also provided us merchandise to give away for the event. Last year, we were also covered by Chelsea magazine,” Jonathan added.

“They are also supporting us for the cause. Lallianzuala has already donated his India jersey to give away to the lucky donor. This has really helped to get the publicity,” said Jonathan said.

In November, the Club also helped Mizo fans meet Didier Drogba, one of the game’s greats and a Chelsea legend, when he visited Delhi.

“It was a dream come true to meet the legend. During the meeting I also had a question for him. I presented him a traditional hat, a traditional bag and our club shirt. It was definitely a memorable moment for me and also for the other members of our club” Jonathan said.

Mizoram is one of the states in the country where football is a religion. Aizawl FC, their only team to play in the I-league had won the title in 2017, on their maiden appearance in the oldest existing league of the country.

“I think this story will go well with the fact that Mizoram is the Indian football powerhouse with most Mizo players in the ISL and I League amongst all Indian states and the craze for football in the state,” he said.