So, has Amma been overconfident in shedding her allies? Counting day will tell. There are already rumblings over candidate selection in which Sasikala Natarajan is believed to have had a hand

In Kannada there’s a proverb that means “you love rice, but you also love your guests (Akki mel aase, nenter mel preeti) ” — in other words, Hobson’s choice. Which is what DMDK chief Vijaykanth was faced with recently. After having joined forces with Jayalalitha’s AIADMK and winning 29 seats in the assembly elections, to delink and go solo would be seen as an insult by Jayalalitha in view of their prickly relationship, but he felt that the party he had founded in 2005 — and which did so well on its own in the 2006 Assembly (8.33 per cent votes) and 2009 Parliament (over 10 per cent of the votes) — deserved to test its strength, particularly after the AIADMK supremo was cold to the idea of seat- sharing and went ahead and announced her candidates.

But with typical panache the actor-cum-politician, who was the first off the block to start an election campaign for the local body elections scheduled for October 17 and 19, is walking the tightrope. Therefore, he has decided not to field a DMDK candidate at Tiruchy (West) where a by-election to the assembly segment is scheduled for October 13 in which the AIADMK is virtually in a straight contest with the DMK, but will fight the local body polls after forging a “third front” with the left.

Even during the run-up to the assembly elections in April, there were rumours that the Congress was trying to rope him into forming a third front but it did not materialize. There was even talk that the DMK was trying to prop him up to stand solo so he could muddy the waters and play spoiler for the AIADMK. That did not happen too and instead the DMDK went with the AIADMK and became part of a coalition that included the left.

“For the first time, a third front has emerged in TN. This is a good thing and we request the people to support it,” said Vijayakanth, taking a clear stand unlike the CPI, which opportunistically, said, “This is not a new alliance. This understanding is for the local body elections.” State secretary D Pandian baulked at calling Jayalalitha “authoritarian” or “high handed” although she unilaterally declared AIADMK candidates for all seats even while seat sharing talks were going on. “We tried our best because we don’t want to be remembered as just having given up,” was his wimpish statement after his party delegates went to Poes Garden to explain that they “had no other option” but to go with the DMDK. 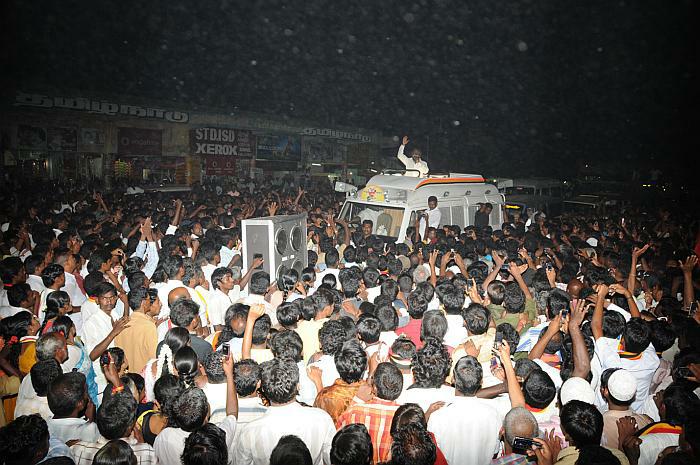 Vijayakant faced his first dilemma when he was addressing a public meeting in Chennai after kicking off his campaign. While there were no holds barred in his attack on Karunanidhi and the DMK, he is walking on eggshells when it comes to Jayalalitha. Even when asked earlier why he had chosen to anger Amma with his cryptic comment — when asked his opinion on her 100 days as CM, he had said he should be posed the question after six months — Vijayakanth was clever in his response, saying: Even former CM Kamaraj had said that a government should be given six months before being criticized.” Well played.

About the presumption that the ruling party usually wins the local body elections, he said, “There is no truth in that argument. If people decide, then they can change their (ruling party’s) fate.”

But his wife, Premalatha took off the gloves briefly commenting, “The only area in which TN had witnessed growth is the expanding number of retail liquor shops run by TASMAC. These shops are destroying innumerable families.” But both the DMK and AIADMK have been complicit in this.

It was déjà vu for those who had followed Vijayakanth’s campaign during the assembly election. His target was Karunanidhi and the DMK then. It’s a bit like flogging a dead horse but that’s what he is doing now. He was vicious saying, “I am trying to address issues without bringing caste into the discussion. But whenever he talks, even if nothing is wrong, he talks about a clash between Aryans and Dravidians. Then all of you will be fighting with each other.” He employed a Tamil proverb which was quite cruel to the former CM, saying, “When two goats clash, the jackal will sit by and the drink their blood. He (Karunanidhi) is that jackal and you are the goats.” Ouch!

Interestingly, however, the split in the AIADMK-DMDK means advantage DMK and that’s what has cheered the cadre which has been depressed since losing in the assembly election. Bad news kept flowing with the arrest of five ministers, two sitting MLAs and several leaders for grabbing land as the number of complaints to the special land grab cell exceeded 15,000. In addition, the sitting DMK MLA of Aravakurichi, K C Palanisamy was arrested and taken to Tiruchirapalli Central Prison by the Karur police last week, for his alleged involvement in illegal sand mining on the banks of Cauvery at Mayanur. Police said, Palaniswamy, a member of the DMK’s Property Protection Committee (police say he is worth Rs 1,000 crore), mined sand from 350 acres of the river bed and sold it for Rs 238 crores.

But despite all these arrests, for the first time in the last four months, the DMK cadre is upbeat. As a former minister put it, “The DMDK is likely to split at least 6 to 8 per cent votes and that means our chances of winning are brighter.” In fact, both of Karunanidhi’s sons, union minister M K Azhagiri, and former deputy CM Stalin who claim that they have been flooded with applications for different posts, have said that people “will teach a lesson” to Jayalalitha whose only focus is “revenge on DMK leaders not governance.”

So, has Amma been overconfident in shedding her allies? Counting day (October 21) will tell. There are already rumblings within her party over candidate selection in which Jayalalitha’s close friend Sasikala Natarajan is believed to have had a hand. “Many of the district secretaries are more loyal to Sasikala than Amma and have been picked,” grumbled a minister. Last Sunday, a member of the party, Sengamalai who joined the AIADMK in 1976, committed suicide because she was denied a ticket while in Trichy, the AIADMK’s deputy secretary of the women’s wing, P Uma, quit her post because she was overlooked and the party nominated M S R Jaya for the mayoral election. There have been agitations at the party offices and at Jayalalitha’s residence in Poes Garden.

It’s not only Vijayakanth and the left who are disillusioned, so is Viduthalai Chiruthaigal Katchi (VCK) chief Thol Thirumavalavan. When M Karunanidhi as CM sent MPs to Sri Lanka he is believed to have been crafty enough to include Thirumalavan (the MP from Chidambaram), who has built his political career on speaking up for Tamils (and, of course, Dalits) just like Vaiko of the MDMK. Crafty because Tamilians here were nauseated by MPs taking state patronage and in short, showing bonhomie with Sri Lankan president Mahinda Rajapakse, seen as the enemy of Tamils. So if Karunanidhi was going down as a party that let Tamils down, so would Thirumavalavan. Karunanidhi achieved that mostly but still, Thirumavalavan continued to be a sincere ally of the DMK.

Now, however, Thirumavalavan has figured out just how crafty Karunanidhi can be when the latter announced that the DMK would go on its own for the local body elections. While dropping the Congress as an ally was not a surprise — it’s no secret that Karunanidhi wanted to dump it for not helping him with daughter Kanimozhi’s continued incarceration at Tihar since May 20 over CBI charges that she was involved in the 2G scam — the message, when he said his party would face the local poll alone, actually was that he was also going to drop the VCK. The VCK, which had two MLAs in the last assembly, drew a blank when Jayalalitha’s juggernaut felled the DMK alliance in May this year.

Stung that his party had been left behind, he accused the Dravidian majors (who unilaterally released lists) of a “use and throw” policy after they “served their utility.” Now he has invited the PMK, MDMK, the Left parties and the Muslim outfits to come together to provide an alternative front. But the PMK has already announced that it will fight alone so his idea to bring parties wedded to the ideology of Tamil nationalism and Eelam has fallen through.