So was there a deal? Did he surrender? Or was it a highly-successful operation to nab a "dreaded gangster"? 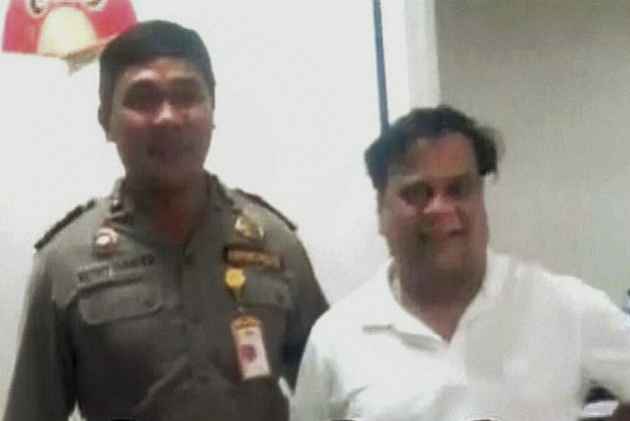 A dramatic escape in 2000 from a Bangkok hospital using mountain climbing gear, allegedly with the help of the Thai police, and then to safety via Cambodia. All these years Intelligence agencies have spun this exciting story about Chhota Rajan, the don who is now nearly in India's net.

Actually, Rajan may have escaped, but he was never at large.

Indian Intelligence agencies always had him on their radar, giving him shelter from Dawood Ibrahim and his men and going to the extent of even providing him safe houses. In fact, there are reports that at times he was even kept at "safe but at an undisclosed destination" in India as well and that the Bangkok hospital escape too was stage-managed.

He was tapped for information on the basis of which several operations against the D company were carried out. "But it now appears that no one is really interested in bringing him back," says a top intelligence officer.

In fact, Indian agencies have been long aware of Rajan being in Australia. Many can't explain how Rajan secured an Indian passport in Sydney in 2008. MHA officials say they are probing whether the passport was a forged one. The other unanswered questions are why Australia didn't arrest Rajan when he took off for Bali on a Garuda flight instead of tipping off authorities in Indonesia. "Australia did not want to become a hunting ground for gang wars and gangsters," say Intelligence officials, adding "they were more interested in pushing Rajan out of Australian soil."

In fact, Australian authorities tried to push Rajan out earlier this year as well when there was a fresh attempt on his life from Dawood henchman Chhota Shakeel's men. A fracas at a Bangkok restaurant between Rajan's men and Shakeel's men in September this year led to fresh attempts by Australia to push him out.

So was there a deal? Was it a surrender? Was it a highly successful operation to nab a "dreaded gangster"? "It was an accident. The fingerprints matched," explain MHA officials. Rajan had applied for resident permit and in the background checks that followed, Rajan's cover was blown, they say. What doesn't quite add up is that Rajan was caught last week. He applied for residency permit in May this year.

India was made to realise in no clear terms that Rajan was an Indian citizen and a "wanted" man and that he should be taken back. Indonesia is just a stop-gap arrangement. The fact that India's Extradition treaty with Indonesia hasn't been ratified will not come in the way. "We don't need to have a formal extradition treaty for somebody to be extradited to another country," Secretary (East) in MEA Anil Wadhwa said. He will be deported and handed over to Mumbai police. Incidentally, while the CBI has sent a team to Bali, Rajan is not wanted by the CBI.

Keeping him safe in India will be a challenge for the government. Rajan is viewed as a don who is sick, his clout is waning, his business empire dwindling and most importantly, he has lost the respect of his men especially after the attack on him in Bangkok in 2000. "Even his sources and informers have dried up. He does not have the wherewithal to start afresh," say IB officials.

That may be so but he still carries some clout. Earlier this month, four Mumbai policemen were sacked for being on the payrolls of Chhota Rajan henchman, Santosh Kalia. The police were not only facilitating Kalia (accused in the murder of journalist J Dey) in prison but also acting as messengers between Rajan and Kalia

But now that willy nilly he is in the net, it is time for some chest thumping from the Indian establishment.

Stories about yet another successful covert operation by National Security Advisor Ajit Doval were only matched with how the junior minister in the MEA V K Singh micromanaged the arrest, even flying down to Bali. These hot air balloons were punctured with some very public statements by none other than BJP MP and ex Home secretary R K Singh very publicly stating, "Catching Rajan is no big deal. He was a gangster alright but the bigger achievement would be to catch Dawood Ibrahim, dead or alive."

While India awaits its Osama Bin Laden moment, for the moment, the security agencies are interested in keeping Rajan alive.