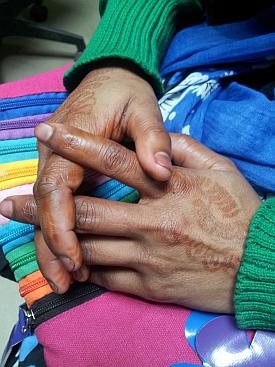 Such strong words and from a girl who is just 19 years old. At 15, Sahiba was sold by sex traffickers in Assam for Rs 13,000, and later bought by the family of a mentally-handicapped man in Haryana for Rs 70,000 to be his child bride. She was raped and beaten every night.
I looked to my colleague, Ritu. "I feel like crying," I said in English so Sahiba would not understand.

Sahiba's life story is so dark that it is almost as if she was wearing bright clothes to make up for the sadness in her life. Clad in a blue and white tie dye salwar kameez and a bright green sweater, she rested her hands on a rainbow-coloured bag. Quiet, child-like hands with intricate henna designs. I took a picture with my phone and showed it to her.

She smiled. Fleeting happiness on a face that has seen sadness for so long.

Sahiba's mother died giving birth to her. Ill-treated by her sister-in-law who took over the household, Sahiba decided to run away from home to eke out a living.

Sahiba was then 15. She asked a trusted neighbour where she could get a job, far away, where no one would know her. The neighbour introduced her to a woman who has brought girls to Delhi for "good jobs" and a stable life. It sounded attractive and would give her a steady income, much needed financial independence. She agreed to go with a young man assigned by this woman.
Along the journey, they were joined by an older man. When they reached Haryana, that man raped her. She was then locked up in a house, with her captors, joined by other men, keeping watch. "I could not resist. I could not shout. Who could have helped me?" she said repeatedly. "They were all in it together."

One day, while her captors were away, other people from the village started to come to the house, asking for her hand in marriage. She did not understand Hindi then but in her mind, she thought: better to be raped by one man than many.

So when her captors proposed that she get married, she agreed. But she was raped again by another captor. The next morning, in tears, angry and frustrated, Sahiba asked, "Why have you done this?" He told her, "You will get married and have a good life. I want something back from you in return."

Sahiba thought there would be marriage proceedings and a ceremony. There were none. She moved into Ibrahim's home. "I would not let him touch me. He was crazy," she said, pointing at her head. But she would get beaten up, as punishment. And the more she cried, the more Ibrahim would beat her.

Sahiba's eyes became moist at the memory. She paused, a faraway look in her eyes. Then she seemed to gather herself together, and continued with her story. One day, she overheard a woman villager asking a household member, "How much did you pay for her?" And then it all clicked: she had not been married, she had been bought!

Sahiba was outraged. She made a plan to escape. Sahiba had managed to keep her SIM card; Ibrahim's family had confiscated her phone. But the page on which she had written down her brother's name in Assam had been torn out by Ibrahim. It was a race against time. At a family's wedding in a neighbouring city, Sahiba was finally able to get hold of Ibrahim's sister-in-law's phone. Using her SIM card, she called her brother, pleading for help. She told him where she was.

Together with his aunt, Sahiba's brother immediately went to the police in Assam to file a report but the police officer refused to register an FIR. In despair, he turned to the Bachpan Bachao Andolan. After some investigations and with the help of the police, Sahiba was finally rescued. She now works as a maid in a city.

It has been some two hours since Sahiba started telling her story. Her face was drawn and she looked sad but she didn't seem quite done yet. But she has to go. Her employer is waiting.

I held her hand. We will keep in touch, I said. She nodded, crinkling her eyes at me. We hugged.
And then she was gone.

(*names have been changed to protect Sahiba's identity)

Eirliani volunteers at Bachpan Bachao Andolan and is Visiting Fellow at the Observer Research Foundation. She can be reached at eirliani[AT]bba[DOT]org[DOT]in