Children In J&K Living In Most Militarised Zone Of The World, 318 Killed In Last 15 Years, Says Human Rights Group Report

“Children in Jammu and Kashmir are living in the most militarized zone of the world, with the presence of 7,00,000 troopers, which exposes them to the risk of all grave six violations against children as laid out in United Nations Convention on the Rights of the Child." 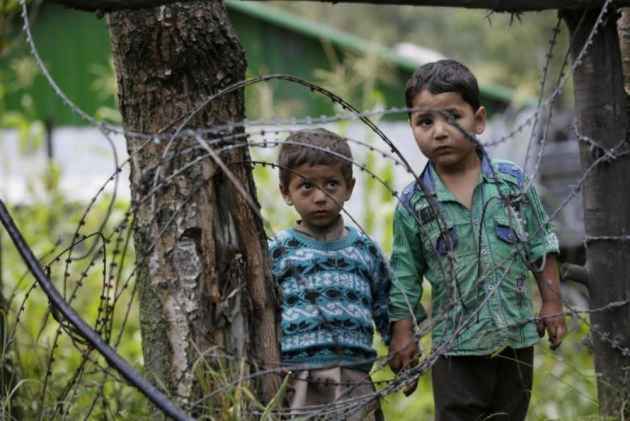 The Jammu Kashmir Coalition of Civil Society (JKCCS), a human rights organisation, in its report on the impact of violence on the children of Jammu and Kashmir said 318 children have been killed in the valley in the past fifteen years.

The report titled Terrorized: Impact of Violence on the Children of Jammu and Kashmir (2018) examines the situation of children in the ongoing conflict in Jammu and Kashmir during  years-2003 to 2017- and gives data on killings, arrests, mass violence, sexual violence perpetrated against children.

“Children in Jammu and Kashmir are living in the most militarized zone of the world, with the presence of 7,00,000 troopers, which exposes them to the risk of all grave six violations against children as laid out in United Nations Convention on the Rights of the Child,” the report reads.

According to the report, "the killing of 318 children constitutes 6.95% of the civilian killings in last fifteen years, as 4571 civilians have been killed in Jammu and Kashmir in the same period (2003 – 2017).”

“In the same period at least 16,436 killings were recorded in Jammu and Kashmir, and the majority of them included alleged militants numbering at least 8537 killings. The numbers indicate that in the last fifteen years Jammu and Kashmir in an average year has witnessed at least 1,095 killings, which belies the government’s claims of ‘return to normalcy’,” the report says.

It says the pattern of killings of children in the fifteen-year period suggests that children were direct targets of state violence, as part of its stated offensive to curb uprising and militancy.

“At least 144 children were killed by Indian armed forces and state police in Jammu and Kashmir, which alone accounts for nearly half, i.e. 44.02 percent, of the total children killed. Most of the children, at least 110 of them, killed in state violence were shot dead in different incidents of violence, and not less than 8 children died due to injuries inflicted from pellet shot-guns fired by government forces,” the report says.

Twenty-seven children died due to drowning either caused due to the negligence of armed forces in Wular lake tragedy or being chased by government forces during a protest, where victims find no way of escape from the armed forces and forced to jump into water bodies, resulting in their death,” the report says.

The report says there are no legal and normative processes or practices protecting children’s rights in Jammu and Kashmir as hundreds of minors have been booked “under the repressive Public Safety Act (PSA), with total disregard to the fact of their being children.”

About the early 1990 when armed insurgency erupted in the State, the report alleges with the advent of armed insurgency in 1989 and “the Indian state’s brutal counter-insurgency campaign against it, the civilians unsurprisingly became the first victims of the state violence.”

“In the initial years of the decade of the nineties, the crackdown against civilians was widespread and systematic as incidents of mass violence in the form of massacres took place at regular intervals,” the report says. It says in 1990 alone, at least 12 incidents of mass violence were perpetrated against civilians by the armed forces in various parts of the valley resulting in the killing of at least 421 civilians including children.

It quotes a 2012 study by United Kingdom-based charity Save the Children that found Kashmir valley has 215,000 orphans ‘out of which 37% have lost one or both parents to the prevailing conflict’. “The consequences of orphan-hood had a direct impact on children’s physical and psychological health and it directly impeded their access to education and health-care. The children brought up in orphanages and without parental support have resulted in multidimensional social challenges,” the report reads.

The report says one of the direct impacts of “large-scale militarization in the State has been on the education of children as hundreds of schools and educational institutions were converted into “military camps and outposts since the early nineties.”

“The occupation of schools and educational establishments by armed forces creates a situation of insecurity and fear among students. In the last three decades many incidents of harassment, sexual violence or beating of school-going children near the school premises have been reported, resulting in protests by the student community; the most recent being the April 2017 widespread student protests that rocked Kashmir valley. The increased militarization of schools also leads to alarming drop out rate of students,” the report says, adding that owing to the public condemnation, the forces have vacated many school buildings and the number of schools and educational institutions occupied by the forces is fewer in number now. “But the entrenched nature of landscape of militarization ensures that military outposts and camps are located in close proximity of educational institutions or on the way,” the report says.