China's interests in Pakistan now transcend the India factor. The implications for India are profound. 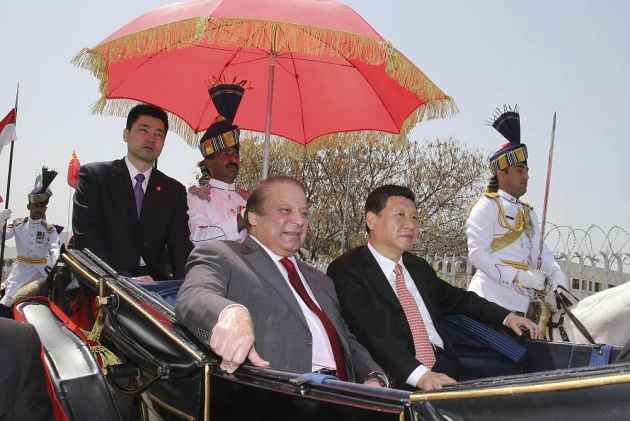 On the eve of his visit, Xi Jinping recited an Urdu couplet in an article: "My friend's lovely image dwells in the mirror of my heart; I tilt my head slightly, and here it comes into my sight." For decades, such hyperbole has substituted for a meaningful China-Pakistan relationship. But Xi's visit marks a turning point. Since 2001, China has played second fiddle to Pakistan's primary benefactor — America. Keeping their head down as Deng Xiaoping instructed, Chinese policymakers steered clear of assuming any burden in the US-led mission in Afghanistan and its concomitant policy in Pakistan. Over a decade later, Afghanistan and Pakistan are in deep turmoil, and, Deng's dictum has given way to a stronger and extroverted China. Xi's China, however, has not evolved into a great power in the classical European sense seeking adventure and expansionism everywhere. The Chinese define their interests carefully and pursue them with resilience but with flexible means and via complex statecraft. Is China changing the way it defines its interests in Pakistan?

The original glue for a China-Pakistan entente — a shared hostility towards India — has not disappeared from Beijing's calculus. Pakistan was the largest recipient of Chinese arms in the past decade. In the last five years, according to SIPRI, 70 percent of China's arms exports went to three countries: Pakistan, Bangladesh and Myanmar. Yet, China's South Asia and Pakistan policy is evolving into a more sophisticated one. China's interests in Pakistan now transcend the India factor. The goal can be described as an attempt to shape a new regional order based on interdependence with China's still robust political economy and integration into new institutional networks focusing on different facets of regional security and economics. The core of Xi's Pakistan play is about buttressing Pakistan's state and developmental capacity, which is linked to China's energy security and counter-terrorism interests.

It is well established that Uighur-based extremism in Xinjiang, a minority border province, traces its roots to Pakistan's tribal areas via the East Turkestan Islamic Movement. A spurt of terror incidents across China in recent years has made Beijing more anxious about neutralising this threat. Xi explicitly pointed out Pakistan's importance in the "security and stability of China's western border areas" during his speech in Pakistan's parliament. A weak state with a dilapidated infrastructure has exacerbated Pakistan's efforts to weed out extremists targeting even its quasi-ally. It is this reality that has persuaded Chinese policymakers to seriously plan about Pakistan's future.

While there is no overt evidence of Beijing seeking to cultivate a new civil-military balance or assist in Pakistan's fragile democratic process, Chinese scholars have expressed a more active interest in Pakistan's internal affairs. In conversations with Chinese scholars I have discerned a bolder outlook and a confidence that China's industrial and financial strength can be leveraged to assist in Pakistan's domestic transformation. But it is also evident that China's prism for analysing Pakistan's domestic problems is essentially a materialist one. That is rather than viewing Pakistan's structural contradictions as a national identity problem, it is viewed primarily through a materialist lens — a weak state as the primary cause of instability and radicalism. It is unclear if throwing money at something, which at its roots is ideological, can alter Pakistan's body politic. But Beijing doesn't seem to be too perturbed. As one scholar tells me, "China-Pakistan economic cooperation will help make Pakistan a normal country, which is also good for India."

At first glance, the intent appears similar to the US discourse during its Afghan intervention phase (recall the Af-Pak strategy) where Pakistan's long-term prospects were deemed as crucial to stabilise Afghanistan and the region. American actions on the ground, however, never seemed to go beyond mollifying the Generals in Rawalpindi. China seems to be thinking differently. The planned development projects and the envisaged scale of China's investment in Pakistan's infrastructure sectors are of a much higher magnitude. The energy sector is projected to receive the largest share — 75% or $34 billion — of the projected $45 billion of direct investment and financial loans. Accounting for over 16,000 MW, diverse renewable and conventional power projects will double Pakistan's installed capacity. That Pakistan's energy crisis is a big political issue was probably not far from Chinese policymakers' minds when they designed the overall investment package.

The second big theme is regional connectivity. In 2013, Xi articulated the idea of reviving the old silk routes. When developed, these lines of communication will traverse across the Eurasian continent — transiting Russia, Central Asia, Iran, Southern Asia, and, maritime Asia around the Western Pacific and northern Indian Ocean littorals. Pakistan has become the first harvest of this ambitious idea of reconnecting disparate economies with each other but more importantly with China's eastern heartland.

Twenty percent or $9.5 billion of the projected $45 billion investment will be in Pakistan's road and rail sectors. The trans-Karakoram highway is envisaged to expand and connect to a robust road and rail network connected to Pakistan's coastal outlet of Gwadar (for which $622 million has been earmarked for a variety of infrastructure and human capital development projects). But a functioning and secure corridor that serves as a two-way geoeconomic link between eastern China and West Asia and Africa is conditional on several intermediate pieces of the puzzle coming together. The central assumption, ofcourse, is that Pakistan's rulers possess the vision and resolve to transform their country. Nevertheless, China has now made a large down payment to assist Pakistan in reaching a modicum of internal stability.

The implications for India are profound regardless of how prolonged is the operationalization of China's big push in Pakistan. For India, it appears that history is one recurring loop of Pakistan's continuing importance for its two major benefactors — US and China. Can India exploit the growing Sino-American rivalry when it comes to this region? It is difficult to foresee American and Chinese policymakers competing actively over Pakistan. In the final analysis, an unchanged Sino-American convergence of supporting Pakistan as a functioning state and underwriting its territorial integrity will override all other secondary geopolitical contradictions. For its part, Pakistan's foreign policy is unlikely to disrupt this broad area of agreement by overplaying its hand and losing the strategic privilege of having two formidable benefactors.

What India can do is formulate a sophisticated regional policy. Instead of a crude strategy of hoping to counteract Beijing's every move in the region, Delhi can craft a framework where competitive and cooperative elements are bound together in a more holistic strategy, and, one that is more consistent with actual Indian capacities. For example, restoring a modicum of civilian legitimacy and state capacity in Pakistan might not necessarily be antithetical to long-term Indian interests. Even if they cannot coordinate policies, both India and China have a common interest in converting Pakistan from a frontline ‘hired gun' into a normal state at peace with itself and the region.

Further, Delhi through its own actions can shape the contours of China's gamble in Pakistan. According to one Chinese scholar, the trans-Karakoram Economic Corridor from Kashgar to Gwadar is "actually more of a energy strategy than an economic or investment strategy", aimed at overcoming China's "Malacca Dilemma". Can India reassure China on some of its legitimate SLOCs interests in the Indian Ocean? Although the pure economics favour a maritime silk route, China's perceived Malacca concerns and the ambivalence from India have led it to accelerate continental options to mitigate this dilemma. The Pakistani corridor is not worth the candle but one that China is probably being compelled to pursue. Having an expanding Pakistan navy securing China's maritime interests is real possibility if India does not formulate a more sensible strategy to accommodate China's SLOCs interests. By cultivating an image of a reliable Indian Ocean power, India can seek to reassure China's maritime concerns.

Modi's upcoming China visit will provide another opportunity to craft a more holistic and balanced China policy with a closer eye on South Asia.

The writer is research scholar at King's College London and author of India China Relations: The Border Issue and Beyond (2009)