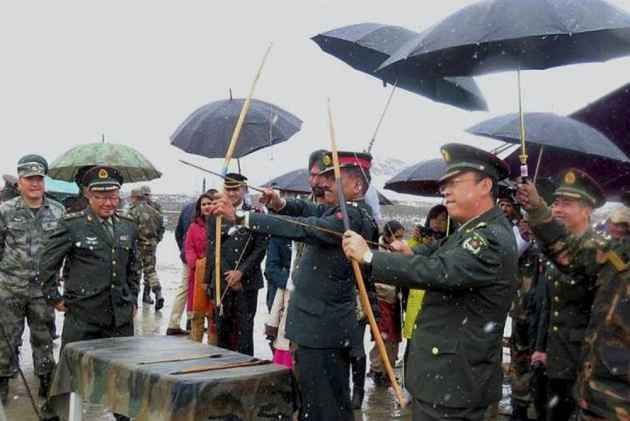 China today lodged a protest with India over the alleged "crossing of boundary" by its troops in the Sikkim section and demanded their immediate withdrawal, as Beijing warned that future visits of Indian pilgrims to Kailash Mansarovar will depend on the resolution of the standoff.

"Our position to uphold our territorial sovereignty is unwavering. We hope the Indian side can work with China in the same direction and immediately withdraw the personnel who have overstepped and trespassed into Chinese border," Chinese Foreign Ministry spokesman Lu Kang told a media briefing here.

"We have lodged solemn representations in Beijing and New Delhi to elaborate on our solemn position," he said.

About the fate of the pilgrims headed to Kailash and Mansarovar, who had returned to Gangtok after denial of permission by China to enter Tibet, Lu said their visit was called off because of security reasons.

He also linked future visits of pilgrims to India "withdrawing the troops" from the area.

"As to Indian pilgrims' journey through Nathu La pass at Sikkim section, I think the Indian side is very clear about this. For a long time Chinese government has made enormous efforts to provide the necessary convenience to those Indian pilgrims," Lu said.

"But recently the Indian border personnel trespassed Chinese border to obstruct our construction, we have taken necessary actions. Out of security consideration we have to put off the pilgrimage by the Indian pilgrims through the Chinese pass," he said.

"On the upcoming actions, we have to depend on what the Indian side will do. They have to take action to improve the security situation," Lu said.

Chinese Foreign Ministry spokesperson Geng Shuang last night said, "China urges India to immediately withdraw its border guards that have crossed the boundary and have a thorough investigation of this matter."

"The Indian border guards crossed the boundary in the Sikkim section of the China-India border and entered the territory of China, and obstructed normal activities of Chinese frontier forces in the Donglang area recently, and the Chinese side has taken counter-measures," he said in a statement.

His statement came after the Chinese Defence Ministry accused the Indian troops of objecting to building a road in what it claimed to be Chinese territory.

The dispute over construction of a road was apparently the reason why China stopped a batch of 47 Indian pilgrims from crossing through Nathu La border in Sikkim into Tibet to visit Kailash Mansarovar.

Chinese defence ministry spokesman Ren Guoqiang said yesterday that recently China has begun the construction of a road in Donglang region, but was stopped by Indian troops crossing the Line of Actual Control (LAC).

In his statement, Geng said that the Sikkim section of the China-India boundary has been defined by treaties, noting that the Indian government has repeatedly confirmed in writing that there is no objection to it.

In view of the above event, for safety reasons, China has to put off arranging for the Indian pilgrims to enter China through the Nathu La pass, Geng said, adding that China has informed India of its decision through diplomatic channels.

The Nathu La Pass sits 4,545 metres above the sea level and is wedged between Yadong County in Xigaze Prefecture, Tibet Autonomous Region, and Sikkim.

Yesterday, Geng had also said that the foreign ministries of both the countries were in talks over this issue.

The Nathu La route, which is the second route for the Kailash yatra, was launched with fanfare by the two countries in 2015.

Till 2015, the yatra (journey) was being organised by External Affairs Ministry only through the Lipu Pass in Himalays connecting the Kumaon region of Uttarakhand with the old trading town of Taklakot in Tibet.

The route through Nathu La reduced the hardship and journey time enabling many more pilgrims, in particular aged pilgrims, to undertake the yatra.

Geng's statement comes after tension mounted in a remote area of Sikkim following a scuffle between the personnel of the Indian Army and the PLA, leading to Chinese troops damaging bunkers on the Indian side of the border.

The incident happened in the first week of June near the Lalten post in the Doka La general area in Sikkim after a face-off between the two forces, which triggered tension along the Sino-Indian frontier.

After the scuffle, the PLA entered Indian territory and damaged two make-shift bunkers of the Army.

Following, the India-China war of 1962, the area has been under the Indian Army and the ITBP, which is the border guarding force and has a camp 15 km from the international border.