That's how an American TV channel described China's glamorous first lady, but her past record as a PLA officer in and during the Tiananmen Square protests awaits scrutiny. 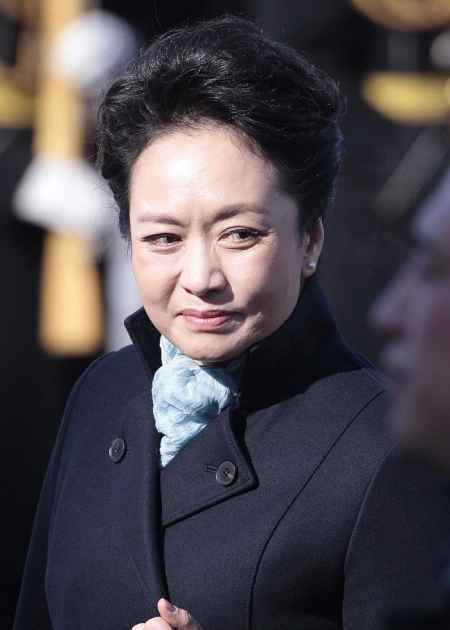 “China’s new soft power”, “A Media Sensation” — these were some of the expressions used by the Chinese media in their reports on Peng Liyuan, the second wife of President Xi Jinping, who accompanied him on his just-concluded first State visit to Russia, Tanzania, South Africa and Congo.

The correspondent of the Channelnews Asia reported:

“China's glamorous first lady Peng Liyuan has become a media and internet sensation. Some say she could also signal a new era of change in Chinese politics. The world took notice when Madam Peng made her debut as China's first lady, during President Xi Jinping's first visit overseas as head of state. Already a household name in the world of Chinese military folk music, the 51-year-old soprano is used to being in the limelight. And now, she's getting more attention than her predecessors - both at home and abroad.”

“Analysts say Mrs Xi's celebrity background played a part in raising her profile as China's first lady. Prof Li Weijian, Director of Foreign Policy Studies at the Shanghai Institute for International Studies, said: "She was previously in the limelight for being a singer. She's now in the limelight for being a politician's wife. That kind of public attention she previously received has been brought over and people want to see how she's like as a leader's wife." Prof Li added:

"Everyone's interested in her and her image and charm makes it easier for people to get close to her and in turn understand China as well. She's also an artist and she has an affinity to communicate with others unlike someone who's never been a public figure and has no experience in communicating."

"Other commentators say Mrs Xi, who's also a global ambassador in the fight against HIV/AIDS, signals the beginning of a new political scene in China, as her transition from popular singer to now, first lady makes people feel more connected to the Chinese leaders, whose lives have always been kept away from the public eye.”

“If you were looking to cast someone to carry on Jacqueline Kennedy's charm offensive, it would be hard to find anyone more suitable than Peng Liyuan, wife of Chinese President Xi Jinping. If you were writing a novel and trying to craft the perfect blend of personal history, capabilities, poise and charm for a character, you'd come up with someone like Peng.

“Born into a humble family in Shandong province, she joined the People's Liberation Army at the age of 18, gaining nationwide fame as a performer of patriotic and military songs. But she is not only praised for her voice and professional achievements, she has also gained plaudits for her charity efforts and volunteerism. She has, among other things, distinguished herself as a World Health Organization ambassador in the fight against AIDS, and was a comforting presence in the aftermath of the 2008 Sichuan earthquake.

”I've had the great joy of attending one of the super-talented Peng's performances in the Golden Hall, the Musikverein, in Vienna and, like the rest of the audience there, was enchanted and mesmerized by her.

”Try as it may, it's no secret that China, even with its unparalleled rich and venerable culture, has not done a good job when it comes to its attempts to exercise the soft power that befits a country of its stature. Let's face it, the United States is doing a much better job in this respect, it has dominated this field in virtually every aspect for the last hundred years and perfected the projection of soft power beyond its shores as both an art and a science.

”The media attention given Peng as she accompanies her husband on his first foreign trip as president shows that not only can she serve as a role model for Chinese women, especially young Chinese women at home and abroad, she can also be an effective icon for projecting China's soft power overseas.

”For decades at least, China has not had a tradition of first ladies like in the US. Now that China has mounted to a higher position on the world stage, it can project its first first lady!And Peng Liyuan is the perfect person with whom to begin.”

This is not the first time the wife of a Chinese leader has accompanied her husband on his foreign visits. The wife of Hu Jintao, the predecessor of Xi, had accompanied him on some occasions. But unlike the wives of the previous leaders, Peng is glamorous and the Chinese media focused on her glamour to showcase her as the image of the new Chinese woman—glamorous and politically and socially active, who can hold her own against the First Ladies of Western Countries—particularly the US.

An American TV channel described her as China’s Michelle Obama. And the Chinese were happy with that description.

Everything she wore and did during the travel became news. She always made it a point to wear Chinese, avoiding expensive Western brands. The focus was on the fact that whatever she wore was a product of the Chinese fashion industry. She sought to show that a Chinese woman can be chic even while adhering to her husband’s exhortation to the Chinese people to be austere in their life-style.

Interestingly, even though Xi took over as the General Secretary of the Communist Party of China in November last year, she avoided the limelight till he was elected as the State President by the National People’s Congress (NPC) in March.

Is there a possibility of a personality and glamour cult building around her as a result of the adulation to which she is subjected and is there a danger of this cult being viewed adversely by the old generation party members? This is a question which will engage the attention of the Chinese analysts in the months to come.

After Xi returned to China from his foreign visit, the spotlight on her was dimmed, thereby indicating that she will be projected as a showcase of emerging China to the outside world, without giving her any domestic role as the wife of the party leader.

She was a sensation among China’s growing community of netizens. While many of the online references to her were positive, some brought out clips to show that she had sung and danced for PLA troops in Tibet and for the troops which had crushed the pro-democracy students in the Tiananmen Square. Official censors had them blacked out quickly.

This shows a danger that while the government and the party want to focus on the glamorous and positive side of her image, as a PLA officer, she also has a negative side and skeletons. The detractors of the party will try to dig out the negative side and expose it to the people.