The protesters asked the Chinese President to stop laying claim on the geographical area of Arunachal Pradesh. 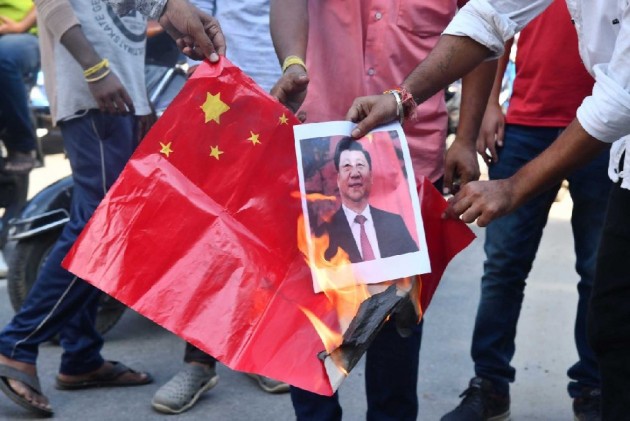 A red carpet welcome was accorded to Xi as folk dancers welcomed him with cultural performances at the airport.

However, in Guwahati, protesters raised anti-China slogans and burnt Chinese flags and portraits of the Chinese President. Members of All Asom Hindu Suraksha Sena (AAHSS) slammed China for its alleged nexus with Pakistan and Bangladesh against the interest of India.

Also Read: Not For Other Countries To Comment': India's Reply to Xi-Khan's Discussion On Kashmir

The AAHSS also asked the Chinese President to stop laying claim on the geographical area of Arunachal Pradesh.

“We opposed the visit of the Chinese President. China has been supporting the causes of Pakistan -- a country which supports terror acts against India. Moreover, China is laying claim on Arunachal Pradesh,” said AAHSS president Pradip Kalita.

As a mark of protest, Kalita said, people in Assam should boycott the Chinese products.

PM Modi and Xi Jinping are scheduled to meet on Friday evening in Mallapuram, a coastal town 50 km away from Chennai, where PM Modi will host a dinner for the Chinese President. They will meet on Saturday morning for a one-on-one meeting nearly a year after they met in China's Wuhan.

China has always been known to have a soft corner for Pakistan. According to a statement released by Pakistan Prime Minister Imran Khan's office in Islamabad, the Pakistani leader thanked Xi Jinping and the Chinese government for their ‘support on the Kashmir issue’, and for China's financial support to Pakistan in difficult times.