Home  »  Website  »  Sports  » Reportage  »  'Chinese Goods Don't Last Too Long, Will Knock Him Out In 45 Seconds': Vijender Singh On His Next Bout

'Chinese Goods Don't Last Too Long, Will Knock Him Out In 45 Seconds': Vijender Singh On His Next Bout

Vijender will take on Zulpikar at the NSCI Stadium in Worli on August 5. 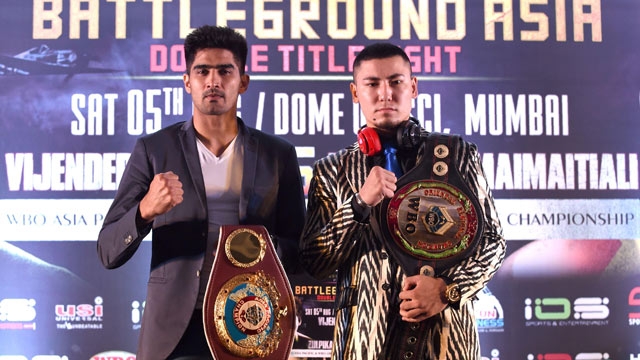 Indian boxing star Vijender Singh has claimed that he will knock out his Chinese opponent Zulpikar Maimaitiali in just 45 seconds they will take on each other on August 5 in Mumbai.
"45 second mein jald se jald niptaane ka try karoonga (I will try to wrap up the bout in 45 seconds). Chinese maal zyada tikta nahi (Chinese goods don't lasts too long)," Beijing Olympic bronze medallist Singh said on Monday.
Vijender, who is WBO Asia Pacific Middleweight Champion, will take on Zulpikar, the WBO Oriental Super Middleweight Champion, at the NSCI Stadium in Worli. The Beijing Olympics bronze medallist, has been training in Manchester, England, with his trainer Lee Beard for the bout.
Vijender, who is training in Manchester under Lee Beard, had overwhelmed Tanzania’s Francis Cheka in his title defence in December. He is undefeated in the circuit and the April 1 bout will be his third pro fight in the country, the earlier two being held in Delhi.
Vijender has, so far, eight wins with seven of them being knockouts.
In this fight, the two boxers will put their respective WBO titles at stake and whoever wins the bout will take home his defended title along with his opponent's too, it was announced.
Three other Indian pugilists Akhil Kumar, Jitender Kumar and Neeraj Gayat will be seen in the ring, taking on international opponents, whose names will be declared later, on the fight day and it will be 2006 Melbourne Commonwealth Games gold medalist Akhil's debut bout as a pro.
Apart from them, three other Indian boxers- Pardeep Kharera, Dharmender Grewal and Kuldeep Dhanda- will also take on international boxers, whose names will be announced on the fight day.
"I am all set for the August 5 bout. He (Zulpikar) is just a young kid, a southpaw. When he said that he will knock me out, I was laughing. We will show China that we are the best," the 31-year-old Vijender said earlier said.
Fight organisers, IOS Boxing Promotions, said they had initially planned the fight in March-April, but it did not happen.
Zulpikar expressed confidence of winning against the Indian boxing star, saying he will knock Vijender down.
He has eight bouts against his name, the same as Vijender.
Zulpikar has scored five knock-outs wins and has fought 24 rounds. His last bout was with African boxer Thomas Mashali after which he won his current title of WBO Oriental Super Middleweight Champion last year. He turned towards pro in April 2015.
Vijender, who has remained unbeaten since his debut in professional boxing in 2015, has fought eight bouts with the last one being against former world number 1 boxer Francis Cheka from Tanzania, whom he defended for his title.
Vijender clinched on to his first title, in July 2016, against Kerry Hope of Australia, becoming the WBO Asia Pacific Super Middleweight Champion.
Overall, Vijender has fought eight bouts with seven of them being won by knock-out. He has 30 rounds under his belt, eight more than his opponent from China.