'Chinese Let Their Nomads In And Then Occupy Territory': Leh Councillor Konchok Stazin 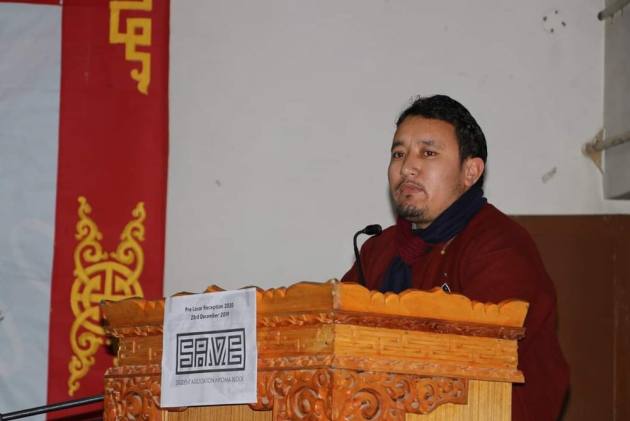 Konchok Stazin, a 33-year-old Independent candidate  from the border constituency of Chushul in Ladakh region,  says closure of the winter pastures in border areas of Ladakh would lead to animal mortality and make living in border villages difficult. In an interview with Outlook’s Naseer Ganai, he talks about the importance of opening grazing lands for locals, unprecedented Chinese intrusion and the need to turn border villages into smart villages with communication facilities. An outspoken Konchok Stazin was earlier with the BJP but was denied a ticket this time. He won elections from his constituency in October this year and is now a councillor in the Ladakh Autonomous Hill Development Council (LAHDC), Leh.

Q) Tell us about your constituency

Chushul constituency falls in eastern Ladakh bordering China. It is also known for the battle of Chushul fought in 1962 between India and China.  There are 12 villages in four panchayat halqas in Chushul constituency. The population is 2,500. Eight villages of Chushul fall close to the India-China border. It is strategically a significant area and it is just 200 km from Leh.

Q) You were previously with BJP. Why were you not given a ticket this time?

For the past five years, I worked very hard for my constituency and my party knows it very well and people also know it. That is the reason I won as an independent candidate from the constituency. I don’t know why I was not given the mandate. I have been highlighting border issues and intrusion as a responsible citizen of the country and if for this reason the party didn’t give me a ticket, then it is very unfortunate. But I really don’t know the reason.

Q) How are people feeling in the border villages?

Q) You have been highlighting border-related issues, what is the situation on borders?

I have tried my best to highlight situations along the border and problems of border villages and their issues in the past as well. I am a representative of my area and I have never shied away from highlighting the border issues. This kind of intrusion by Chinese hasn't taken place ever. Earlier intrusions from Chinese side would take place but I think the present one is unprecedented. They have intruded into a huge area in Finger 4. In the same way, there is an intrusion in the Changchmo area, which was the area of nomads. There are a number of areas in the Chushul region where they were not found earlier and had observation cameras but now their troops are there. This kind of situation I think has happened for the first time and it is unprecedented.

Q) What about communication facilities in border villages?

Whenever talks would take place between India and China, communication lines on border areas are snapped. For two months early this year, communication was snapped altogether. Already 2G Facilities available are insufficient. This summer, the region faced huge difficulty because of communication snapping.

Q) What about grazing areas?

Chinese first let their nomads graze areas and later occupy the areas demarcated by their nomads. This has been their practice. I think our nomads should be given the right to use our own grazing areas. In our case, our locals are not allowed to use pasture lands which are our own. Nomads should be encouraged and facilitated to take their flock for grazing in our areas. Demchok used to be a summer grazing area and now it is out of bounds for the past two years. Most of the people in the Changthang area are nomads and loss of the grazing area is a serious concern.

Remember during the Kargil war in 1999, it was the nomads that let the country know about the intrusion. Besides, whatever area nomads use for grazing their flock, enters into revenue records and these revenue records are advantageous to us in the border talks,  but only if you allow our villagers to use our grazing areas.

Q) In your view, what is the solution to the problems of border villages?

Whether in 1962 or at present, our villages have worked for the Army. This time also people worked as volunteers. Our border villagers are soldiers without uniform. The villagers are the second guardian force. I am of the opinion that apart from opening our own grazing areas, you need to make smart border villages. You need to provide 4G internet facilities instead of snapping whatever communication we get. Across the LAC in Demchok, Chinese have come up with smart border villages. They have 5G internet facilities available. You have to make the borders liveable. Border villages produce raw Pashmina which is then processed somewhere else. Villages don’t have communication facilities, the grazing land is also closed and Pashmina doesn’t get any viable economic benefit to us as long as it is processed somewhere else. This would lead to migration from border villages if they are not turned into smart villages.