BRICS - Brazil, Russia, India, China and South Africa - is a grouping of the five emerging economies. The BRICS summit brings together the leaders of these five countries. 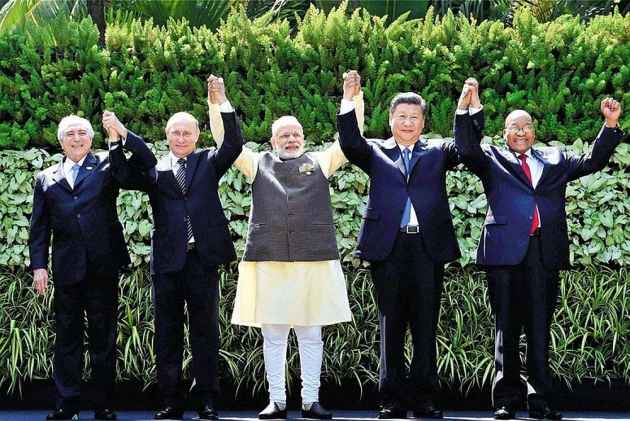 The opening ceremony of the three-day BRICS summit started with BRICS Business Council in this southeastern city in China's Fujian province amid a downpour triggered by typhoon Mawar which had caused widespread disruption to the summit preparations and the city's traffic. The typhoon also caused considerable disruption to the flights.

BRICS - Brazil, Russia, India, China and South Africa - is a grouping of the five emerging economies. The BRICS summit brings together the leaders of these five countries.

In his speech broadly focusing on enhancing cooperation between the BRICS members, Xi said, "construction of a tall building starts with foundation. We have laid the foundation and put in place the framework for BRICS cooperation."

Outlining BRICS cooperation in the last 10 years, he said treating each other as equals and seeking common ground while shelving differences is important part of cooperation.

"In terms of BRICS cooperation, decisions are made through consultation not by one country. We respect each other’s model of development, accommodate each other’s concern and work to enhance strategic communication and mutual trust," he told about 1000 delegates from different countries.

"Given difference in national conditions, history and cultures, it is only natural we may have some differences in pursuing our cooperation," he said.

"However with strong faith in cooperation and enhancing collaboration the BRICS countries can achieve steady progress in our cooperation," he added.

The summit comes days after India and China last week ended a 73-day standoff in Dokalam by withdrawing troops from the area. The two sides were locked in a face-off after Indian troops stopped the Chinese People's Liberation Army from building a road in the area. (PTI)