After Aung San Suu Kyi's significant victory, what next in the political process? Will she and her party be satisfied with playing the role of a constructive opposition till the next general elections in 2015? 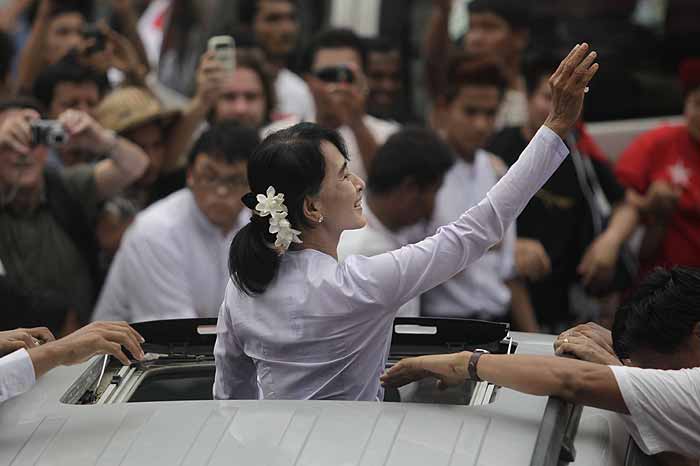 Aung San Suu Kyi's National League for Democracy (NLD) has won a landslide victory in bye-elections to the Parliament. It is reported to have won 43 of the 45 seats for which the bye-elections were held. It had contested 44 of them. Suu Kyi herself has comfortably won the seat for which she contested.

Suu Kyi, her party and international observers of the election campaign and the voting process have acknowledged the fairness of the elections. The fairness was even otherwise obvious in the number of seats won by the NLD which was up to its expectations.

The bye-elections were caused by the resignation of those elected in last November’s elections who were nominated to the Council of Ministers as was required under the Constitution. The NLD, which had boycotted last year’s elections, decided to register itself as a political party and contest the bye-elections to these seats after the Government decided to amend certain provisions of the Constitution and regulations regarding party registration to which the NLD had objected.

There was a certain lack of transparency regarding the talks or negotiations between Suu Kyi and President Thein Sein that preceded the agreement which facilitated the decision of the NLD to seek registration as a political party and contest the bye-elections. It was not clear whether it was an unconditional acceptance by the Government of the demands of Suu Kyi or whether there were concessions on both sides. If so, what were they?

Fears that the serving officers of the Army and other former Army strongmen like Than Shwe, who had ruled the country before last year’s elections, may force a reconsideration of the concessions made by Thein Sein have been belied so far. Serving officers and former Army strongmen have not come in the way of the implementation of the political reforms initiated by Thein Sein. The fact that they did not try to influence the results of the bye-polls to the detriment of the NLD is an indicator that they have accepted the reforms initiated so far.

The additional fact that China and Pakistan have taken the initiative for building up contacts with Suu Kyi and her party-- President Asif Ali Zardari had officially visited Myanmar and during his stay had met her-- was also an indicator that in the Chinese and Pakistani assessments there is no opposition to the reforms from the serving officers and former Army strongmen.

The Myanmar Army has always been worried over the possibility of internal political instability resulting in violence and a weakening of the Army’s counter-insurgency operations against the various insurgencies of the ethnic minorities. Whenever the serving officers have apprehended such threats they have not hesitated to intervene and strengthen their hold over the State and security apparatus.

In Suu Kyi’s post-victory statements advising her followers to observe restraint and moderation in celebrating the bye-poll victory, one could sense an anxiety to ensure that over-exuberance in celebrating the victory doesn’t lead to law and order situations that might be exploited by those unhappy with the reforms. She has been stressing the need for reconciliation and national unity.

Now that Suu Kyi and her party have won a significant victory, what next in the political process? Will she and her party be satisfied with playing the role of a constructive opposition till the next general elections in 2015 without prematurely trying to play a larger political role not warranted by their limited presence in the Parliament?

Will the Government try to co-opt her into the system by offering her an official role that she may find it difficult to resist such as the post of the Foreign Minister or Chairperson of an important Parliamentary Committee? If such an offer is made, will she accept it thereby running the risk of creating an impression that she has been softened by the regime and has let herself be co-opted or will she choose to maintain her political independence by not accepting any role under the present Government, which is still dominated by the Army? These are important questions to which answers are not available and will not be available for some weeks till the results are officially declared and the NLD members take their seats in the Parliament.

From a dogged and determined opponent of the Army and the military regime, Suu Kyi has mellowed down into a pragmatic leader who understands the Army’s determination to maintain a certain political role in the form of reservation of 25 per cent of the seats in the Parliament for the Armed Forces and to ensure that the various insurgencies do not lead to a disintegration of the country.

She also understands the geo-political and the geo-strategic considerations that make the Army follow a policy of equi-distance and equi-proximity in relation to China and India. While she has empathy for the West--which is reciprocated by the West-- she would most probably avoid any foreign and strategic policy initiatives or demands that could create alarm in China or among the large number of pro-Beijing officers in the Army.

There are indications that now that the bye-polls are over, our Prime Minister Dr Manmohan Singh has decided to visit Myanmar for two days next month. By then, a clearer indication of the vision of Suu Kyi should be available. Suu Kyi, who grew up in India and went to college in New Delhi, has been an admirer of Indian democracy and Indian political leaders of the independence struggle. At the same time, she has had reasons to be disappointed by India’s over-cautious attitude to the struggle for democracy led by her. It would be unrealistic to expect any overflow of bonhomie for India from her. She will be friendly and correct--nothing more.

In The Light Of Bodies Aflame