The Kathua rape and murder victim's father alleged in his complaint to the court that lawyer Deepika Singh Rajawat had attended only two or three hearings in the past five months. 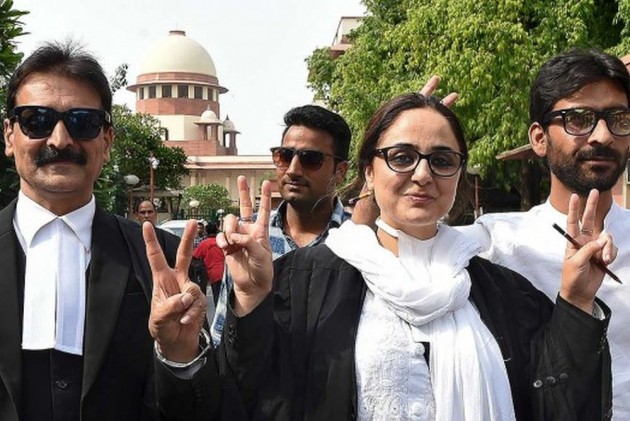 The rape and murder of an eight-year-old girl of the nomadic Bakarwal Muslim community in Kathua in January this year continues to set up new binaries with her father recently withdrawing the power of attorney to Deepika Singh Rajawat, a Jammu-based lawyer who stood up for the victim and earned global praise for her action.

Kathua, about 80km southeast of Jammu and close to the Punjab border, has been the nub of a storm after the girl’s body was discovered a week since she disappeared, a kilometre away from a village where the family was staying. The case reignited the religious and political divide between Hindu-majority Jammu and predominantly Islamic Kashmir in this restive northern state after eight men were arrested and put on trial. The suspects are Hindus and this was apparently a reason behind the fall of the coalition government of the BJP and the Peoples Democratic Party (PDP) this summer.

The Supreme Court transferred the case from J&K to the district sessions court Pathankot in May and fixed day-to-day hearings, which began in June. There have been about 120 hearings. Statements of 103 witnesses have been recorded so far, while 350 more witnesses are yet to record theirs. Amid the drive to speed up the trial, as the case has attracted widespread outrage for the support given to the accused by several Hindu groups, the girl’s father alleged in his complaint to the court that lawyer Rajawat had attended only two or three hearings in the past five months. Also, he said she claims that her life is in danger.

Rajawat has responded in a tweet that she was “there with them when no one was. Now since the rainy days have passed, they are winding up with me just because I could not regularly attend the trial which is taken care of by senior criminal lawyers. I don't blame them. It is the human tendency which travels in genes”. She also posted a video in her defence. The comment drew criticism with former chief minister Omar Abdullah saying, “You had me on your side until you slipped in the snide remark about the genes.”

Rajawat’s defence needs close scrutiny. She underscored the monetary strain of travelling about 150km to Pathankot, which is also affecting her work in Jammu. But since she admitted to have attended only a couple of hearings, she was not travelling that too often to affect her work in Jammu. The case was transferred to Pathankot in May based on an application by the girl’s father through counsel Indira Jaising. Rajawat was part of her team, so she was party to the demand for shifting the case.

Second, in an interview with a news portal, she alleged that family were misguided by the lawyers and there is a  conspiracy to dissociate her from the case as many people don't want her to take "credit".

Advocate Mubeen Farooqui, another counsel of the family, who is associated with the case since it was transferred to Pathankot, dismissed the allegation. "It was a conscious decision of the family when facts were told to them. They moved the application (to remove Rajawat’s power of attorney) before the judge. So how can we misguide anyone in the court?" Farooqui, a resident of Malerkotla, Punjab, which is 250km from Pathankot, said the facts, including travelling expenses and time, were known to them and “we accepted them”. “One should not feel offended if one is dropped by the client. It is part of the job," Farooqui said.

Third, Rajawat had said special public prosecutors Santokh Singh Basra and Jagdishwar Raj Chopra are doing a fine job and she is satisfied. “Both Basra and Chopra are actually handling the case and it is in safe hands. So, it was not necessary for me to travel regularly," she tweeted. Basara was appointed in May by the J&K government of then chief minister Mehbooba Mufti. In June, on J&K’s request, the Punjab government allowed its Pathankot district attorney Chopra to help Basra. Both are being assisted by Bhopinder Singh and Harminder Singh, chief prosecuting officers in the J&K police’s crime branch.

"Our aim is to get justice for the girl. It's a fact the primary job is of SPOs but our role is also to assist and coordinate different facts in the case. It's also an equally important job," Farooqui said.

Rajawat alleged that Farooqui didn't respond to her calls. Farooqui acknowledged receiving a call but couldn’t answer at the time because a court proceeding was on.

Fourth, Rajawat alleged a threat to her life, which was cited by the girl’s family as well. The top court had directed the J&K government in April to provide security to the family, their lawyers and their families. Rajawat was guarded by two personal security officers and they would shadow her to Pathankot as well. Since June, there has not been any statement threatening her. She had earlier alleged that Jammu bar council president B.S. Salathia had threatened her. Salathia rebuffed the allegation. "In August, while going home after attending the case, some miscreants attacked me and damaged my car. We all knew of the implicit danger involved in the case. We accepted the case despite knowing the dangers," Farooqui said.

Rajawat, along with Talib Hussain, an activist at the forefront of the movement for justice for the Kathua girl, was the first to highlight the brutal rape and murder. However, Hussain was arrested in Kupwara in August following a complaint from a student of Delhi's Jawaharlal Nehru University (JNU), who had invited Hussain to the campus for a seminar, that he had raped her. He is out on interim bail.