The Kanishka bombing case has not ended. It will end only when the guilty are brought to justice. Or it will end in other tragedies that will exploit the weaknesses of democracy in Canada and other parts of the world. The shock and disappointment of the Canadian Supreme Court's judgement in the Kanishka bombing case, and the acquittal of the two accused on all charges, will take time to sink in. What is already evident, however, is the abject incompetence and bias of the Canadian intelligence, policing and investigative systems in this case, and, in a broader context, the utter inability of democracies and particularly of the judicial system within democracies, to come to terms with the threat of terrorism and the necessity to evolve effective systems of defence against this global scourge. 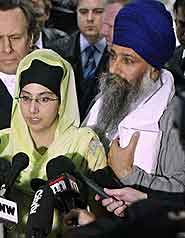 It is useful to recall some of the events and circumstances that led up to this disastrous judgment. Well before the bombing occurred, the Canadian Security Intelligence Service (CSIS) had penetrated the cell of conspirators, led by Talwinder Singh Parmar (who was eventually killed in an encounter with the Punjab Police in 1992), and had extensive records of their telephonic conversations running into as many as 244 tapes. The conspirators included Ripudaman Singh Malik and Ajaib Singh Bagri, who were acquitted in the present case, as well as another co-accused, Inderjit Singh Reyat, who had earlier been sentenced on a reduced charge of manslaughter after he cut a deal with the prosecution. Transcripts of these tapes - inadmissible as evidence - are still available, but the CSIS, inexplicably, erased all 244 tapes following what they claimed was "standard procedure" after the lapse of a specific period of time.

However, Norman Inkster, a former commissioner of the Royal Canadian Mounted Police (RCMP) is now on record as having stated that, "The destruction of the tapes should not have occurred. Someone should have recognised that they'd have value in an ongoing criminal investigation." Justice Ian Josephson of the Canadian Supreme Court, who delivered the judgment acquitting both the accused, called the destruction of evidence an "unacceptably negligent" act.

The CSIS had also followed the principal conspirators and documented their illegal acquisition and testing of explosives. But the "operation" was abruptly called off just days before the bombing. So shoddy has been the investigation in this case that the CSIS and RCMP have been unable to produce a single scrap of forensic evidence, and the prosecution eventually hinged on a handful of after-the-event testimonies whose credibility was easily undermined by the defence - and by outright intimidation. It is important to note that at least two of the prosecution's potential witnesses were murdered during the course of the trial itself.

Worse, the sequence of neglect, incompetence, and even implicit encouragement of Khalistani terrorist activities from Canadian soil through the 1980s and early 1990s was not unique to the Kanishka conspiracy case. Indeed, Indian intelligence and enforcement agencies had repeatedly provided hard evidence to Canadian intelligence and enforcement agencies on the activities of Sikh terrorists in Canada, but to no avail. It was, in fact, only after the 9/11 events in the US - so much closer to them, and where victims had far greater cultural and racial affinities to the Canadian people - that Canada woke up to the reality of terrorism.

But the "awakening" is still far from complete. Justice Josephson's ruling stated that, "Despite the horrific nature of the alleged crimes, there can be no lowering of the standard of proof from that required in any criminal trial." It is useful, in this context, to underline the fact that bringing terrorists to justice will require much more than such legal formalism, such a ritualistic commitment to procedures. I have written, earlier, in the Indian context, that it is now necessary to devise new laws, procedures and processes that help contain the menace of terrorism and protect the people from the depredations of a merciless and utterly unprincipled enemy.

Unfortunately, there is a new "high priesthood" that would have us believe that, as long as the tedious rites and rituals of the judicial yagna are fulfilled, all the interests of justice are served - no matter how many people are slaughtered in the streets. This is particularly the case where patterns of criminal action assume proportions that undermine the very fundamentals of the institutions of democracy and of civil society - as terrorism certainly does. It is high time the world recognises and understands the dangers and possibilities of a terrorised society, and the inadequacy of the conventional law - which approaches criminal conduct as an individual infraction violating individual rights - to deal with movements that collectively subvert and disrupt the structures of governance and enforcement themselves.

Considering the extended timeframes and global reach of terrorist movements today, and the new and ingenious ways such groups and their "fellow travellers" - including a wide sampling of "human rights organisations" - throw up, of bypassing and exploiting laws, the relentless attack on civilians and the widespread intimidation of the institutions and agencies of governance, it is clear that the obtuse legal formalism, the crude investigative, policing and prosecution mechanisms, which may have succeeded with conventional and individual crime, can only contribute to failure.

The justice system in its entirety will have to devise procedures and processes that remain in conformity with democratic norms, but are, nevertheless, strong and efficient enough to ensure that the people involved in terrorism, organised crime, and patterns of political violence that threaten the basic structures of society, are neutralised, and others who may be tempted to support or join them are sufficiently deterred. This is far from the case in any democracy in the world today.

For decades, the rich nations of the world have purchased a kind of immunity from terrorist actions, even as they tolerated and sometimes encouraged, terrorist movements in other and distant parts of the world - and Canada has certainly been prominent among these. Recent history has, however, repeatedly demonstrated that the chickens, eventually, come home to roost and that societies that have encouraged such movements "far away" - or offered their soil as a safe haven to actors in such apparently remote movements - have eventually become targets of terror themselves.

Democracies that fail to learn how to protect themselves and others against the global scourge of terror will perish. If terrorists - even those involved in as heinous a crime as the Kanishka bombing - are allowed to go scot free, terrorism secures a signal victory. A judicial system that feels that "justice" has been served because a judgement has ritually been pronounced in accordance with the evidence at hand is a short cut to collective suicide by the free world.

In such cases, justice can only be served when the guilty - whoever they may be, whether the present accused or others (at least one of whose identities have still been mysteriously kept secret by the Canadian authorities) - are brought to book. Canada must find the legal means to punish those who cold bloodedly murdered 329 innocent people at a stroke.

There have been several demands in Canada for a public inquiry into the intelligence and investigative debacles that culminated in the present acquittal. Such an inquiry is crucial, not only to expose the enormous incompetence, the biases and the institutional failures of the concerned authorities, as well as the cover-up that followed, but more importantly, to develop effective systems that will preclude the possibility of comparable failures in future.

The Kanishka bombing case has not ended. It will end only when the guilty are brought to justice.Or it will end in other tragedies that will exploit the weaknesses of democracy in Canada and other parts of the world.

K.P.S. Gill is Publisher, SAIR; President, Institute for Conflict Management. This article was first published in The Pioneer.