It's a curious place: a small editorial office within is home to an Urdu paper. A large open space is home to a monthly meeting of a group called Blue Rovers...

Take the turning off Minto Bridge and you come upon it, an old compound surrounded by a low wall and housing two—yes, two—graveyards. A lone mehendi bush stands at the heart of the larger graveyard, giving the place its name: Mehendiyan. It’s also the home of a sect known as Jamiya Rahamiya. Begun by a migrant from Persia in the 19th century, I’m told, the sect died out when its founder passed away leaving no descendants. The compound was then taken over by quite a different set of people, but it kept its name.

Then came Partition, and all the Muslims there fled. Shortly after Partition, it was reoccupied (‘kabza,’ as some of the residents will tell you) and its current inhabitants now claim a genealogy that is probably false, as the later occupants say. 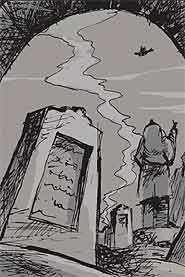 It’s a curious place: a small editorial office within is home to an Urdu paper. A large open space is home to a monthly meeting of a group called Blue Rovers, comprising Sikhs, Hindus, Christians and Muslims, with a fair sprinkling of politicians.

Loud speeches about secularism greet you on the first Sunday of every month, with now a stocky man wearing vibhuti and saffron robes, and now a tall, elegant maulvi.

In the shade of an old tree sits a healer wearing skullcap and dark glasses, his mobile number prominently on display. All sorts of people come to see him, "religion no bar" as he tells me.

Then, there’s Akbar, a tall Manipuri, long shoulder-length hair, dark glasses, shirt undone till the waist to display a hairless chest. Every evening around four or five young boys pour out of the madrasa within, their shalvar kameezes flapping in the breeze, all manner of embroidered, crocheted skullcaps on their heads. They walk along to the compound nearby where Akbar teaches them karate and other forms of martial arts, after which they play cricket. High above them, their fathers fly pigeons, small groups of them competing to entice the others away.

Mona, my hijra friend, who also lives there, and who has now become a name in Delhi, shows me around the graveyard inside. Fakhruddin Ali Ahmed was to come here, she says, but then they did not allow him to (leaving me wondering who ‘they’ were. Can she mean Rashtrapati Bhavan, I wonder). There are several empty spots in the graveyard. What are these, I ask her. "Advance booking," she tells me.

Once a year the compound fills up with goats. I watch them growing, tall and then plump, fed on local greenery and all manner of food. I know what they do not, come Id and they’ll be carcasses, their skins sold or given away to those who have a use for them.

There’s much going on inside, but Mehendiyan shuts down early and if you’re there after sunset on days when it does (festivals and weddings are exempt) you’ll wonder where you are. The twilit peace of the large tree, the occasional light blinking overhead, the smell of wood smoke on winter evenings, and occasionally a glass of Scotch whisky in my hand—that is how my friend Mona and I spend many a winter evening in Mehendiyan.