Hardik, now 25, is himself eligible to contest Lok Sabha elections. But unless he can have the verdict -- two years in jail -- overturned by a higher court, he will not be able to fight elections, as it is being strongly speculated. 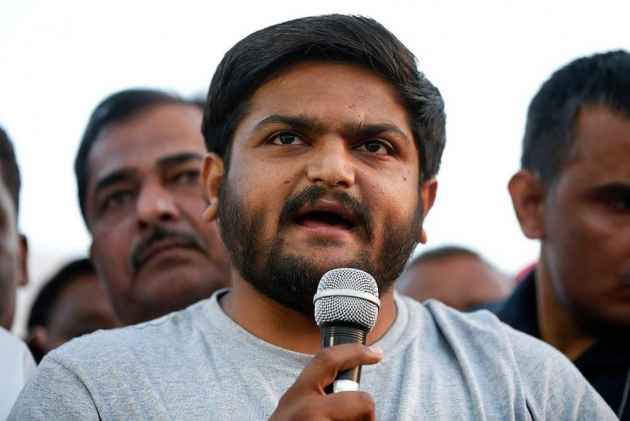 July 23, 2015. Snaking through the streets of Visnagar in North Gujarat’s Mehsana district, hopping onto all kinds of vehicles, a group of spirited youngsters got together to hold a rally. They were some tens of them till one of them emerged to begin a speech. Soon the tens turned into scores, and as he spoke it was swelling into hundreds. And then more joined. Just about eight-ten cops were there initially and they too were joined in by the dozens as the day progressed.

It is the same Visnagar town where a local court on July 25 pronounced the young -- one certain Hardik Patel -- guilty of rioting at the local BJP MLA’s office and sentenced him to two years in jail.

That day in 2015, except those accompanying him, hardly a few knew who this twenty-something man was. But what he spoke in a North Gujarati dialect made huge sense to the spattering of youngsters, most of them without jobs while many could not study for they had not got admissions in colleges. They realised he spoke on their behalf and their story, he was actually one among them, he did not look a political leader with the clichéd rhetoric.

Hardik Patel, who had just turned 22 three days ago on July 20, was pitching for reservations in government jobs and educational institutions for his community, Patidars or Patels, otherwise known to be quite prosperous landed farmers. The crowds, which were in the thousands by now, were lapping up every word and hailed him in unison.

This rally in Visnagar launched his Patidar Anamat Andolan Samiti (PAAS) and the pitched agitation that gained in strength over the years, leaving the ruling BJP and the opposition Congress alike dumbstruck. The Patidars were awestruck and the rest of Gujarat watched, wondering what hit them. In more than a decade they had only seen one person, Narendra Modi, generating instant crowds and the instant rapport.

Suddenly then, sometime after the rally, the office of local Visnagar legislator from BJP, Rushikesh Patel, was attacked and ransacked by scores of youngsters. Though they claimed they had nothing to do with it since the rally was long over and passed by, Hardik Patel and several of his supporters were booked and arrested. They were bailed out but Hardik was banned from entering entire Mehsana district.

The reason was not difficult to find: It is the home district of Prime Minister Modi, BJP national President Amit Shah and the then Chief Minister Anandiben Patel. But the ban was a case of too little too late since with that one rally, preceded by two small ones earlier, Hardik Patel had moved on. The next month, on August 25, lakhs of people from every nook and cranny of Gujarat gathered at the GMDC Grounds in Ahmedabad to demonstrate what this young man was all about. Much after the rally was over, violence broke out from nowhere and later as many as 14 Patel youngsters were killed in police action.

Over two-and-a-half years later, in the December 2017 assembly elections, the insurmountable BJP won with only seven seats more than defeat, 99, and the Congress got 77, as many as 16 seats more that what it had got in 2012. This is because huge number of Patidars broke the convention of decades of voting for the BJP and went with the Congress, thanks to Hardik Patel.

Hardik, now 25, is himself eligible to contest Lok Sabha elections. But unless he can have the verdict -- two years in jail -- overturned by a higher court, he will not be able to fight elections, as it is being strongly speculated. He has though put up a brave face, saying, “I have not come here to fight elections, they may send me to jail, I am not scared. I have remained in jail for nine months at a tender age and was never afraid.”

“The BJP Government had promised to withdraw all cases against the Patidars, what is this case then? Why they had not withdrawn it,” he told reporters.

Speaking to Outlook, he said, “This is because they are scared, and so keeping cases against me alive. This will boomerang on them yet again, you will see.”

The Visnagar court order has come just when he is planning to re-launch his movement for reservations from the same GMDC Grounds on August 25, this time with a fast-unto-death. “There is visible panic among the ruling masters because of the tremendous response I am getting for my programme,” asserts Hardik.