What does the Chinese film board do when it finds online chatsites buzzing with the uncanny parallels between the fictional film plot of Avatar and real life in China? 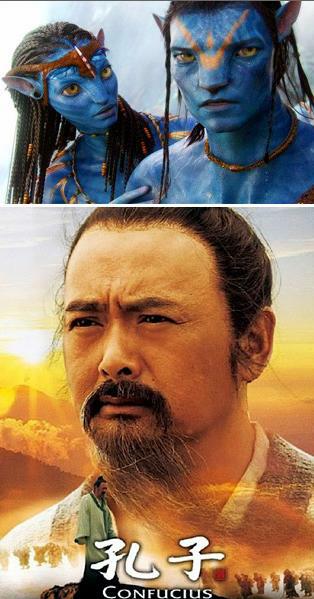 What do you, as a Chinese film board, do, when the Hollywood science fiction film Avatar smashes Chinese box office records in its first three weeks in theatres, when online chatsites are buzzing about the uncanny parallels between the fictional film plot – of developers raping the land and forcibly evicting the people – and real life in China? What if protesters against land grabs in southern China start to use Avatar as a rallying cry, amidst a dispute with Google and disagreement between the US and Chinese governments, about whether information should be allowed to flow freely to the Chinese public?

Apparently, you claim commercial reasons for pulling Avatar from most of the theatres on which it’s showing, and substitute a Chinese-made film about Confucius that contains a message – respect for hierarchy – you consider more appropriate for the mass consumption.

The problem is, the Jan. 22 opening of  Confucius proved so anaemic that the Chinese Film Board has already back-pedalled. It now says that cinemas without 3D screens can continue to show the 2D version of Avatar. Meanwhile, state enterprises and government offices have been block-booking Confucius tickets for their employees. Some theatres are giving away free Confucius tickets with Avatar tickets. Others are enticing those who buy Confucius tickets with the opportunity to purchase much sought-after Avatar tickets. And through it all, China’s outspoken online community has let it rip.

“Confucius is the enemy of democracy and freedom,” wrote one user of the chatsite Tianya. “He only tells people to become slaves, subject to exploitation and oppression.”

“Confucius is an ***-kisser,” another agreed. “That’s why all these government officials like him.”

Some on the Chinese chat site Tianya called for a boycott of Confucius, the movie, to teach the Chinese Film Board that it can’t shove propaganda films down Chinese viewers’ throats. Others voiced scepticism of the earlier explanation given by the State Administration of Radio, Television and Film (SARFT)’s Vice Director Zhang Hongsen, that pulling Avatar from 2D theatres was strictly a commercial decision, since ticket sales for 2D cinemas were only bringing in one-third of Avatar’s total take.

“While it is extremely hard to get tickets for 3D or IMAX (viewings of Avatar), only 20 percent of the 2D seats are taken,” he was quoted in the Guangzhou-based newspaper Southern Daily as saying. “So it is natural to pull the 2D version. That’s how the market works.”

Chinese internet users retorted that there are still long lines and full houses for the 2D version of Avatar, and for good reason. Most Chinese cinemas don’t have 3D capability, and most Chinese movie-goers can’t afford to pay twice as much to see the movie in 3D anyway.

Speculation has been rife about why Avatar was really pulled. Many suspect it’s because the themes in Avatar were too close to the bone for the Chinese government’s comfort.

“What is Avatar about?” asked one contributor on the website Mop. “It’s about the government’s forced evictions of people, and about them risking their lives to protest. No Chinese director dares to touch this topic.”

Even a commentator for The Global Times, a newspaper under the umbrella of the Communist Party-run People’s Daily said the plot in Avatar was “the spitting image of the violent demolition in our everyday life.”

If it seems a stretch that Chinese audiences are relating to 10-foot-tall blue aliens with tails in an environmental paradise under threat from greedy developers, consider the parallels. China’s break-neck pace of development in recent years has come at a steep cost to the environment, and has caused an estimated 30 million people nationwide to be evicted from their homes and their communities. Local governments then sell the land to developers with each – but not the original residents – pocketing a tidy profit. This is possible because, in China, all land technically belongs to “the people” – which is to say, the state. Even upscale urban dwellers are not able to buy their own land; only the house or apartment that sits on it, for a 70-year lease. Farmers and villagers are generally given only 30-year leases. Many of the 90,000 or so demonstrations China has each year are related to land rights.

Against this backdrop, it’s little wonder China’s film authorities would rather turn the public’s attention to a different kind of message.

Enter Confucius. Once vilified by Mao Zedong as a feudal counter-revolutionary, Confucianism has more recently been promoted by China’s leaders as a moral code for modern China, one that happens to encourage respect for the existing hierarchy.

A core part of Confucius’ original message was that leaders must lead with benevolence and morality, must respect the law and avoid corruption. Mao Zedong preferred the political philosophy of Legalism, put forth by a later philosophical rival of Confucius, called Han Fei. Legalism emphasizes using the law as a tool to keep the population under control, that everyone except the ruler can be punished. It was a philosophy favoured by many of China’s emperors, who followed the policy of “ru wai, nei fa” – being outwardly Confucian, but inwardly Legalistic, promoting the morals of Confucianism to the general public to discourage challenges and unrest, while using the law as a tool of control.

In the film Confucius, a beatific Chow-Yun Fat as the great man himself counsels leaders of warring states, “put your country ahead of yourself,” and “without civility, a state will descend into chaos.” He also tells leaders to be ethical and avoid corruption. One retorts, “Victory and defeat are what matter, not ethics.”

As a film, Confucius is neither entirely awful nor likely to win international awards. It’s put together as though the director doubted a film focused entirely on the inner life of Confucius and his ideals could really hold a Chinese audience. So instead of character development and complexity of plot, the film offers elaborate period costumes and settings, and the kind of epic, hi-tech-enhanced arrow-flinging battle scenes that have become a staple in mainland Chinese films about ancient China.

“I think they were borrowing from Braveheart, except the director of that movie did a better job,” sniffed a young movie-goer named Mao, as she came out of one of the first showings of Confucius at a Beijing cinema. But she said she did find the story of Confucius touching.

Another young woman, about to go in to see the film Confucius, said she didn’t know or care so much about his philosophy; she just wanted to see Chow-Yun Fat. As for reports that Chinese authorities may be trying to limit how many Chinese see the provocative themes in Avatar, lest they get ideas, she snorted. “That’s ridiculous. I think we should all be able to watch whatever we like.”

Just days before, China’s state-run media accused Google and US Secretary of State Hillary Clinton of “information imperialism” for suggesting more or less the same thing.