Congress leaders Rahul Gandhi and Priyanka Vadra greeted party workers and leaders in Karnataka for the "spectacular performance" in the local body elections. 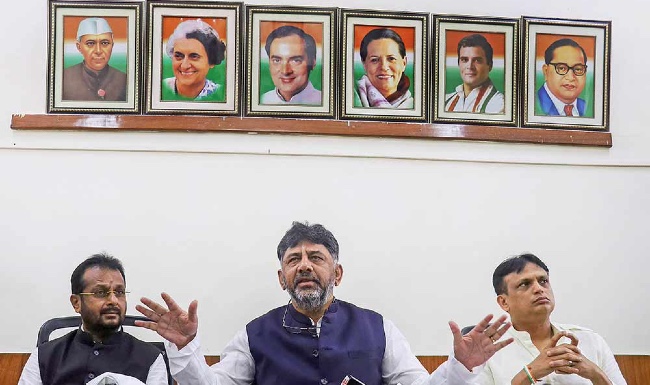 The Congress on Thursday revelled in its victory in the Karnataka local body polls and termed it a "clear indication" that issues such as anti-conversion laws do not strike a chord with the people of the southern state, who are "waiting to throw out the BJP government".

"It is evident from recent by-election results that people are waiting to throw out the illegitimate and corrupt BJP government that has eclipsed progress and paralysed governance," Congress general secretary Randeep Singh Surjewala said in a statement here.

He said the vote share in the Karnataka local body polls also indicates a huge slide in the Bharatiya Janata Party's (BJP) popularity in the state. "The vote share of Congress came up to 42.06 per cent, where as for BJP and JD(S), it stood at 36.9 per cent and 3.8 per cent respectively," Surjewala, who is the in-charge of Congress affairs in Karnataka, said.

He said successive election results of late have clearly established that the voters care the most about price rise, falling incomes, jobs, rampant corruption and the BJP government's "apathy" towards public welfare.

"Manufactured issues like anti-conversion laws and management of temples are not what people are going to be taken in with. "Progressive Kannadigas realise that such issues are meant to serve no one but divisive forces. Every second that the spurious and corrupt Bommai government continues, it is an anathema to development and progress," Surjewala said.

In the elections to 58 urban local bodies, Surjewala said Congress emerged victorious in 500 wards, against the 435 won by the ruling BJP. The JD(S) bagged only 45 wards. Surjewala congratulated Karnataka Congress chief D K Shivakumar, CLP leader Siddaramaiah, the MLAs and all senior leaders of the party on the electoral outcome.

"Their continued hard work and unity in action will bring the Congress back to power in the state and usher in a new era of putting Karnataka as the number one state in development," he said.