Priyanka Gandhi, who is also the Congress in-charge for Uttar Pradesh, had earlier released the party's election manifesto for women, titled "Shakti Vidhan". 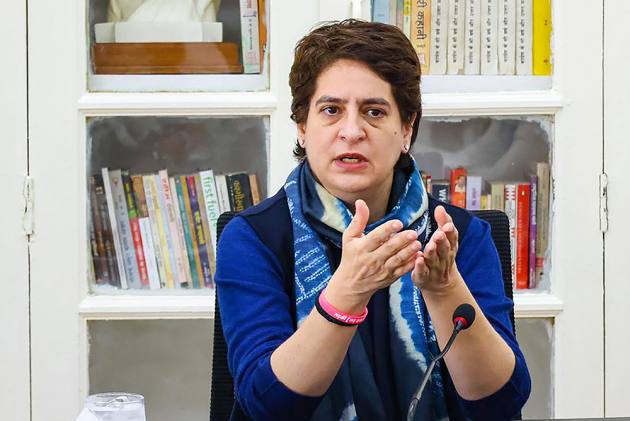 Hours after Prime Minister Narendra Modi addressed a programme in Prayagraj on Tuesday to empower women, especially at the grassroots level, the Congress and the Samajwadi Party (SP) took jibes at him.

In a tweet in Hindi, Congress general secretary Priyanka Gandhi Vadra said, "Women of Uttar Pradesh, see! You have taken the first step and Prime Minister Narendra Modi has bowed before you. But at this point of time, only the leaf has moved, the storm of women power is about to come. The unity of the sisters will usher in a revolution." The Congress has announced that 40 percent of its candidates in the 2022 Uttar Pradesh polls will be women.

Priyanka Gandhi, who is also the Congress in-charge for Uttar Pradesh, had earlier released the party's election manifesto for women, titled "Shakti Vidhan". Addressing a programme in Rae Bareli on Sunday, she had accused the rival political parties of ignoring women, saying they started talking about women only after the Congress gave the slogan of "Ladki Hoon, Lad Sakti Hoon (I am a girl and I can fight)".

"One small initiative has awakened all the political parties. It seems Modiji has realized for the first time in his political life that he has to do something for women, else he will not get their votes. Hence, a large meeting is going to take place and women will be brought in buses. All of them will be wearing yellow sarees and the prime minister will deliver his speech," Priyanka Gandhi had said.

In a statement issued by the SP, party chief Akhilesh Yadav, while pointing to the eighth leg of the Samajwadi Vijay Yatra in Mainpuri, said, "This is a historic programme. This is a rally of the public. The rally of the BJP takes place using government money. The crowd of beneficiaries was gathered in transport department buses. The people of Mainpuri will vote for an 'upyogi' (useful) government and not an 'unupyogi' (useless) government."

Speaking to a television news channel, he said, "The people of Uttar Pradesh have made up their mind to remove the BJP from the state. At the BJP's programme, women from the entire state were called. From lekhpals (revenue officials) to district magistrates -- all were making efforts to fill the buses (with beneficiaries). Government workers organised the meeting (of the prime minister). It was a government event and not a political meeting."

"Here (in Mainpuri), people came on their own. This was a programme of one district, which is proving to be heavier than their (BJP's) programme in some districts. The Vijay Rath of the SP is proving to be heavier on their six chariots (Jan Vishvas Yatra)," the former Uttar Pradesh chief minister said. He also said in the BJP regime, the number of incidents involving atrocities on women has been the highest in Uttar Pradesh. Yadav cited the National Crime Records Bureau (NCRB) data and also referred to the Hathras incident.

In a tweet in Hindi, he said, "The SP government had done the true work of women empowerment by providing laptops, Kanyavidya Dhan, 1090 helpline and ambulances. 'Dikkat' (difficulties), 'killat' (shortage) and 'zillat' (humiliation) have made women turn against the BJP. The women of Uttar Pradesh will prove to be heavy on the BJP."

Taking a swipe at the BJP's political rivals, Modi on Tuesday said the government is trying to raise the age of marriage for women to 21 years so that they can have time to study and progress in life, but this has upset some people. Addressing the rally in Prayagraj, he also said 25 lakh of the 30 lakh houses given in the state under the Pradhan Mantri Awas Yojana are registered in the name of women. This shows the government's commitment to "true empowerment of women", the prime minister said.

"We are trying to increase the age of marriage for women to 21 years so that they can have time to study and progress. The country is taking this decision for its daughters. Everyone is seeing who are the ones who have problems with this," he said.