The opposition party questioned the government on why it is not reducing the prices when the global crude oil rates are falling and alleged that this is nothing short of playing fraud with the people of the country. 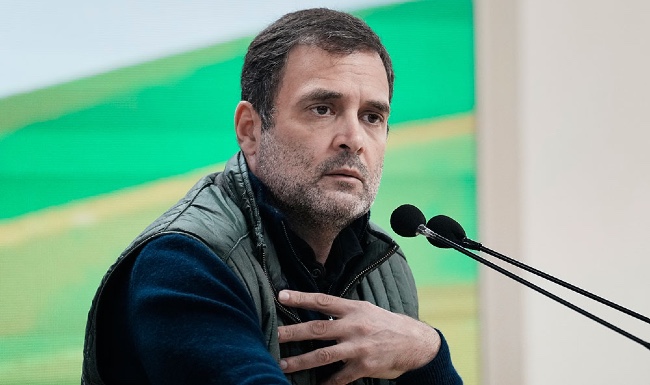 The Congress hit out at the Centre on Wednesday over the high prices of petrol and diesel and said if it brought down taxes to the 2014 levels, there would be a substantial fall in the fuel rates.

Congress leader Rahul Gandhi called for reducing the fuel prices after reports emerged that the global crude oil rates have fallen. He tagged a news report on Twitter that said the price of crude oil has fallen by USD 7.3 a gallon and the price of petrol will fall by Rs 8 per litre if the oil companies reduce the rate. "Enough is enough, at least reduce the prices of petrol and diesel now," Gandhi said in a tweet in Hindi, using the hashtags "PetrolDieselPrice" and "FuelLoot".

Congress spokesperson Gourav Vallabh told a press conference here that if the Bharatiya Janata Party (BJP) government reduces the taxes on fuel to the levels of 2014, when the United Progressive Alliance (UPA) was in power, the prices of petrol and diesel would come down by about Rs 26 and Rs 25 per litre respectively.

"We want to say that if the (Narendra) Modi government can maintain the excise duty, which was levied in 2014 on petrol and diesel, and can transfer the benefit of the fall in the crude oil prices, the petrol price will reduce by Rs 26.42 per litre and the diesel price will come down by Rs 25.24 per litre," he said.

Vallabh alleged that instead of passing on the benefits to the final consumer, the government is adding the reduction or downfall in the crude oil prices as the profit of the PSUs and this profit is directly going in the form of dividends to the Centre. "If this is not a fraud with the people of our country, then what is it?" he asked, citing the quantum jump in the profits of the oil PSUs in the last few years.

Congress general secretary and chief spokesperson of the party Randeep Surjewala also called for stopping the "loot" and reducing the fuel rates. "'Lootjeevi' Modi government, why does it not stop the dacoity on the pockets of the poor, middle class and salaried people?" he asked on Twitter. Surjewala said now that Assembly elections in five states are approaching, the fuel prices should be reduced. "The 'election season' is also here. Should the government be reminded that when crude oil rates fall, the prices of petrol and diesel are reduced...? #StopFuelLoot," he said in a tweet in Hindi.

Vallabh said the dynamic pricing for petrol and diesel is nothing but "political pricing". "Modiji's dynamic pricing for petrol and diesel in essence can be summarised in one sentence, 'heads I win, tails you lose'. In other words, if there is an increase in the crude oil prices in the international market, it will be transferred to the final consumer, but if there is a fall in the global crude oil prices, the benefit will not be shared with the final consumer," he alleged.

Vallabh also shared research findings that the crude oil price for the Indian market in November 2021 were USD 80.64 per barrel, which in December was USD 73.3 per barrel. "When crude oil prices got reduced in December by USD 7.34 per barrel, what benefits did the final consumers get? The answer is none, zero," he alleged. The Congress leader said if this benefit is shared with the ultimate consumer, the petrol prices will come down by Rs 8 per litre and the diesel rates will fall by Rs 7 per litre.

Instead, the reduction in the crude oil prices in the international market is going into the profit kitty of the oil PSUs, he claimed. Vallabh said the profits of the oil PSUs in September 2021 vis-a-vis September 2019 increased by more than 20 times. The Congress has been attacking the government over the high fuel prices and high taxes on petrol and diesel.