Pandey said that after the success of marathons in Meerut, Jhansi and Moradabad, today's programme here was also successful and alleged that Yogi Government is trying to defame the marathon programme but the girls have rejected this negative politics. 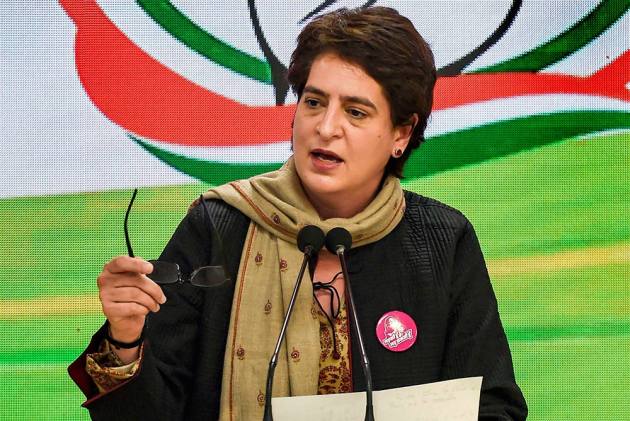 Girls in "large numbers" turned up to participate in the 'women marathon' organised by the Congress here as part of its 'Ladki Hoon, Lad Sakti Hoon' (I am a girl and I can fight) poll campaign here on Tuesday.

The marathon, which was earlier scheduled to take place on Sunday had to be rescheduled for Tuesday after the district administration denied permission citing prohibitory orders, was flagged off by in-charge of party affairs in Himachal Pradesh, Rajiv Shukla. The five-kms long marathon was covered by the enthusiastic participants in the presence of senior leaders, including UPCC president Ajay Kumar Lallu, Youth Congress president Srinivas B V who were present to encourage them, said Congress spokesman Uma Shankar Pandey here.

Special arrangements for security and other purposes had been made to ensure the smooth conduct of the marathon, he said, adding that a vigil was maintained with the help of drone cameras. Alleging that the marathon was on Sunday stopped on the excuse of prohibitory orders, Pandey termed it as a conspiracy of the Yogi government against the 'betis' (daughters). He said similar efforts were made on Tuesday as well but heavy turnout of girls, almost double of what expected, foiled them.

Pandey said that after the success of marathons in Meerut, Jhansi and Moradabad, today's programme here was also successful and alleged that Yogi Government is trying to defame the marathon programme but the girls have rejected this negative politics. On Sunday , the Congress had dubbed Chief Minister Yogi Aditynath as "Bulldozernath" or the lord of bulldozers, allegedly out to trample the dreams of youths after the marathon was disallowed.

The party had accused the chief minister of crushing the dreams of girls who wanted to run a marathon organised by the party in Lucknow. "The destructive government of 'Bulldozernath' tramples upon the dreams of the youth repeatedly. Sometimes by leaking question papers, sometimes by not declaring recruitment (results) and sometimes by using force against them," the Congress party had said in a tweet. "This time, the anti-women bulldozer of Yogi has run over the dreams of brave girls," the party had said. "But he does not know that the one whose time has come, no power on this earth can stop him. The slogan #LadkiHoonLadSaktiHoon is echoing in the state. Women power is ready to stake its claim to power," another party tweet said.

In a Hindi tweet, Priyanka Gandhi Vadra had said, "Yogi Adityanath ji, you speak against the women by talking about controlling them. It is for this reason that you did not allow girls to participate in the marathon in Lucknow." "The girls of Jhansi have sent a message that they will not tolerate it and fight for their rights," she added. Notably, the UP government authorities have been using bulldozers to demolish the illegal property of criminals and gangsters and it is also often referred to by the BJP leaders in their speeches in the state. Priyanka, who is also the state party in-charge working for the revival of the Congress in Uttar Pradesh has made a slew of promises to the women, including giving 40 per cent tickets to women candidates in the coming assembly polls.