Thousands of farmers Tuesday marched towards Delhi over demands ranging from farm loan waiver to cut in fuel prices, blocking traffic movement on arterial roads leading to the national capital. 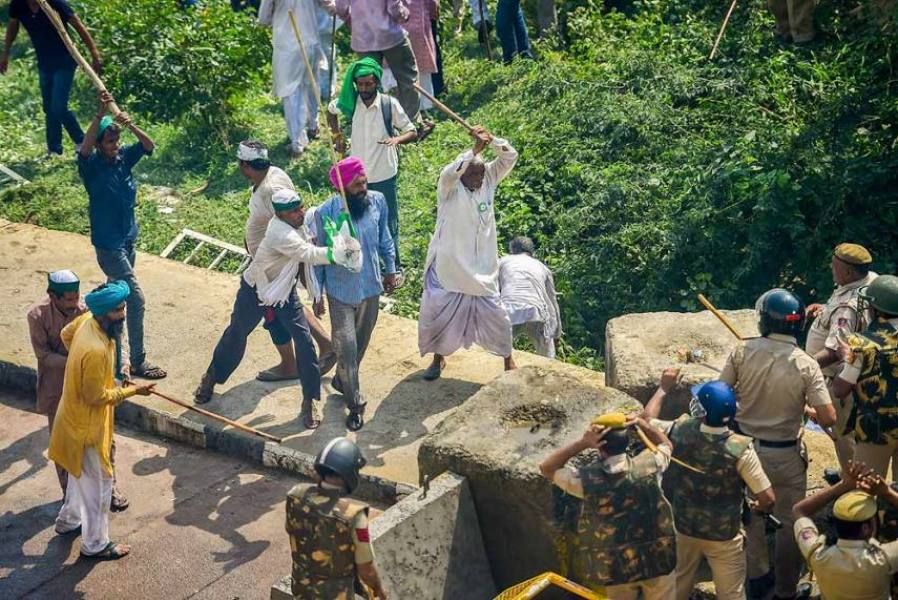 The Congress on Tuesday condemned Modi government over the police action against farmers marching towards Delhi saying, "the Baadshah in the Delhi Sultanate is drunk with power".

Criticising the police action, Congress spokesman Randeep Singh Surjewala said if the Centre can write off a huge debt of a few industrialists why it could not waive the loans of farmers.

He criticised Prime Minister Narendra Modi, alleging that "arrogance has gone to his head".

"Instead of hearing them out, farmers are brutalised and beaten up. The Baadshah in the Delhi Sultanate is drunk with power," the Congress leader alleged.

He was talking to reporters at the venue of the Congress Working Committee (CWC) meeting here in Maharashtra.

Thousands of farmers Tuesday marched towards Delhi over demands ranging from farm loan waiver to cut in fuel prices, blocking traffic movement on arterial roads leading to the national capital.

The farmers, riding tractors and trolleys, broke barricades of the Uttar Pradesh (UP) Police and then started proceeding towards the barricades put up by the Delhi Police, a senior police officer said.

They were stopped at the Delhi-UP border with police using water cannons and tear gas to disperse them.

Surjewala said, "If the Modi government can write off Rs 3.17 lakh crore debt of a few industrialists, why can't he write off loans of 62 crore farmers."

"Can't the farmers come to Delhi to get their grievances heard, ask for debt clearance and adequate price for their produce," he wondered.

"CWC strongly condemns the lathi-charge and barbaric action against farmers," he tweeted in Hindi.

The Congress leadership has converged in the Sevagram village, located around 10 km from Wardha district headquarters, to attend the meeting of the CWC, the highest decision-making body of the party.

"Today is the day of peace. The farmers were pressing their demands through satyagraha and they got lathi charged instead of loan waiver, which is very unfortunate," he said.

Leader of Opposition in the Rajya Sabha Ghulam Nabi Azad also hit out at the Centre over the incident.

"The government should not have resorted to such tactics on the occasion of the birthday anniversaries of Mahatma Gandhi and Lal Bahadur Shastri. I condemn the incident, it is very unfortunate," he said.

"It is very unfortunate for the country. There are ways to communicate and deal with protesters pressing for their demands. But the way the government treated these protesting farmers is very undemocratic. This is happening on the birth anniversary of Mahatma Gandhi," he said.