Chairman M Venkaiah Naidu chided the members for their "unbecoming" behaviour and asked them to resume their places. 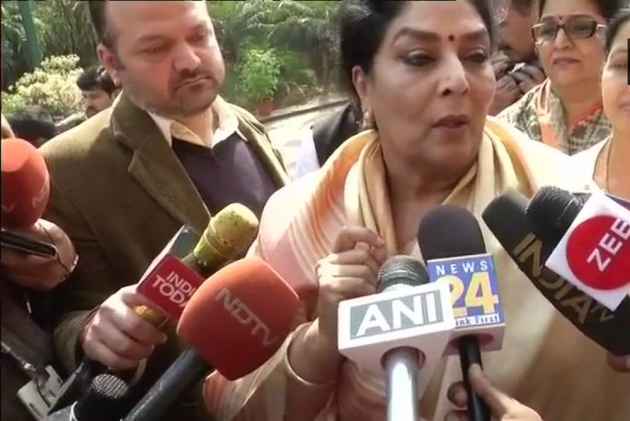 This is highly objectionable, and I am going to file for privilege: Renuka Chowdhury, Congress on Kiren Rijiju posting a video of PM Modi's remarks on Renuka Chowdhury in Rajya Sabha yesterday. pic.twitter.com/9d7gEL0IqC

No sooner had the House mourned the death of its former member Frida Topno and the listed papers were laid on the table, Congress members were on their feet protesting against Modi's dig at Choudhury during his reply to the debate on Motion of Thanks on President's address yesterday.

Chairman M Venkaiah Naidu chided the members for their "unbecoming" behaviour and asked them to resume their places.

"I have no option other than to adjourn the House," he said, suspending the proceedings till 1200 hrs.

Yesterday, during the reply, Modi had questioned the Congress's claim of being the originator of the biometric national ID Aadhaar when he said that the then Home Minister L K Advani had in 1998 spoken about an all-purpose national ID in Rajya Sabha.

This led to Chowdhury bursting into loud laughter. Naidu had disapproved of the behaviour but Modi asked him not to stop Chowdhury.

"Sabhapati ji meri aapse vinti hai Renuka ji ko kuch mat kahiye. Ramayan serial ke baad aisi hansi sunne ka saubhagya aaj jaake mila hai (I request you not to say anything to Renuka ji. After the Ramayan serial, we got the privilege of hearing this kind of laughter only today," he said, to the amusement of top BJP leaders and other ministers sitting around him.

Chowdhury had protested the remarks but the chairman did not allow her comments to go on record.

"We also urge the RS Speaker Shri Venkaiah Naidu to not act in a partisan manner and accord due respect to a fellow member of the house," it said.