Congress Failed To Unite Opposition To Take On Modi

Unlike his predecessors, Modi has a bigger plan -- to edge out regional parties in Delhi, West Bengal, Tamil Nadu, Odisha and Bihar 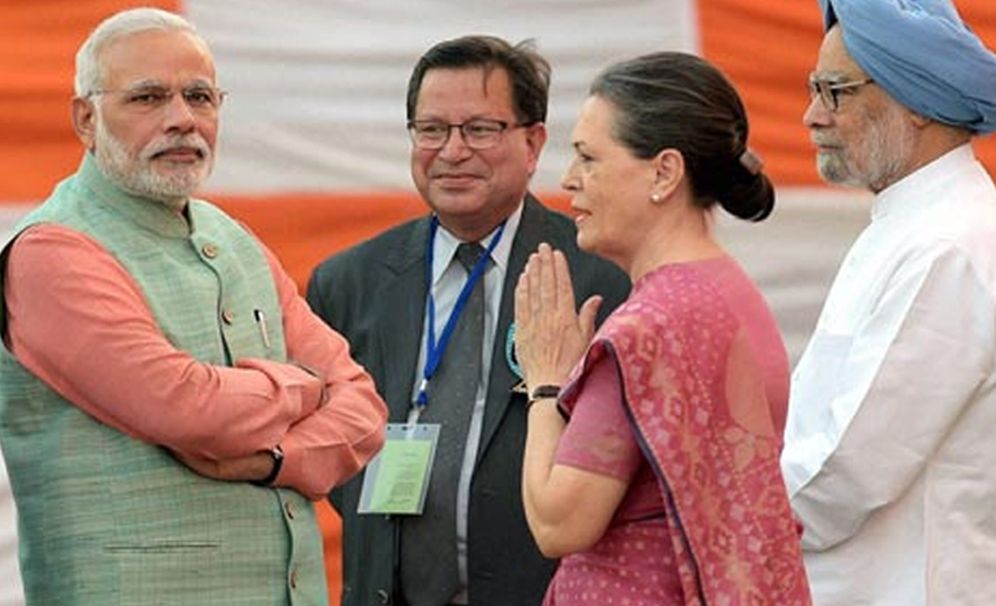 Recent surveys conducted to understand the mood of the nation, three years after the BJP came to power, show that Narendra Modi and his team still remain the people's prime minister, even as desperation to see the results is rising.

Modi and his Team Bharatiya Janata Party have systematically taken on the major opposition forces. The principal opposition party, the Congress, has been reduced in margins – the party only managed to win Punjab in the recent assembly polls held in five states.

“Congress Mukt Bharat” -- the BJP's slogan at the outset –– was not by chance but a major political strategy. But despite getting setbacks one after another in the last three years, Rahul Gandhi and his feeble party failed to show signs of taking the bull by the horns.

Unlike his predecessors, Modi has a bigger plan -- to edge out state based parties in Delhi, West Bengal, Tamil Nadu, Odisha and Bihar, and this doesn’t look astonishing after the landslide victory in Uttar Pradesh.

In other words, the BJP has worked on a two-pronged strategy -- focusing on national as well as state level parties while undercutting the opposition parties’ presence in their respective zones of influence.

On the other hand, the opposition simply failed to come together and put up a united front. Despite being a smaller partner in the "Mahagatbandhan" in Bihar, political parties have always looked up to the Congress -- a national party -- to lead from the front. But it looks the Congress is losing that steam in the BJP’s growing influence.

Tyagi doesn’t hesitate in accepting that Modi has taken the lead to overcast opposition parties.

“Nitish Kumar, Mamata Banerjee and to certain extent Arvind Kejriwal were giving Modi a stiff opposition once. But now, Banerjee  and the Trinamool Congress are under the scanner over alleged various scams. The same goes with the Kejriwal-led Aam Aadmi Party. Therefore, there is no other option but to have a Bihar-like mahagatbandhan with Nitish Kumar at the all India level,” he said.

Tyagi said had the Samajwadi Party, the Bahujan Samaj Party, the Congress and the Lok Dal come together in UP, they would have won 325 seats.

“In the existing scenario, there is a sense of despair among people and political workers whereas BJP workers are upbeat and enthusiastic,” said Tyagi while expressing deep disillusionment with the Congress.

According to Suhas Palshikar, a political commentator, in the last three years, the non-BJP parties have failed to make any impact as opposition.

“They have lacked coordination, they do not have any concrete progaramme to offer,” quipped Palshikar.

While the absence of a strong opposition is “bad”  for democracy,  Palshikar said the opposition parties should form a common platform in Parliament to counter the wrong policies of the government.

While the most opposition parties appear to have lost the urge to mobilise public opinion and engage in mass struggles against the government, the BJP saw a massive surge in its popularity in many states in the last three years, with “impressive gains” especially in states such as Odisha.

“This is a warning to the non-BJP parties, particularly the state parties. The BJP however, is also using all its powers to put state governments of other parties into a difficult situation,” said Palshikar.

Far from the conventional thinking that 2014 was the peak for the BJP and that there can only be a downhill slide, Modi and his party president Amit Shah’s mission was to reach greater heights.

Modi gave a spin to Indian politics and became the game changer. Be it the surgical strikes on Pakistan or announcing the note-ban, people of this country witnessed his determination and how he tackled all criticisms.

The BJP’s ability to form government in Assam and Haryana, where they were almost non-existent with a handful of MLAs, and its recent win in the MCD elections appear to have put pressure on the Navin Patnaik government in Odisha too. The BJP will be directly fighting the Biju Janata Dal and it is hoping that Modi’s mantra of development will help it win.

“In Odisha, we won’t be surprised if the national trend may have an influence,  Navin Patnaik’s popularity in the local governance. The BJP seems to have captured the imagination of the people. They have gained an ascendency by capitalising on the anti-incumbency sentiments in the non-BJP-ruled states,” said Sandeep Shastri, a political commentator.

A Congress insider told Outlook: “We can’t go lower than this, we have become almost faceless-nameless. There is no aggression in the party. Three years have passed and the party hasn’t been able to take on the BJP on any issue leave alone doing something for the people.”