Congress In His DNA

After divorcing the BJP and flirting with AAP, Navjot Singh Sidhu finally decided to settle down with the Congress. 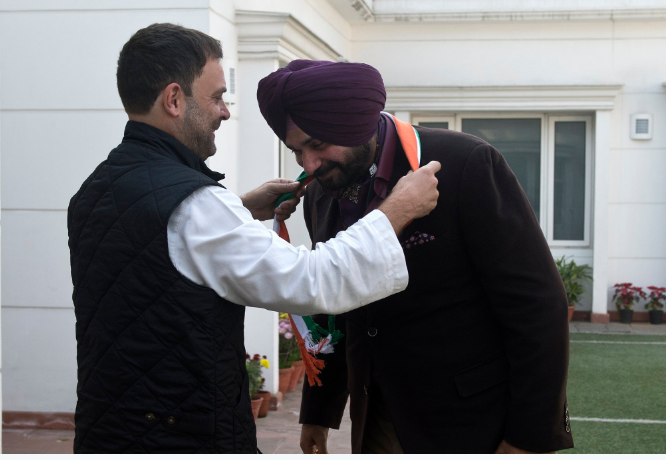 After divorcing the BJP and flirting with AAP, Navjot Singh Sidhu finally decided to settle down with the Congress and formally joined the party today. His formal entry into the party came after he met Congress vice president Rahul Gandhi.

In a tweet in which he put out a photograph of himself with Rahul Gandhi, he wrote, "Beginning of a new inning. On the front foot........  Punjab, Punjabiyat & every Punjabi must win !!!"

Sidhu had deferred his joining the Grand Old Party until his final meeting with Rahul Gandhi as he had wanted him to be present and witness his joining. He is likely to contest from Amritsar East or will face-off against Sukhbir Badal from Jalalabad. Born on October 20, 1963, Sidhu describes himself as a politician, a former cricketer, commentator and an entertainer. Even during his cricketing days, he was known to be impulsive and unpredictable, taking decisions, which many thought, were somewhat irrational.

Sidhu, 53, who played for India in more than 50 Test matches and more than 100 ODIs scoring over 7,000 runs, retired from all forms of cricket in December 1999, and soon after that took to television commentary, TV shows and eventually joined politics.

As against his father who was a Congress general secretary, Sidhu opted to join the BJP and was elected to the Lok Sabha from Amritsar in 2004 on a BJP ticket.

In 2006, after being convicted for homicide in a road rage incident which took place in 1988, Sidhu resigned from the Lok Sabha. The Supreme Court, while hearing his appeal later, suspended his sentence and in February 2007, Sidhu contested the Lok Sabha bye-election, once again from Amritsar, and won. He went on to contest the 2009 general elections and retained his seat from Amritsar.

In 2014, Sidhu did not contest the Lok Sabha elections and instead, at the party's behest vacated his seat for Finance Minister Arun Jaitley who lost to Congress' Capt Amarinder Singh. To placate Sidhu, the Saffron Party had offered him another seat, but he had declined to accept. Further, the Narendra Modi government nominated Sidhu to the Rajya Sabha in April 2016.

Less than four months later, an unhappy Sidhu resigned from the Upper House on July 18, 2016.

After that began a series of flip flops by Sidhu in which he flirted with the AAP and even held negotiations with the AAP convenor and Delhi Chief Minister Arvind Kejriwal. However, that relationship was not to be and when talks failed - he wanted to be the AAP's chief ministerial candidate for Punjab, but Kejriwal did not agree to that - with the AAP, he refused to join the newest political force in the country.

Unhappy with the major parties, Sidhu, along with hockey player turned politician Pargat Singh and the Bains brothers, launched his own party, the Awaz-e-Punjab on September 8, 2016. While announcing the launch of his own party, Sidhu left no stone unturned in lashing out at Kejriwal.

Amid all the uncertainty and Sidhu's flip flops, Capt Amarinder Singh had, in September 2016, said that Sidhu has Congress in his DNA and it was just a matter of time that he would join the party.

Finally, after prolonged negotiations with the Congress, and a couple of months after his wife Navjot Kaur Sidhu and Pargat Singh joined the Congress, he joined the Grand Old Party of India.