Congress In Kerala Continues To Be In A State Of Flux

There seems to be no end to the infighting in the Kerala Congress with faction leaders taking their grievances to the party high command. 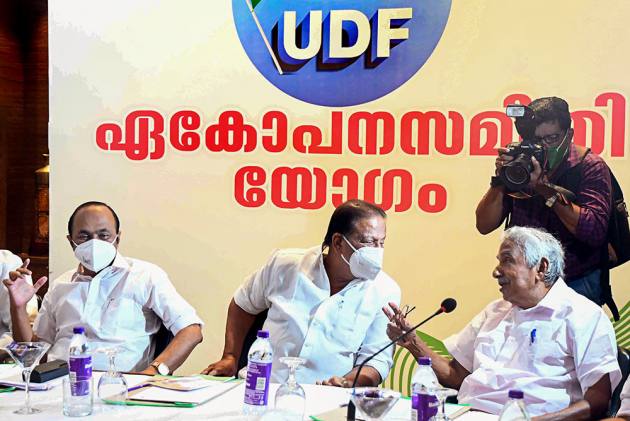 There seems to be no end to the infighting in the Kerala Congress with faction leaders taking their grievances to the party high command as two-time former Chief Minister Oommen Chandy stays put in Delhi.

Even though the party has been seeing internal difference since long, matters took a turn for the worse in May when the party suffered a rout in the April 6 Assembly polls, when the CPI(M)'s Pinarayi Vijayan easily retained power.

Following the defeat, the party high command stepped in and decided to go for a major overhaul and appointed K. Sudhakaran as the new state party president and later V.D. Satheesan as Leader of Opposition ruffling many feathers. This left the erstwhile faction managers Oommen Chandy and outgoing Leader of Opposition Ramesh Chennithala fretting and fuming.

The party then witnessed new formations with traditional rivals Chandy and Chennithala joining hands against Sudhakaran and Satheesan.

Luck favoured Sudhakaran and Satheesan, when the all-powerful K.C. Venugopal decided to support the new faction.

The old guard of Chandy and Chennithala decided to fight back and has decided to play spoilsport after Sudhakaran decided to go ahead with the revamp of the party at the lower and district levels.

According to a source, Chandy has reached Delhi and will meet party president Sonia Gandhi.

"The Chandy-Chennithala faction is of the view that if there are plans to conduct organisational polls, then the present revamp should not happen. They know that through a revamp - which is mere nomination of new office-bearers, they will be able to further consolidate the party and the biggest losers will be the old guard. Already if one sees the manner in which disciplinary action has been taken by Sudhakaran, it is a clear indication that they are weakening the old guard," said the source who did not wish to be identified.

The latest to be given a show-cause notice is one of the closest aides of Chandy in the state capital district - M.A. Latheef, a former party secretary and treasurer.

As soon as Latheef was suspended, his supporters organised a massive show of strength and marched down the streets in the capital city.

"The strategy of Sudhakaran is very clear, target the leadership in the Chandy-Chennithala faction and weaken them. But the seasoned veterans, especially Chandy, who though not keeping good health, is sure to use his six decades in politics to put up stiff resistance. What happens is going to be unpredictable, but for the old guard, they have nothing to lose, but for Sudhakaran and Satheesan, it is not like that," added the source.

With Chandy now in Delhi, sensing that things can go out of hand, Satheesan on Wednesday told the media that everything will be discussed in the party, especially with the veteran leaders.

"If one looks around, revamp has taken place in other states also. I will speak with all the leaders," said Satheesan.

Reports have come out that there have been complaints against them (Chandy-Chennithala) by way of e-mails and fax messages to the party high command stating that they are trying to destroy the party and their aim is to bargain for posts for their children.

The children of Chandy and Chennithala are waiting in the wings.