Union Home Minister Rajnath Singh appealed to Naxals to shun violence and join the mainstream, and expressed confidence that the country would be free from the menace in next three to five years. 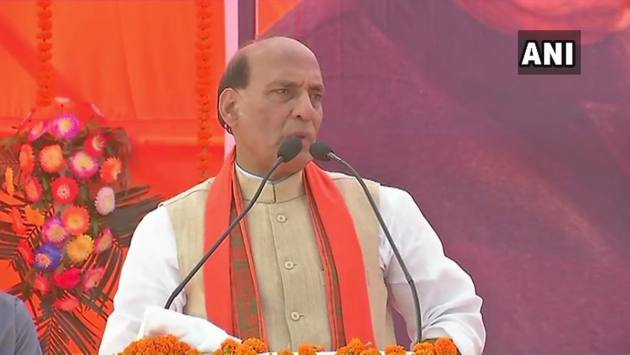 Congress and other opposition parties were facing a credibility crisis in Chhattisgarh and have lost people's faith, Union Home Minister Rajnath Singh said on Thursday.

Speaking to reporters here during the second phase of state Assembly polls on November 20, Singh said Congress is facing a credibility crisis in Chhattisgarh.

We appeal to the Naxals to surrender. The government will take care of their rehabilitation: Union Home Minister Rajnath Singh addressing a public rally in Chhattisgarh pic.twitter.com/1bsxKTqNWL

"That is why it has not projected a chief ministerial candidate in the state. Other opposition parties are also grappling with the same problem," he said.

Singh said the Congress election manifesto "is an admission that Congress has lost its credibility" and as meaningless as a post-dated cheque in a bank that is on the verge of bankruptcy.

The party has lost its inherent strength, he said.

He appealed to Naxals to shun violence and join the mainstream, and expressed confidence that the country would be free from the menace in next three to five years.

"Naxal menace is on the wane. Earlier, around 90 districts were in the grip of Naxalism, but the number has now come down to 10-11 districts. The menace will be wiped out of the country in next three to five years," he said.

To a query on non-payment of bonus to grain producing farmers by the state government for a couple years, he said, "It is true that bonus was not paid to farmers for a couple of years due to certain circumstances. But the Chhattisgarh government  paid the bonus this year and will continue to do so subsequently".

Singh did not specify why did the state government fail to pay bonus to farmers for the last few years.

The Opposition has slammed the Raman Singh-led BJP government in the state for paying bonus to farmers ahead of polls, adding the measure is aimed at reaping "political gains".

The first phase of Assembly elections was held in Chhattisgarh on November 12, where 18 seats went to polls, out of which 12 are reserved for the Scheduled Tribes, while one is a Scheduled Caste-reserved seat.

76.28 per cent polling was recorded in the first phase of the Chhattisgarh polls held Monda which was 0.35 higher in the poll percentage from 2013 Assembly polls.Last term's poll was recorded at 75.93 per cent.

The result of the assembly polls will be announced on December 11.