Congress Parades Its 44 MLAs Lodged In Bengaluru Resort, Accuses BJP Of Offering Rs 15 Crore To Each Of Them 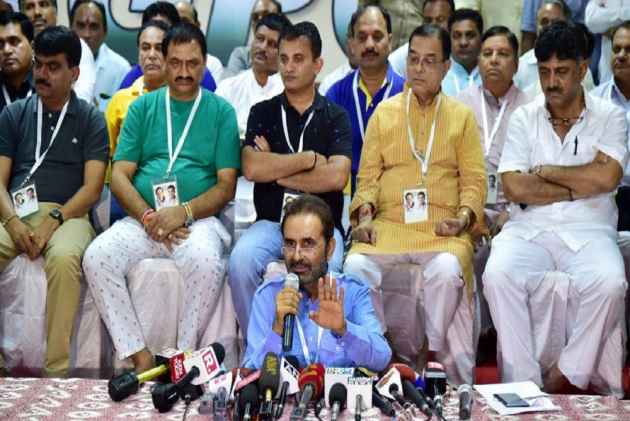 Days after 7 of its MLAs resigned from the party, the Congress on Sunday paraded its 44 MLAs lodged in a resort on Bengaluru outskirts before media to scotch reports of disunity in their ranks, and accused the BJP of trying to poach them by offering a bribe of Rs 15 crore each to cross-vote in the Rajya Sabha polls.

Apparently rattled by the desertion of its six MLAs since Thursday, the party has shifted over 40 of them to the resort to keep its flock together ahead of the August 8 RS poll for which it has fielded Ahmed Patel, the high-profile political secretary to Congress president Sonia Gandhi.

The resignation by the six MLAs, including Balwantsinh Rajput, Congress chief whip in the Assembly, followed the exit of party stalwart and former chief minister Shankarsinh Vaghela. The resignations brought down the Congress's strength in the Assembly from 57 to 51. Three of the six later joined the BJP.

Rajput, a relative of Vaghela, has now been fielded by BJP to take on Patel, who is seeking a fifth Rajya Sabha term.

"Our legislators have not come here to enjoy. We brought them here to save democracy as they were being poached by BJP, using money and muscle power," AICC Spokesperson Shaktisinh Gohil told reporters at the resort as the MLAs sat behind him.

"BJP tried to buy 22 of our MLAs before the Rajya Sabha polls for cross-voting by offering them Rs 15 crore each," he alleged.

The BJP, however, rejected the allegation that it was behind Congress MLAs walking out of the party. Union minister Prakash Javadekar also wondered if Congress lawmakers quitting the organisation were "purchasable".

The BJP also took a swipe at Congress over the lavish stay of its MLAs at a resort when people were reeling under floods back home in Gujart.

There were reports that several MLAs supporting Vaghela, who has still not resigned from the Assembly, were among those staying at Egleton Golf Resort.

With 51 MLAs on his side, the Congress candidate would easily sail through the vote, but more desertions could put his chances into jeopardy.

The presidential election had seen cross-voting by Congress legislators with the joint opposition candidate Meira Kumar garnering votes of only 49 MLAs against the Congress's then strength of 57 in the state Assembly.

Gohil claimed Congress has the assured support of 60 MLAs and BJP should not even dream to get Patel defeated.

"We have 44 legislators here and we are also in touch with seven legislators, who are not here with us. A few others from other parties including NCP are also voting for us. In all, we have 60 legislators voting for our candidate," he asserted.

"Gujarat Congress leaders are levelling allegations at the BJP in Bengaluru. It is like a thief criticising a cop. If their leaders are leaving them, it has nothing to do with us," Javadekar told PTI in New Delhi.

He said those who quit the Congress included leaders like Vaghela, a former chief minister and the leader of opposition, its chief whip Balwantsinh Rajput and its spokesperson Tejashreeben Patel.

"They are all strong leaders. Nobody can purchase them.

The Congress should look inwards and think why such senior leaders are leaving it. The truth is that its only goal is to save Rahul Gandhi in the country and Ahmed Patel in Gujarat," he said.

Gujarat Chief Minister Vijay Rupani, who reached flood- hit Banaskantha today, said the decision to fly Congress MLAs out of the state was taken by Ahmed Patel out of his "greed" to win the poll.

"Sonia Gandhi's love for her son Rahul has drowned the Congress across the country. Similarly, Patel's greed to save his Rajya Sabha seat will sink Congress in Gujarat," he said.

Patel, who also visited flood-affected Banaskantha district today, mounted a counteroffensive against Rupani, alleging, "Our MLAs were forced to leave Gujarat as they and their family members were being tortured by the state government."

The Congress heavyweight said before the MLAs from flood ravaged areas flew out of the state they had started relief camps and were still keeping a close watch on the situation from Bengaluru.

Of the total 11 RS members from the state, the term of three--Smriti Irani and Dilipbhai Pandya (both BJP) and Ahmed Patel--is ending on August 18. BJP has fielded party chief Amit Shah and renominated Union minister Smriti Irani for two seats and put up Balwantsinh Rajput for the third which is held by Patel.