Opinion | Congress Should Think Beyond Gandhi Family, Reinvent Itself For Survival

The Congress party has to reshape and sharpen itself for re-emerging as an instrument of public usefulness, writes Shastri Ramachandaran. 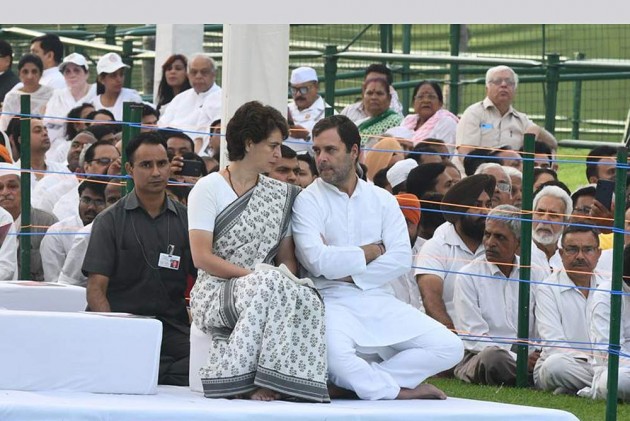 Congress president Rahul Gandhi and, perhaps, his sister and party’s general secretary Priyanka Gandhi Vadra, have good reasons to step down from their official position in the party. It is irrelevant whether the Congress party failed Rahul, or the helmsman sunk the boat. In its present, vastly emaciated state what is relevant is creating conditions for the party’s revival. In an organisation where, for decades, this responsibility has devolved on members of India’s first family, the primary condition for even contemplating a revival is to cut this umbilical cord. That would send a clear message to the rank and file that the Congress party can and will revive only if the men and women in the party are interested and willing to work for it.

Great literature is replete with stories of people fleeing their family to master their fate, find their own fortune and return as a conquering hero. Similarly, men and women of the Congress party must cut the knot that binds them to such dependence and test the political waters on their own strength.

The party has flunked four big and several small tests in the last five years. It was driven to 44 Lok Sabha seats in 2014; reduced to a cipher in the high-stakes Delhi assembly election in 2015; abjectly routed in the Uttar Pradesh assembly elections of 2017 in alliance with Akhilesh Yadav’s Samajwadi Party; and now reduced to 52 MPs in the General Election of 2019, where 23 of the seats were won from the southern states of Kerala and Tamil Nadu.

In over a dozen states, the Congress failed to win a single seat. It has one seat – Sonia Gandhi’s Rae Bareli -- in Uttar Pradesh. Barring Kerala, where it bagged 15, including Rahul Gandhi’s from Wayanad, it could not rise to touch double digits in any other state. For its eight seats in Tamil Nadu, thanks to the DMK and its chief M K Stalin for projecting Rahul as the UPA’s choice for Prime Minister. Only the eight seats it won in Punjab, along with the 15 in Kerala, are worth reckoning as the outcome of its own efforts. The other ones and twos in its account are those that fell through the cracks of the Modi wave.

In such a situation, the Congress party’s worst mistake would be to assume that having hit rock bottom, from here on, it can only move up; and, the best way to go would be to continue to be led by Rahul, Priyanka and Sonia Gandhi. The Congress must recognise that it cannot expect to revive or reposition itself for a better future by wearing the mantle of soft Hindutva.

When the party sits down to introspect, it must think, and think hard about how to keep itself relevant and plot carefully every step for re-inventing itself. Otherwise, it faces certain oblivion. When the party is no longer family property, there might be renewed interest in its survival, in recasting and revitalising the party structure, boosting membership, identifying issues, making its presence across the country more visible and more actively felt, and promoting new faces representative of the crying need for new politics.

The Congress party must ponder how it can make itself useful for the rise and success of new democratic forces; and, not see itself as a mere electoral enterprise. The party has to reshape and sharpen itself for re-emerging as an instrument of public usefulness. It has to think beyond the Gandhi family to re-invent, repurpose and redirect itself to deal with the challenges ahead. If it doesn’t, the Congress is unworthy of even the expensive burial it extracts in every election.

The grand 134-year-old party’s journey of a thousand miles should begin with the single step of walking out of the family.

(The writer is a political and foreign affairs commentator. Views expressed are own)