Congress workers led by Rajya Sabha MP Digvijaya Singh on Wednesday chanted the name of Lord Ram some distance away from BJP MLA Rameshwar Sharma's home here in Madhya Pradesh in protest against his statement asking people to break the knees of Congressmen. 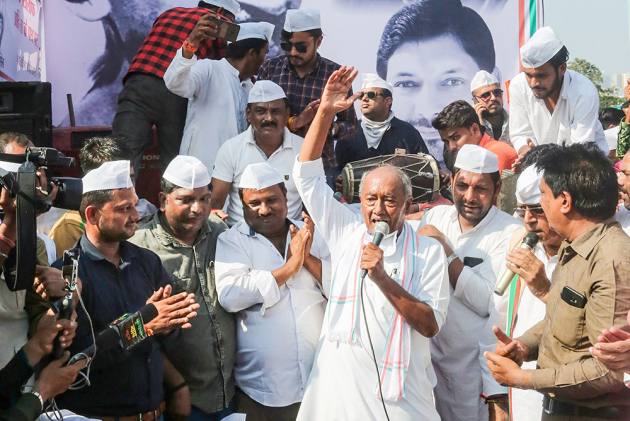 Congress workers chanting 'Ramdhun' (Lord Ram's name) started marching from the statue of Mahatma Gandhi on the Minto Hall campus, about one km away from Sharma's house, but police stopped them midway.

Singh had announced to stage a protest at Sharma's house and chant Lord Ram's name after a video clip of the MLA, who represents Bhopal Huzur seat, went viral.

“Digvijaya Singh came here, has he done anything?… Break the knees if any Congressman comes here,” Sharma had purportedly said.

The BJP leader later clarified that he had made these remarks about a government land worth Rs 20 crore which was sold by a Sarpanch of Kalkheda village. Sharma had alleged that Singh was protecting the sarpanch.

After Singh's announcement of staging the Ramdhun protest, Sharma made elaborate arrangements at his house, saying "he is welcoming the devotees of Lord Ram". Since Wednesday morning, Sharma's supporters gathered at his residence in large numbers and chanted Ramdhun and recited Ramcharitmanas with music groups.

Sharma had also arranged for lunch of protesters and decorated his house with welcome gates and saffron flags. On the other hand, Congress MLA from Bhopal South-West constituency PC Sharma told PTI that the party workers were stopped midway by the police when they were walking towards the BJP legislator's residence.

“We recited 'Ramdhun' at the place where police stopped us. Rameshwar Sharma got scared, his ego got destroyed and he was welcoming us with Halua Puri. Lord Ram and Mahatma Gandhi are the powers that destroy one's ego,” PC Sharma said while claiming that 5000 people participated in the protest.

Digvijaya Singh tweeted in the morning, “This is the victory of non-violence over violence. The BJP MLA, who wanted to break the knees of Congressmen, kneeled in front of the party workers! Giving invitation for -Halua Puri- to Congress workers. Thank you.”
Police had put up barricades on all the roads leading towards Sharma's house to avoid any untoward incident, an official said.