Rahul is also likely to participate in ‘prabhat pheri’, which will start on Tuesday, and culminate on Gandhi Jayanti on October 2. 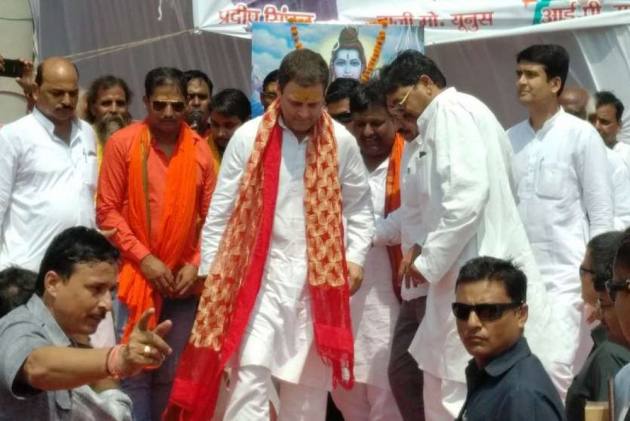 Congress president Rahul Gandhi was welcomed with 'Shiv-Bhakt' posters as he arrived in his parliamentary constituency of Amethi on Monday. This is Rahul's first visit to Amethi after the Kailash Mansarovar yatra.

Gandhi who is on a two-day visit to Amethi is scheduled to attend a meeting with district officials and discuss the progress of other works undertaken in the constituency.

During his visit, Gandhi will also address women of Self-Help Groups near Fursatganj, lay foundation stone of projects at Jias and then address a meeting with about 150 gram pradhans from different areas of the constituency.

Speaking to India Today, Congress leader and MLC Deepak Singh said, "There is excitement in Amethi after Rahul Gandhi visited the Kailash Mansarovar and he has also encouraged many people to go there. The Congress president is religious and respects people from all sections of the society. He is the most popular leader and his affection for his constituency is known to everyone."

Rahul is also likely to participate in 'prabhat pheri' which would start on Tuesday and culminate on the Gandhi Jayanti on October 2nd. Under this programme, party workers will march in the villages to spread the message of peace and communal harmony in the society.

The Congress chief announced his intention to undertake the pilgrimage after a mid-air scare when his plane plunged hundreds of feet during the Karnataka election campaign in April and left for Mt Kailash on August 31.

The pilgrimage was aimed at seeking the blessing of Lord Shiva for prosperity and success of the country and its people, Congress chief spokesperson Randeep Surjewala had said.

In Amethi, the special welcome by 'kanwariyas' was organised by party's block president Indrapal Mali who is also the president of the 'kanwariya' union of the area.

in his parliamentary constituency Amethi on Monday with 'shiv bhakt' posters.