PM Narendra Modi in 2015 declared 26 November as Constitution Day while laying the foundation stone for Dr B R Ambedkar's Statue of Equality memorial. 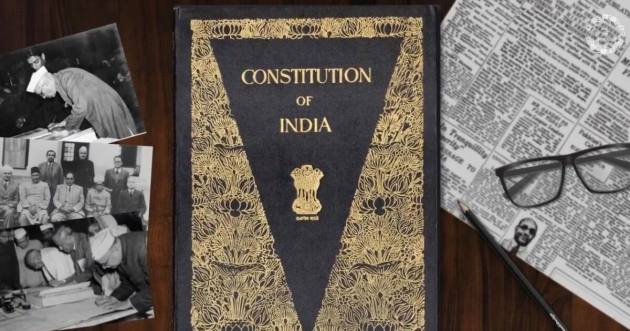 In a bid to commemorate the adoption of Constitution of the independent India, 26th of November is celebrated as the Constitution Day of India. This year,  it marks the 72nd anniversary of the historic event that marked the dawn of a new era back in 1949.

The BJP-led government declared 26th November as the Constitution Day to acknowledge and respect the contribution of the framers and to enlighten people on the prominent values that the constitution accommodates.

Reading of the Preamble to the Constitution to reaffirm our commitment to uphold and adhere to its ideology is an integral and imperative part of the celebrations. Other activities including Talks/Webinars focusing on constitutional values of the Indian Constitution also gets organised every year. Considering the prevailing atmosphere of the deadly Covid-19 Pandemic, ensuring strict adherence to the safety protocols and guidelines is mandatory though.

History behind the birth of Indian Constitution- The Chronology

On 15 August 1947, India earned independence, and on 26 January 1950, we celebrate Republic Day to mark the enforcement of  the Indian Constitution. Back in 1934, the demand of the Constituent Assembly was made.  M.N. Roy, a communist party leader, introduced the idea. It was taken up by the Congress party and finally, in 1940, the demand was accepted by the British government.

During this time,  total of 11 sessions were convened and met for around 166 days.  This two months, between the adoption and enforcement of the Indian Constitution were deployed for thorough reading.  Translation from English to Hindi was also done during this time.

On 29 August 1947, a Drafting Committee was constituted to prepare a Draft Constitution with Dr. B.R. Ambedkar as the Chairman.

On 26 November, 1949, the Committee had finished their work. On 24January 1950, the process was completed and the members pf the committee signed two handwritten copies of the document. One each in Hindi and English.

On 26 January, 1950, the Constitution of India came into force and became the law of the land.

What is the Preamble to the Constitution of India?

“WE, THE PEOPLE OF INDIA, having solemnly resolved to constituteIndia into a SOVEREIGN SOCIALIST SECULAR DEMOCRATIC REPUBLIC and to secure toall its citizens: JUSTICE, social, economic, and political; LIBERTY of thought, expression, belief, faith, and worship; EQUALITY of status and of opportunity; and to promote among them all FRATERNITY assuring the dignity of the individual and the unityand integrity of the Nation; IN OUR CONSTITUENT ASSEMBLY this twenty-sixth day of November,1949, do HEREBY ADOPT, ENACT AND GIVE TO OURSELVES THIS CONSTITUTION.”

Socialist, Secular, and Integrity- these three words were included later when it was amended by the 42nd Constitutional Amendment Act in 1976.

According to the Constitution, India is a sovereign, socialist,secular, democratic republic, assuring its citizen's justice, equality, andliberty and endeavours to promote fraternity.

India’s constitution holds the reputation of being the longest written constitution in the world. It took around 2years, 11 months, and 17 days to complete the Constitution.